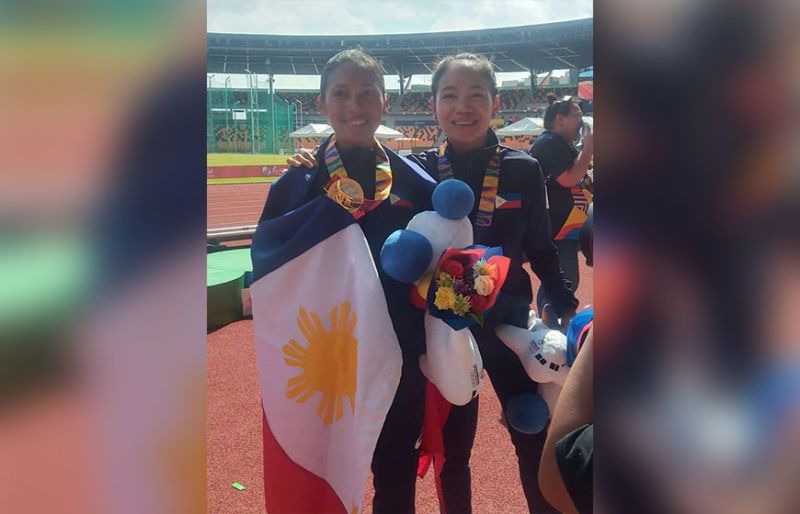 LUCKY BREAK. Christine Hallasgo (left) and Mary Joy Tabal celebrate after a 1-2 finish in the women’s marathon. The two were running second and third before the leading Indonesian runner collapsed in the final 400 meters. (SunStar photo/Richiel S. Chavez) 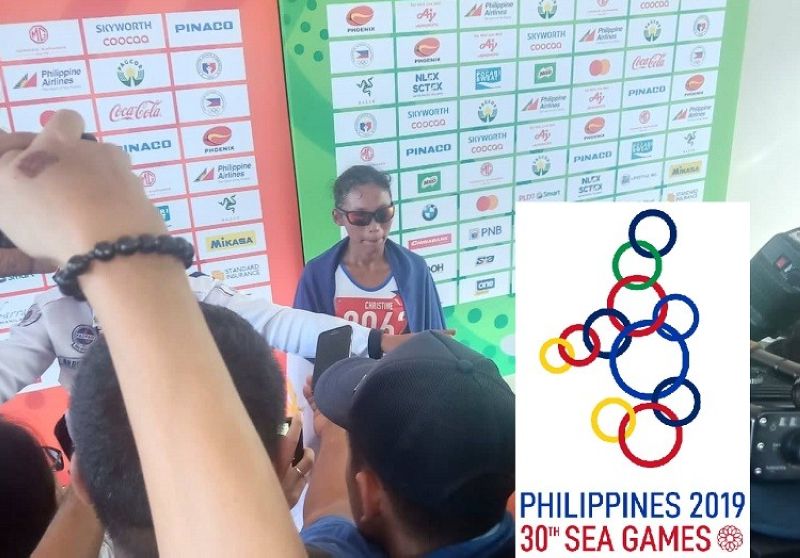 TARLAC. Hallasgo talks to the media after winning the first gold medal for the medal-rich track and field. (Photo by Richiel Chavez)

Tabal and Hallasgo were behind Odekta Elvina Naibaho of Indonesia in the final phase of the race.

But the Indonesian runner collapsed in the final 400 meters of the course due to sheer exhaustion, paving the way for a 1-2 finish for the host country.

It was sort of an upset as the SEA Games debutant Hallasgo of Malaybalay, Bukidnon grabbed the gold medal with a time of 2 hours, 56 minutes and 56 seconds, dethroning her compatriot Tabal.

The Cebuana heroine settled for a silver medal and collapsed due to exhaustion after crossing the finish line in 2:58:49. The 30-year-old Tabal was brought to the medical room and recovered just in time for the awarding ceremony.

Vietnam’s Pham Hong Le Thi came in at 3:02:52 and joined the Filipinas at the podium spot.

“In the last loop, there was a break away from our counterparts. What I had in mind was for the Philippines to win a medal. It could be any of us two runners as long as our country gets a medal,” Hallasgo said. “I just concentrated and prayed that we could make it in the podium for the country,” added Hallasgo, who suffered from cramps after completing the scorching race which finished at around 9 a.m.

Tabal was gracious and expressed happiness for her fellow Filipina athlete.

“I’m happy for Christine because it was her first SEA Games and she won the gold medal,” she said. “I’m also happy that the Philippines won the gold and silver medals.”

This was Tabal’s third SEA Games. She won the silver medal in the 2015 Singapore Games before winning the gold in the 2017 Kuala Lumpur Games.

Tabal was leading halfway in the race and was neck-to-neck with Le Thi with both clocking 1:22:19 in the first 21K of the race.

The Indonesian runner started to take over in the last 10K of the race.

Indonesia’s and Vietnam’s runners were leading at the last 5K mark as the two Filipinas fell to third and fourth places. Hallasgo and Tabal overtook the Vietnamese in the next kilometer to stay within striking distance of the Indonesian.

A sudden turn of fate in the last 400m gave Hallasgo the chance for the gold medal as Tabal followed two minutes after for the silver medal.

“Everyone gave their best and I was happy that all of us finished safe,” said Tabal.

Indonesia and Vietnam hauled 32 golds and 38 silvers each and are neck-to-neck for the second spot with only one bronze separating the two nations.

Singapore is at fourth place hauling in 26 golds, 19 silvers and 27 bronzes and is followed by the overall defending champion Malaysia with 23 golds, 16 silvers and 26 bronzes.