Cortes to captains: Clear roads or step down 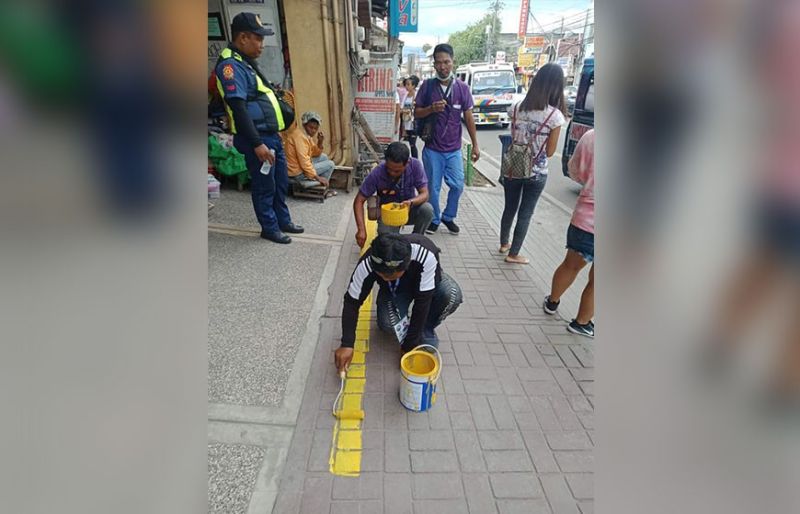 OFF-LIMITS. Mandaue City Hall personnel make a demarcation line to indicate the portion of the sidewalk that should be free of any obstruction. (Photo/Mandaue City Legal Office-Enforcement Unit)

FAMILIARITY of the barangay officials with the residents and threats to their safety make it difficult to conduct clearing operations in interior roads in Mandaue City, the barangay captains said.

The city’s 27 village chiefs raised their concerns on the intensified clearing of roads and sidewalks during a meeting with Mayor Jonas Cortes on Thursday, Dec. 5, 2019.

Casili Barangay Captain Vidal Cabatingan said their task force members know most of the people in the barangay, making it difficult for them to enforce the rules.

He requested the Mandaue City Legal Enforcement Unit (MCLEU) to be present during their clearing operations for a more effective implementation since the MCLEU personnel are not acquainted with the residents.

He said there were times when some residents whose structures encroached on the sidewalk used force when they confronted the barangay task force members.

Manatad lamented that their barangay personnel felt their safety was at risk.

During the meeting, Cortes said he noticed that the barangay captains are reluctant to implement President Rodrigo Duterte’s order to reclaim all public roads and sidewalks and clear them of obstruction.

“There needs to be political will to reclaim (the roads). Based on the President’s order, we need to reclaim our roads and our sidewalks. Kay daghan man ang repercussions kung mag-demolish ta; daghan ang mahadlok ikiha (Because there are plenty of repercussions if we demolish the structures; many fear they will be sued),” said Cortes.

The barangay officials should not be afraid to remove all illegal structures and other obstruction from the roads and sidewalks, Cortes said, adding that it is their responsibility to implement the law without fear of any political backlash.

The ordinance supports the strict implementation of the clearing operations as it carries a bigger penalty.

If approved, those who violate the ordinance will be fined P3,000 on the first offense. Succeeding violations would result in the confiscation of articles, goods or merchandise, impounding of subject vehicles and a fine of P5,000 or imprisonment of not more than 15 days.