MANILA. Cast members of the movie Culion in a press conference on December 5, 2019 at Novotel in Araneta Center. (Edmund Silvestre) 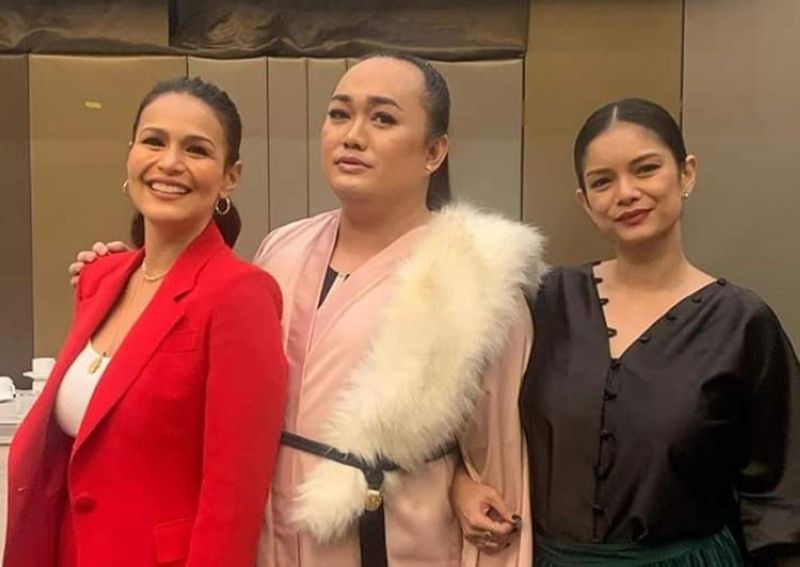 “CULION,” the highly-anticipated Metro Manila Film Festival (MMFF) entry penned by Ricky Lee and directed by Alvin Yapan, will have its world premiere in Culion, Palawan -- the setting of the historical period drama -- on December 14 in honor of the island, which endured the stigma brought by its historic past as home to the biggest leper colony in the world.

“We promised the people of Culion that they will be first to see the finished product with a red carpet premiere,” said executive producer Gillie Sing of iOptions Ventures Corp. in a press conference Thursday, December 5, at Novotel in Araneta Center, Quezon City.

Sing, with her husband and co-executive producer Peter Sing, and producer Shandi Bacolod, moved heaven and earth to persuade the local leaders and residents of Culion to allow them to shoot on the island and tell the world about its harrowing story during the American occupation in the 1940s when no cure has yet been found for the then dreaded condition now known as Hansen’s disease.

“We are overwhelmed and excited for this movie,” Sing told the press and bloggers, “and we are flying to Culion some of the cast members, many of whom have made friends with the locals. Help us break the stigma of the past by telling the world about Culion that is rich in story and rich in history.”

The Palawan premiere will be held 11 days prior to its theatrical debut nationwide on December 25, along with seven other major entries at the two-week Metro Manila film fest. The cast will also participate at the annual Parade of Stars slated December 22 in Taguig City.

At the Novotel press conference, cast member Nico Locco, who plays an American soldier afflicted with leprosy, summed up the motion picture’s essence for the entire cast and crew: “We are not just representing a film, we are representing the people of Culion and that’s something that is much larger and more meaningful. Learning the story of Culion and learning that there’s much more to see on the screen for entertainment value, we created something that is memorable especially for the people who went through an unbelievable struggle at the time.”

“I highly recommend that movie as I have seen the script and I made sure it is a truthful account of the island and its struggle,” Cunanan was quoted as saying.

De Vera said the entire municipality is thrilled about the December 14 world premiere as it will help boost the island’s tourism endeavors.

Ricky Lee, who also wrote the classic pictures Himala, Moral, Brutal, Karnal, Salome and Jaguar, said “Culion” has all the ingredients of a great film that resonates with sadness and sympathy that cross generational barriers. Neil Daza, director of photography, immortalized the beauty of the island as the flick’s backdrop.

More than the film’s artistic and technical achievements, Lee said he is moved “by the courage, hope and resilience of the people in the leprosarium to live even if they are condemned to stay in that secluded island for the rest of their lives.”

“It will always be a relevant theme,” Lee said.

Meanwhile, Sing disclosed that “Culion” has about 150 members of cast and crew based on the insurance coverage she took for the two-week filming on the picturesque island. The producer will not divulge figures about the production budget except by saying “it wasn’t an independent movie budget.”

“This is more than just a movie for me and my husband (Peter),” she stressed. “This is a passion project, that’s why we didn’t hold back when it came to expenses because we really wanted to make sure that we’ll have a very good product.”

“You all know by now how we worked hard for this and we are very confident at the quality of our movie,” Sing also said. “Matatalino na rin ang ating mga manonood and I know we have an audience for Culion.”

After MMFF, “Culion” will make the rounds on the festival circuit abroad, according to the producers.

The Culion Museum and Archives, a two-story building adjacent to the sanitarium, was re-opened and re-launched on November 12. It houses historical relics on the medical history of leprosy control including the island’s medical quest to find a cure.

In 1904, the American Governor General Luke Wright declared Culion a leper colony under Executive Order 35 due to its ideal distance from populous urban centers. Its services commenced upon the arrival of the first batch of patients from Cebu on May 27, 1906.

In 1998, the island was declared leprosy-free as there were no more local cases within the municipality. World Leprosy Day is observed globally every year on the last Sunday of January.