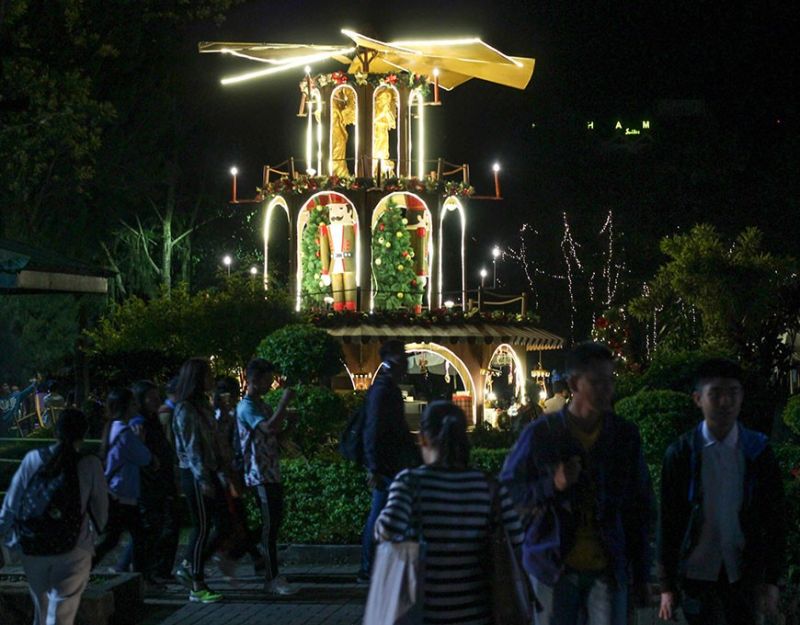 BAGUIO. The Rose Garden at Burnham Park in Baguio City serves as an attraction for both visitors and locals during the 40-day staging of An Enchanting Baguio Christmas. (Jean Nicole Cortes)

Vergara issued the statement after a heated debate during Monday's (December 2) City Council session on the ongoing activities at the Rose Garden by the BTC dubbed as "An Enchanting Baguio Christmas," a 40-day series of activities to highlight the Christmas season.

"The An Enchanting Baguio Christmas program is a joint effort with the City Government. At the very outset, we at the BTC welcomed and accepted the responsibility of conceptualizing, planning, and executing all Christmas programs and events, mindful that the task needs a shared effort between the government and the private sector. In all aspects, we worked unselfishly, gladly coordinating with City Government offices directly concerned, striving hard hand-in-hand with our public counterparts. We have a singular aim: to bring about a Baguio Christmas celebration that residents and visitors alike will welcome to their hearts' content," Vergara said.

Vergara clarified any selling done in the premises is merely incidental, meant simply to complement the ambiance of an enchanting Christmas setting sought to be simulated.

She added the principal aim is not to make anyone profit from its use, but overall, to make the Rose Garden an enchanting place of fun, fellowship, amusement, and family-oriented activities.

Vergara's statement came after calls for investigation were made by the City Council Monday, December 2, asking Baguio Mayor Benjamin Magalong to look into the BTC activities.

The BTC head said the chalets were built from sponsors' partnership proceeds and were provided to interested participants as exhibition and marketing outlets for strictly curated and carefully selected products.

"Absolutely, no rental charges were imposed," she added.

Vergara also addressed the issue on selling of liquor, saying: "Perhaps, carried away by the happy ambiance, some outlets even went overboard and sold beer and mixed beverages. This was stopped when reported to us right on the second day, precisely because it transgressed the anti-liquor city ordinances. We have since added police visibility in the area purposely to make sure this is complied with."

Councilor Mylen Yaranon said the Enchanted Christmas in Baguio Event was approved by the City Council on October 28.

"We have an ordinance not to allow trade fairs at Burnham Park. It is up to the executive to investigate if the ongoing Christmas Fair is in accordance with the laws," Yaranon added.

Calls to close the Christmas fair were abated when Sembrano moved to invite BTC members to next week's session.

Vergara said the BTC felt disappointed over what have been reported.

"We all realize that putting together An Enchanting Baguio Christmas is hardly a breezy walk, given the usual challenges along the way -- the magnitude of the task, the scale of aspirations sought to be achieved, the scarcity of time and resources at our disposal. Hard work, focused determination, and yes, self-sacrifice were invested voluntarily to make it happen, often times by self-abnegation," Vergara added.

Vergara said at the end of the activities, the BTC will be making public a detailed accounting and auditing report of the funds used to make the Christmas celebration happen.

"Let it be noted though that government funds were shoe-string at the very start and the BTC had to source out added funds through meritorious sponsorships to get the huge project going," Vergara said.