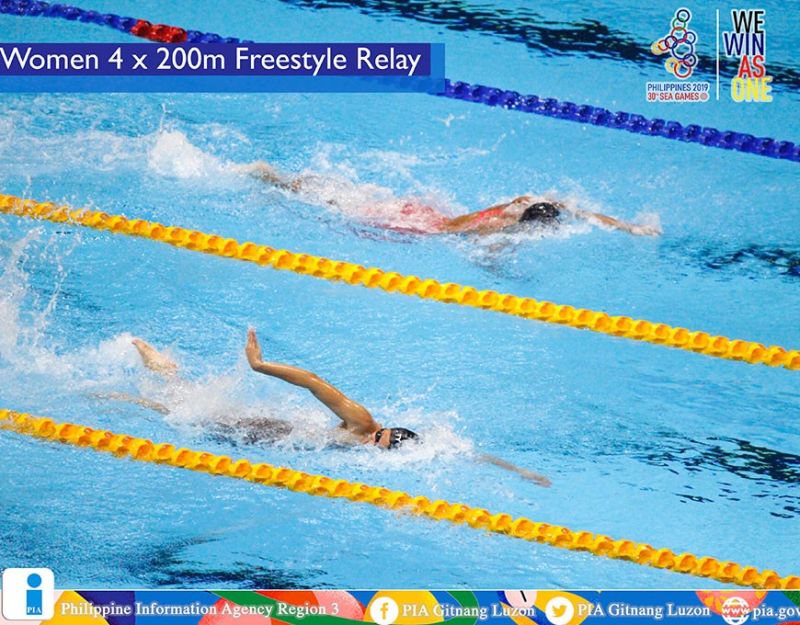 Singapore bagged the gold in that event while Thailand took home the silver.

Singapore dominated anew the second day of the swimming competitions at New Clark City Aquatics Center, winning four out of the six gold medals up for grabs.

Elena Pedersen won the gold in the women’s 50m Backstroke. Thi Anh Vien Nguyen of Vietnam got the silver and Anak Agung Istri Ratih of Indonesia settled for the bronze.

Moreover, it was a 1-2 finish for Singapore in men’s 50m butterfly as Tzen Wei Teong landed the Gold and Joseph Isaac Schooling the silver. Glenn Sutanto of Indonesia ended with a Bronze.

Christie May Mun EE Chue topped the women’s 200m breaststroke. Phiangkhwan Pawapotako of Thailand celebrated with a silver and Jinq EN Phee of Malaysia made her country proud with a bronze.

Meanwhile, Vietnam bagged the two other gold up for grabs on Day Two.

Huy Hoang Nguyen nabbed the Gold in the men’s 1500m freestyle. Aflah Prawira of Indonesia got the Silver and Huu Kim Son Nguyen also of Vietnam settled for the Bronze.

Hung Nguyen Tranl landed the gold in the men’s 200m individual medley. Yi Shou Darren Chua of Singapore got the silver and Triady Sidiq of Indonesia settled for the bronze.

In the first day of the swimming events where a total of seven golds were at stake, Singapore captured four Golds, Vietnam had two while the Philippines got one. (PIA-Central Luzon)