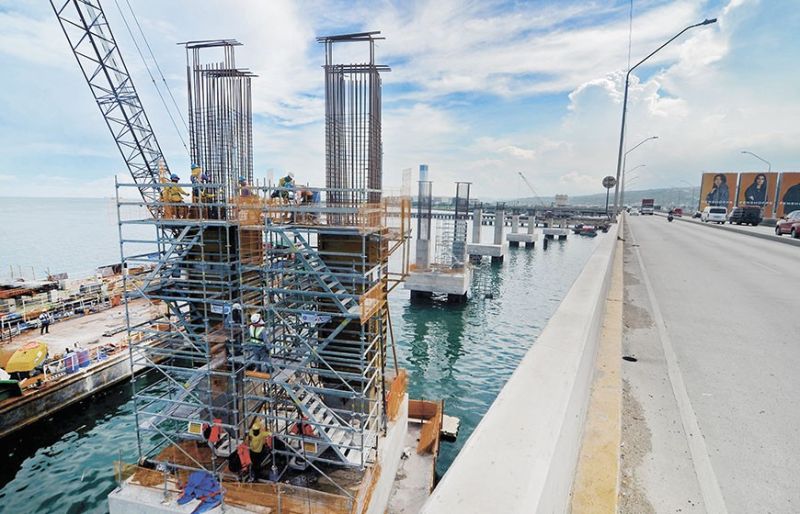 WITH the Philippines prone to natural calamities, builders of the Cebu-Cordova Link Expressway (CCLEX), better known as the third Mactan-Cebu bridge, assure that it will be the first in the country to withstand 7.8 magnitude earthquakes and super typhoons with winds of up to 250 kilometers per hour.

COWI-DCCD project manager Robert Uthwatt told reporters in a press conference and site visit on Friday, Dec. 6, 2019 that seismic isolation lead rubber bearings will be installed underneath the foundation and the two main towers of the bridge to shield it from a massive quake.

COWI-DCCD is the design consultancy firm behind the third bridge project.

Uthwatt said the rubber bearings will move with the earth, which effectively makes the main structure of the bridge earthquake resistant.

The support beams or girders are also designed to move freely, he said.

“If we don’t allow the girders to move freely, the pylon goes with them so (what we did) is we put the rubber bearing which means it can slide,” Uthwatt said.

The modern technology used in building the bridge will also allow it to withstand strong winds, waves and storm surges, he added.

The twin pylons or the two main bars supporting the structure have a circular design so that wind can freely pass through the bridge.

If the bridge were to be made of concrete all the way up, it will be more likely to crack, Uthwatt said.

Construction of the 8.5-kilometer tollway bridge is now 47.32 percent complete including its engineering works and procurement processes.

Uthwatt envisions the two 145-meter main pylons as an addition to the list of Cebu’s tourist attractions as the support beams will have four stainless steel crosses on each side to symbolize Cebu’s significant role as the cradle of Christianity in Asia.

The country will commemorate 500 years of Christianity in 2021, with Cebu at the center of the celebration as the first baptism was held here by Spanish missionaries in 1521.

The crosses will light up at night beginning August 2021 when the bridge opens to motorists.

Cebu Cordova Link Expressway Corp. (CCLEC) president and general manager Allan Alfon assured that the ongoing construction of the bridge will not cause any disruptions to marine traffic and the bridge itself will not block large vessels passing through the area.

The bridge will stand at 51 meters above sea level.

“We made sure that the marine traffic in the Mactan Channel is not affected with the ongoing construction of the bridge,” said Alfon.

Pier tables are now being prepared which include the construction of the bridge’s deck, cable stays, and upper pylons.

As the off-ramp of the bridge is located at the South Coastal Road Properties (CSCR), around 400 meters away from the Cube of the SM Seaside City, Alfon said they are continuously coordinating with the Department of Public Works and Highways (DPWH) and transportation office for a comprehensive traffic management plan.

The CCLEX will have two lanes in each direction and will cover the on and off ramps connection along the CSCR.

The P30 billion link project is expected to decongest traffic on the two existing Mactan-Cebu bridges as it will provide additional access to Mactan Island and the Mactan-Cebu International Airport (MCIA), the country’s second busiest airport.

The bridge will also improve Cebu’s productivity through efficient mobility since it can accommodate up to 50,000 vehicles daily.

A subsidiary of Metro Pacific Tollways Corp., CCLEC will build, operate and maintain CCLEX under a joint venture agreement with the local governments of Cebu City and Cordova town.

For now, 1,906 people are working to finish the link project. (JJL)