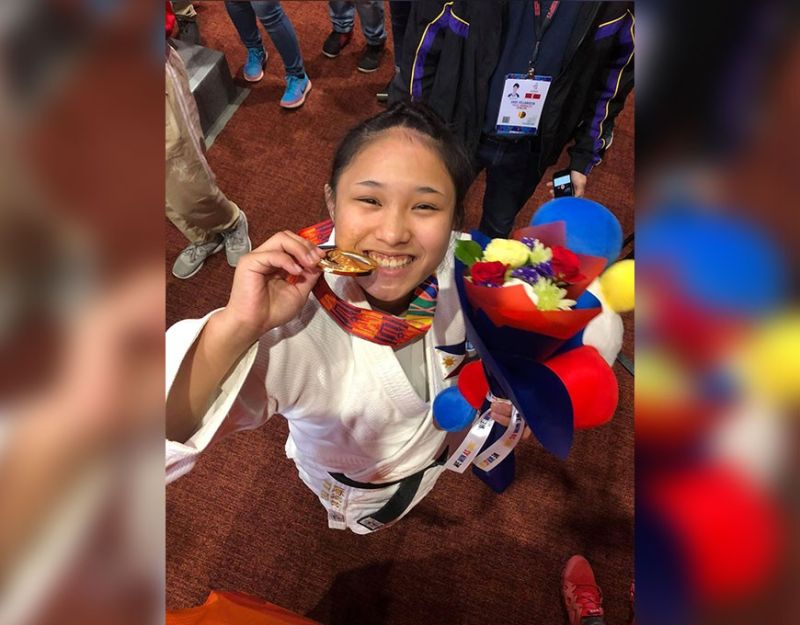 MANILA. Filipino-Japanese Mariya Takahashi, whose mother hails from Maragusan in Compostela Valley, smiles as she bites her gold medal that she won in the women's judo-70 kilograms during the 30th Southeast Asian (SEA) Games Friday, December 6, at the Laus Group Events Center in San Fernando, Pampanga. (Photo from Lynlyn Takahashi’s Facebook)

The 18-year-old, whose Filipino mother Lynlyn hails from Maragusan in Compostela Valley, subdued Surattana Thongsri of Thailand via ippon in the last match.

Takahashi clinched the gold for scoring the most points in the round-robin format competition, while Thongsri settled for the silver. Indonesia’s Kakihara I Gusti Ayu, who is also based in Japan, copped bronze.

Ayu, according to Lynlyn, has defeated Takahashi in a Japan tournament.

Takahashi, in a Facebook Messenger interview that was translated by her mother, said, "I felt nervous but I was confident, believing to win and defend my title."

She thought she lost the match but strived to win.

"First, thank you to the Almighty Father who gave me strength and to my ever-supportive family for being there always to boost my self-confidence to win and to the PSC (Philippine Sports Commission) for supporting the athletes," the Kogakkan University college freshman said.

Takahasi, who could understand a few Visayan words, was born in Japan but studied Grades 1 and 2 in Panabo City before she and her mother joined her father Tomoki back to Japan.

She started playing judo in fourth grade and in 2017, at the age of 16, she won her first SEA Games gold medal.

The Philippines national judo team collected a total of three golds (Takahashi, Kiyomi Watanabe, and Shugen Pablo Nakano), one silver and seven bronzes so far as the team competition is ongoing as of press time Saturday, December 7.