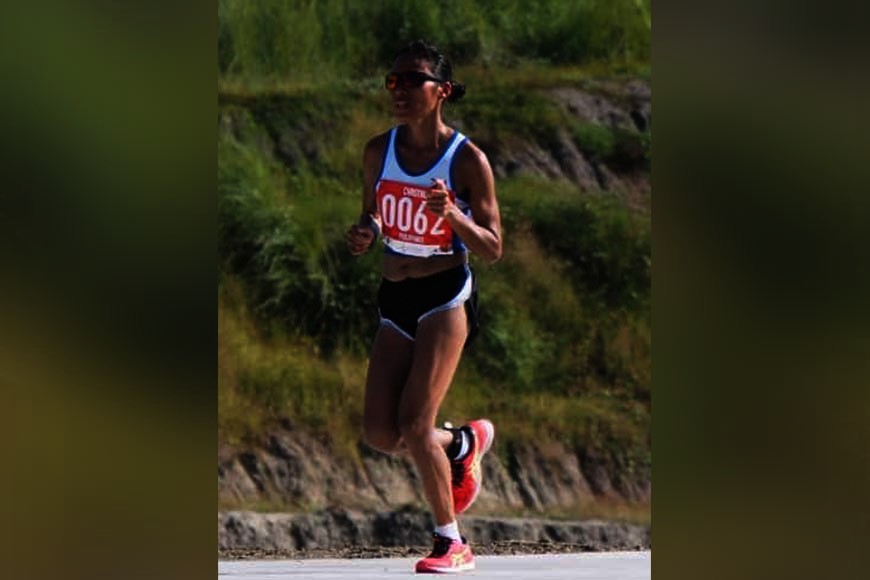 MANILA -- From the steepest mountains of Bukidnon to heirarching the throne as queen of the 30th Southeast Asian Games marathon.

How the 27-year-old SEAG debutant Christine Hallasgo snagged the feat did not surprise anymore her townmates from Malaybalay City, Bukidnon.

“Alang-alang dili modaug taas kaayo nga bukid iyang sakaon ug kanaugon matag adlaw kay didto sa tumoy sa bungtod ilang pamilya nagpuyo sukad adtong gamay pa siya. (There’s no reason she will not succeed as she used to hurdle every day the steepest mountains in Bukidnon’s capital city uphill and downhill as her family has been living there since she was a child),” said Malaybalay City Councilor Erwin Damasco of Hallasgo, now a mother of a 3-year-old.

A last-minute entry to the Philippines’ track and field delegates, Hallasgo did the impossible when she upstaged Cebuana compatriot Mary Joy Tabal, an Olympian and the defending champion, in the punishing race held in the village of Capas, Tarlac on December 6.

Hallasgo clocked two hours, 56 minutes and 56 seconds in a 1-2 finish by the Filipinas which saw Tabal crumbled in exhaustion after arriving in the finish line at 2:58.49 for second place.

Both of them, however, appeared so “very lucky” to beat the odds as they lagged behind foreign rivals in the last 400 meters when the pacesetting Indonesian Odekta Naibaho and Singaporean Hu Xiuying apparently collapsed and did not finish.

Vietnamese Pham Thi Hong Le, who suffered cramps, surfaced at the New Clark City track stadium with a time of 3:02.52 to take the bronze.

Whatever, Councilor Damasco and those who sponsored Hallasgo as a kiddy contestant then in local races across Northern Mindanao believe that sheer hardwork and, perhaps, “divine intervention” may have worked wonder for the Bukidnon pride’s ascent to the top of SEA Games’ medal podium.

“The gods of the mountains maybe smiling at their native occupant of Higaonon descent. From near Mt. Kitanglad nga bukid nga gitawag og St. Peter in between the boundary of Bukidnon and Butuan there’s a hilly stretch of about 8 kilometers nga daganon permi ni Christine as part of her training regimen. It’s like a 2 hours travel in car away from downtown Malaybalay. For a long time, her patience and sacrifices were finally rewarded,” Damasco told Sun.Star Cagayan de Oro.

Now under the guidance of two-time Olympian Eduardo “Bertek” Buenavista, the former Miss Christine Organiza—who stands just below 5-feet tall and took Bachelor of Science in Public Administration at Bukidnon State University-- first gained fame locally when she emerged back-to-back champion in Cagayan de Oro Milo Marathon in 2014 and 2015, shortly after she married Wilmer Hallasgo in 2013.