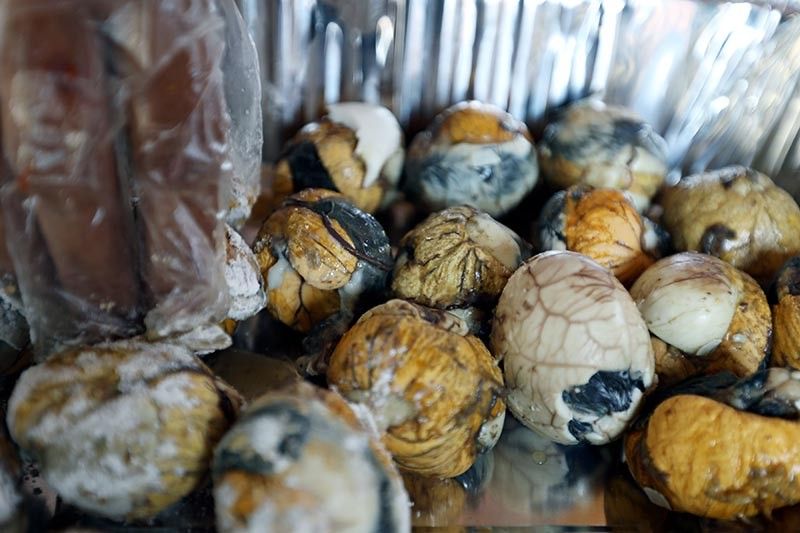 BALUT. The Department of Science and Technology (Dost) developed three breeds of Itik Pinas namely the IP-Itim, IP-Khaki, and IP-Kayumanggi to improve the productivity of the duck industry and develop innovative processing technologies to ensure quality and safety and extend shelf life of duck egg products. (Photo courtesy of PNA)

THE roadsides of the municipality of Carmen in Davao del Norte may be considered as a heavenly place for lovers of balut or the boiled duck eggs. Balut vendors lined the street sides with tables and chairs, waiting for their patrons.

But despite the number of balut stalls in the area, the Department of Agriculture in Davao Region (DA-Davao) claimed that the demand and supply of duck eggs in Davao Region is not yet stable.

With this, DA-Davao collaborated with the Department of Science and Technology-Philippine Council for Agriculture, Aquatic, and Natural Resources Research and Development (Dost-Pcaarrd)’s three-year Philippine Duck Industry-focused Technologies, Innovations, and Knowledge for Livelihood, Income and Food Supply Enhancement (ITIK for LIFE) program.

The program introduces Itik Pinas (IP), a breed of the Philippine native mallard layer duck which was developed by the Dost-Pcaarrd and the National Swine and Poultry Research and Development Center (NSPRDC) of the Bureau of Animal Industry (BAI) and was launched in 2016.

It aims to improve the productivity of the duck industry through the use of IPs, particularly in regions Cagayan Valley, Central Luzon, Calabarzon, Western Visayas, Zamboanga Peninsula, Davao, and Soccsksargen.

Through intensive selection process and breeding schemes of native ducks in the Philippines, BAI director Rene Santiago and his team developed three types of ducks: the IP-Itim and IP-Khaki which will be used for breeding a new species and the IP-Kayumanggi intended to produce eggs for balut and salted egg products.

“The advantages of the IP ducks over that of the traditional Pateros include higher egg production (260 vs. 200 eggs/duck/per/year) and 80 percent of eggs produced weigh 65g or more which is a minimum weight requirement for balut production,” DA-Davao research officer Roldan dela Cerna said in an emailed statement to SunStar Davao.

He said the IP breeds also have a more uniformed bodyweight of 1.1 for males and 1.3 for the females which is an important factor in determining the amount of food to feed them.

“Use of these lines has the potential to increase the profitability of local farmers because of the higher number of eggs produced and production efficiency compared to the traditional mongrel type Pateros duck. [It] will make the local duck industry more competitive in terms of quantity, quality, and efficiency of production,” he added.

He said the agency has distributed IP-Kayumanggi in Carmen and Braulio E. Dujali, Davao del Norte.

Ten farmers in both municipalities were each given 360 IP ducklings with two sacks of duck pre-starter, feeders, and waterers. They have also undergone training and seminars such as basic IP production and management and duck meat processing innovations.

“We focused first in Davao del Norte since they are already well known in duck raising, balut, and salted egg processing. In the meantime, we are looking for another set of cooperators and who are interested to venture in raising Itik Pinas,” dela Cerna said.

He said the IPs given to the farmers are currently in the laying stage.

The IPs are also being studied in a breeder farm in Davao Region Central Experiment Station in Manambulan, Tugbok District.