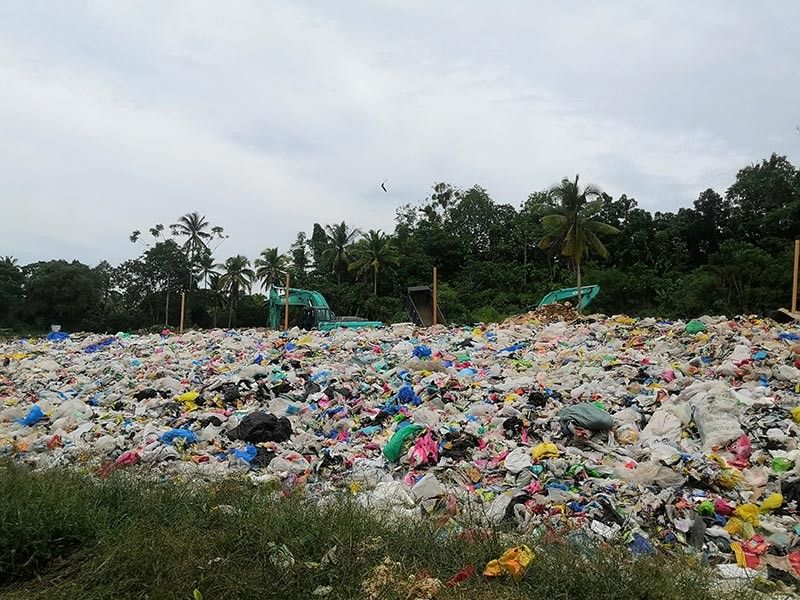 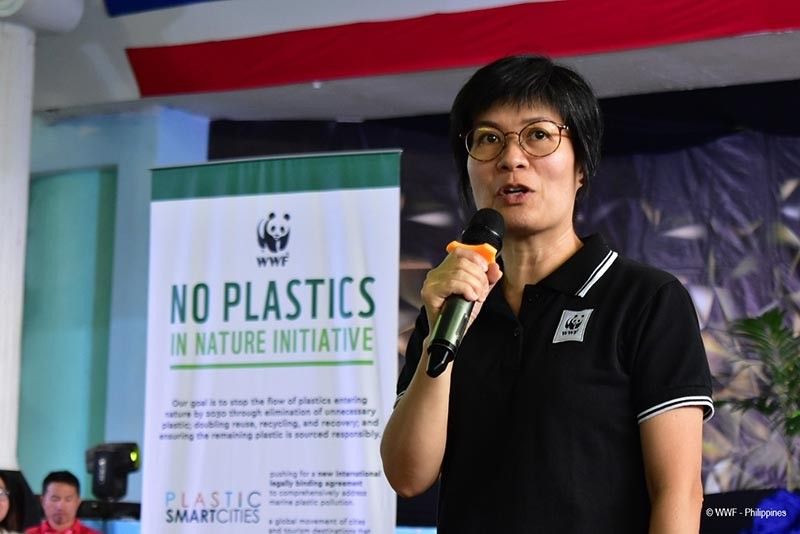 Chrisma Salao, VP for Conservation Programmes, congratulates Samal for being the first city in Mindanao to commit to Plastic Smart Cities movement. (WWF-Philippines) 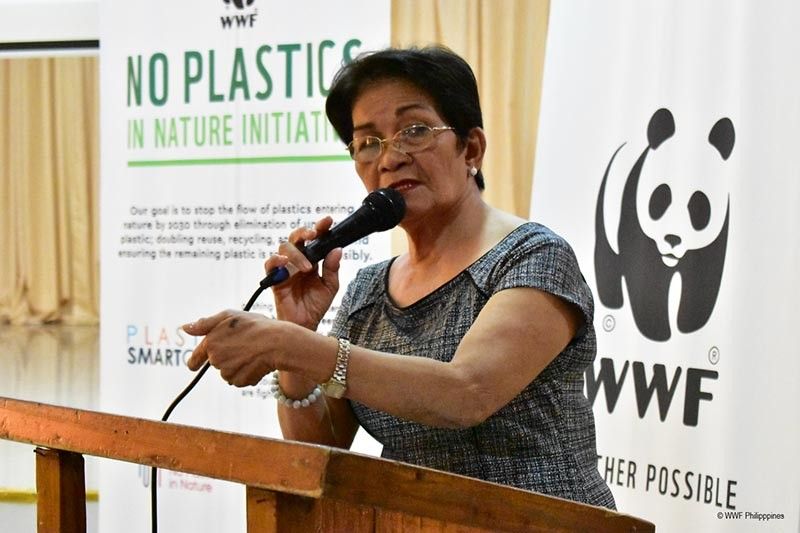 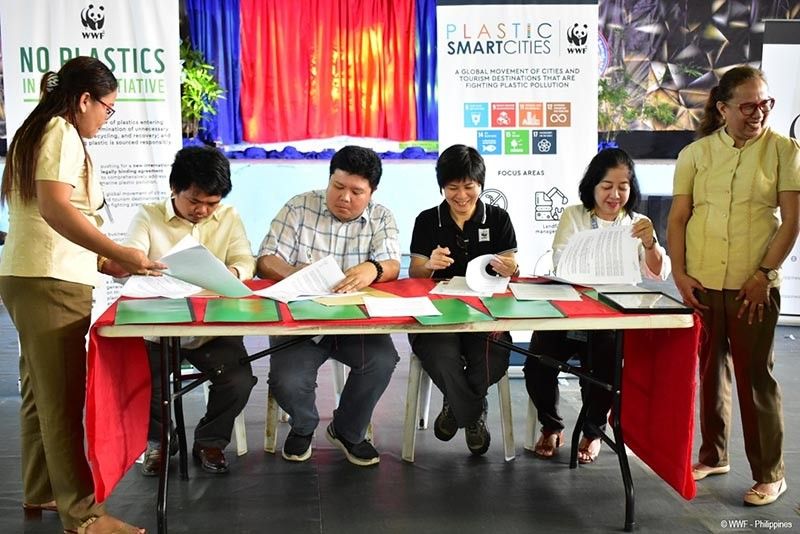 (FROM LEFT) Gie-Arr Valdez - Councilor for Environment, Al David Uy - Samal mayor, Chrisma Salao - VP for Conservation Programmes of WWF Philippines, and lawyer Rosemarie Garde - City Administrator during the signing of the Memorandum of Undertaking between the Samal LGU and WWF Philippines. (WWF-Philippines)

BACK in the '60s, less to no people were using plastics. Fast forward today, some 400 million metric tons of plastics are produced globally.

If before, the general public views plastics as a fantastic invention for convenience, the atmosphere has changed now as more and more people and organizations are joining the movement of a plastic smart world, solving the problem humanity created.

Recognizing the threat brought by plastic pollution, two coastal towns in Davao Region committed to eliminate unnecessary plastic wastes by 2030 by signing up with the Plastic Smart Cities movement initiated by the World Wide Fund for Nature (WWF).

The Island Garden City of Samal in Davao del Norte and San Isidro town in Davao Oriental joined the movement on December 2 and 3, respectively.

At present, there are only three local government units that signified participation in this global war against plastic pollution. Apart from the two mentioned coastal towns, another town that vowed its commitment is Donsol in Sorsogon. The common denominator of the three towns is all are tourist destinations offering rich biodiversity and natural attractions.

The Plastic Smart Cities movement is a global initiative for cities and tourism destinations that are fighting plastic pollution and is part of WWF’s global No Plastics in Nature initiative.

Cities or towns under this movement commit to eliminate plastic pollution in nature by 2030. These areas shall also focus their actions on four areas: reduction of key waste plastics such as sachets, plastic bags, and straws; effective collection and segregation services; improved recycling program; and a better landfill management.

Plastic Smart Cities (or towns) shall develop an action plan within six months from the signing date, and launch a pilot within a designated area with a goal to reduce plastic pollution by 30% within two years. A Chief Plastics Officer shall also be appointed as the city’s or town’s lead person for this initiative.

A city monitoring plan is also expected to be developed by these LGUs to establish baselines and annual targets and shares annual progress on www.PlasticSmartCities.org.

Chrisma Salao, WWF-Philippines Vice President for Conservation Program, said the goal is not to stop all plastic production but rather to stop the flow of plastics entering nature.

“We have been working on climate change adaptation and marine protection projects in the Davao Gulf since 2008. And now we continue this with another approach - eliminating unnecessary plastics,” she said.

WWF data showed an estimate of 80 percent of plastic marine debris comes from land-based sources with a large portion coming from urban areas as polluted waterways carry plastic pollution to the ocean.

For San Isidro town, an average of some five tons of wastes is being collected daily, huge portion of it are plastic wastes. The scenario is same in Samal Island.

“Before this Plastic Smart Cities agreement, we already had our version here, the ‘Dili Nako sa Plastik’ (I am Against Plastic) program, we implemented this because it is alarming how we witnessed dead turtles in our coastal villages with plastics in their internal organs,” San Isidro mayor Justina Yu said.

Meanwhile, Samal mayor Al David Uy said he is hopeful that through reducing plastic wastes, it will help extend the life span of its 12-hectare sanitary landfill in Sitio Sampao, Mambago-A, Samal.

“The challenge would be how we will also encourage tourists to take part in our campaign against plastic wastes,” Uy said. He also cited several cases of dead whales washed ashore in the island that ingested plastic wastes.

“For Davao City, we are still in the process as we are expanding the scope of the projects to more barangays because we only included Barangay 23-C initially but the city council wishes to involve more barangays,” Salao said.

The WWF-Philippines official emphasized their stand is not to eliminate all plastics as it is both unrealistic and unnecessary, but to cut unnecessary plastic production and consumption.

“Our stand is hindi naman totally masama ang plastic, in fact, plastic is such a fantastic product because it is so lightweight, durable, and adaptable but it is also a terrible product precisely of the same reasons. We made all these problems but the solution is also within us,” she underscored.

One key to solving plastic pollution is change in lifestyle. Just like what mayor Yu said, "When my mother buys stuff in the market before, she’s not using plastic bags but a 'bayong (basket)', I think if we can go back to that lifestyle, we can potentially end the problem of plastic pollution.

The problem with plastics has been escalating for decades, a problem that humanity also created. But there is still hope as solution lies within us.