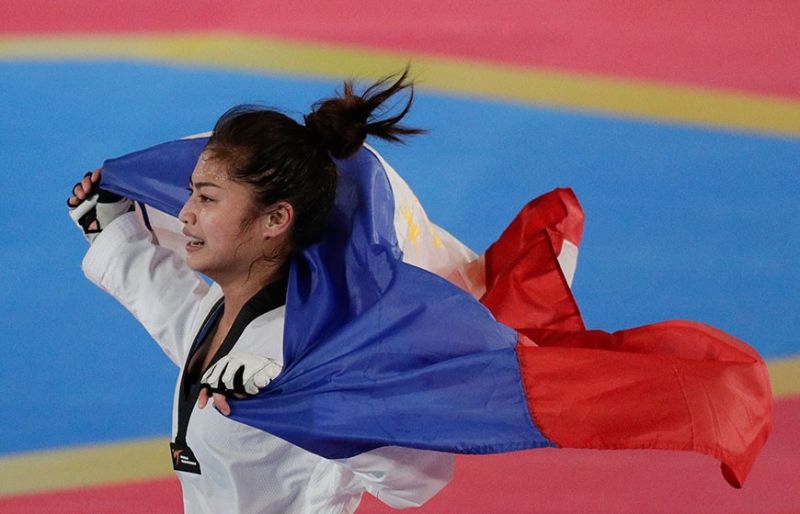 ANOTHER ONE. Pauline Lopez celebrates with the flag after beating Cambodia’s Aliza Chhoeung in the women’s -Under 57 kilos Taekwondo final. (AP photo)

THERE’s no stopping the Philippines from making history in the 30th Southeast Asian (SEA) Games as the host country bagged its 114th gold medal on Monday, Dec. 9, 2019, to eclipse its previous record set 14 years ago.

The Filipinos have virtually clinched the overall championship with a commanding haul of 114 golds, 87 silvers and 91 bronzes as of 3 p.m on Monday, one day and a half before the 11-nation meet ends.

The Philippines’ only overall title came when it racked up 113 gold medals in the 2005 SEA Games, which was also held here.

Returning sports like arnis and dancesport proved to be key factors for Team PHL as the two sports combined for 24 gold medals that pushed the Filipinos at the top of the overall medal tally from the get-go.

While the Philippines was comfortably ahead for the overall championship, the race for the overall second place is in complete contrast as Vietnam and Indonesia are neck-to-neck in the medal standing.

Singapore and defending champion Malaysia are fighting for the last spot in the Top 5. Singapore has a 43-34-51 medal tally while the latter has a 42-45-55 haul.

The recent Cebuana to add up to the Philippines’ gold medal collection was Mandaue, City native Rubilen Amit in the women’s 9-ball on Sunday night at the Manila Hotel Tent. The former 10-ball world champion defeated compatriot Chezka Centeno, 7-3, in the gold medal match after securing five straight racks.

History was also set in the newly-added sport as the Philippines’ Mobile Legends: Bang Bang team bagged the first gold medal in esports after a 3-2 thrilling win over Indonesia.

History was also set over at the Philippine Sports Arena in Pasig City as the men’s volleyball team ended the reign of defending champions Thailand. The PHL will enter the championship round for the first time on Tuesday since 1977.

PHL men’s volleyball team has assured itself of a silver medal—the first medal since a bronze finish in the 1991 SEA Games.

“Winning the gold medal for the Philippines in our home soil is just an awesome feeling and experience. Having our families, friends and other Filipinos cheer us on every shot and every hole, every round was surreal,” said Go, who won the Asian Games team gold medal with Pagdanganan and Yuka Saso last year in Indonesia.

Meanwhile, Cebu’s jin Veronica Garces remained in contention for the gold as she outdueled Prikasih Kadek Ni, 23-10, in the quarterfinals of the Under-45 kilogram women’s taekwondo event at the Rizal Memorial Sports Complex.

Garces dominated the third round, scoring 17 points to overturn a 6-10 deficit.

The 30th SEA Games will wrap up on Wednesday at the New Clark Athletic Stadium in Capas, Tarlac.