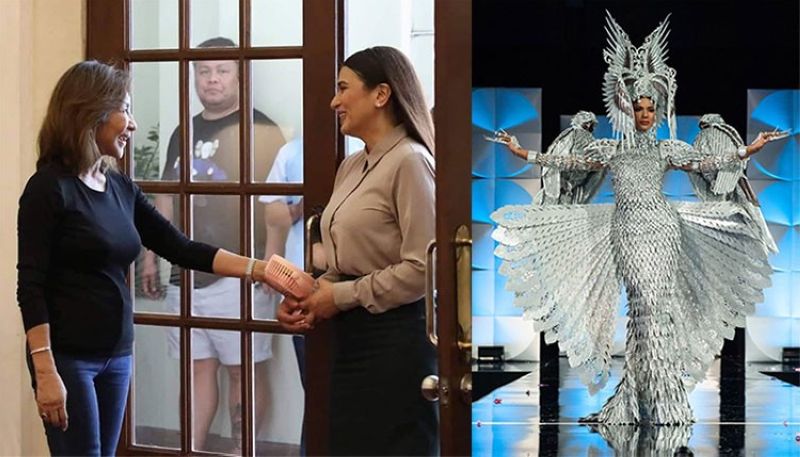 THERE were two governors at Cebu Capitol -- one the real governor, Governor Gwen Garcia, and the other, film fiction governor Zsa Zsa Padilla -- when, according to Gwen's Facebook account Friday (December 6), met and chatted last week about the work of a governor.

Ms. Padilla was reportedly shooting some scenes at the Capitol for a "Hollywood-based" feature film about women power and how a governor (played by Zsa Zsa) dispensed justice.

Local explanations and words of comfort to Gazini Ganados of Talisay City [Cebu], who failed to land in the Top 10 of the finalists of the 2019 Miss Universe competition Monday (December 9), ranged from stock sympathy to the religious line, with some touch of the ludicrous:

[2] "This is our country's 10th year of putting up strong candidates. The winning streak has to end, or pause, somehow."

[3] "Judges always look for something in the candidate, every crop of judges does. They didn't find it in Gazini."

[4] "She didn't speak as well as many others in the Top 10. Each did an advocacy pitch but the others did it better than Gazini. Not just Filipinas can speak well in English now."

[5] "Sto. Niño didn't favor her winning. Maybe God has some other plan for her."

[7] "Pastor Quiboloy, 'the appointed son of God,' didn't watch the show and had no chance to intervene at the precise moment, which was before the No. 10 finalist's name was read."

The talk, published here last November 25, about Cebu City Councilor Niña Mabatid "prepping for" the 2022 race, drew a reply from the councilor on Facebook. She said she's happy where she is, "serving the people," but she believes in "destiny, see where it will lead us." Translation: she likes what she is now, serving the people as councilor, but she won't resist destiny if it takes her, say, to the House of Representatives.

For destiny to work though, one must be pro-active. It must be part of nudging destiny to take a drug test and announce the "negative" results on social media.

Did you hear Ramil Ayuman and Jun Alcover say the test results are not reliable? She herself decided when to take the test and might have prepared herself for it to get the negative result. Such tests are more reliable when the subject does not know when it is done.