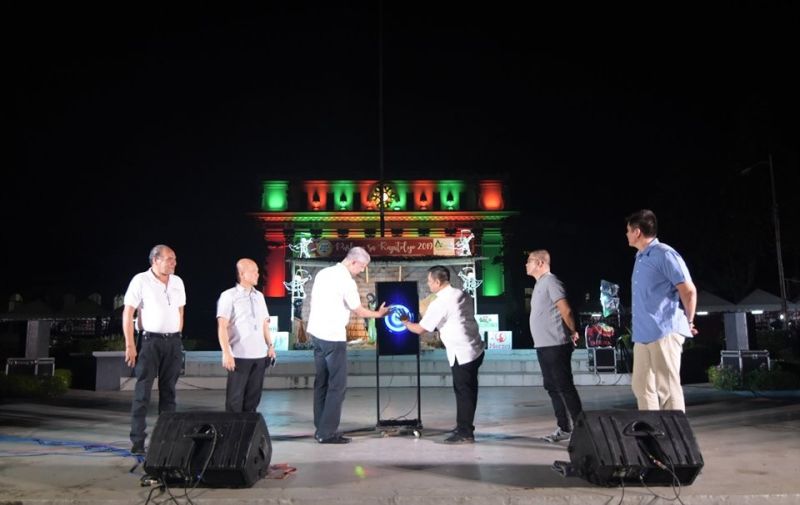 DICT-Western Visayas Officer-In-Charge Regional Director Mar Cunado (third from right) and Governor Eugenio Jose Lacson (third from left) with other provincial government officials during the launching of the Free WiFi for All Program at the Capitol Grounds in Bacolod City yesterday. (Photo courtesy of Richard Malihan)

GOOD news, the Provincial Capitol Building in Bacolod City including the lagoon is now a free Wi-Fi zone.

This after the Department of Communications and Information Technology (DICT) and the Provincial Government of Negros Occidental have launched the Free Wi-Fi for All Program at the Capitol Grounds yesterday.

DICT-Negros Occidental Provincial Officer Romeo Tome, who was present at the launching yesterday, said Capitol employees as well as those going at the lagoon already have 24/7 free Wi-Fi access starting last week.

Tome said WiFi connections can be accessed in four access points such as the lagoon, Sangguniang Panlalawigan, lobby and accounting office.

Another four access points including the Governor’s Office, another one at the lagoon, Mambucal Office and an office at the Capitol compound are up for installation next year.

“The four access points can cater up to 250 simultaneous internet users,” he said, adding that the Capitol, as a free Wi-Fi zone, has 18 to 21 megabits per second speed (mbps) and effective range of 30 to 50 meters.

On October 24, the DICT launched its Free Wi-Fi for All Program at its Negros Occidental Provincial Office in Bacolod City.

This was the second site launched in the province, next to that in San Enrique in September this year.

In 2017, President Rodrigo Duterte signed Republic Act 10929, or the “Free Internet Access in Public Places Act,” mainly aimed at promoting knowledge-building among citizens and enable them to participate in the evolving information and communication age.

From People Connect program, it was changed to Free Wi-Fi for All: Free Public Internet Access program just last July under the new secretary of the agency, former senator Gregorio Honasan.

For the Capitol, the free Wi-Fi is under the first level. This means that the user can avail of 50 megabytes per day without password.

Tome said the project forms part of the agency’s effort to address the digital divide in the province. Not all have access to internet

It enables Negrenses, especially students, do researches and make their reports and assignments when they are at the lagoon, Tome said.

While for those at the provincial government offices, the free WiFi project contributes to the delivery of more and efficient services to the clients, he added.

“As internet connectivity in a place gets better, the economic activities there also increase,” the DICT-Negros Occidental stressed.

The government, through the DICT, has allocated P3 million per year for the free Wi-Fi project at the Capitol.

The Provincial Government, as counterpart, pays the power supply equipment and the electricity bills.