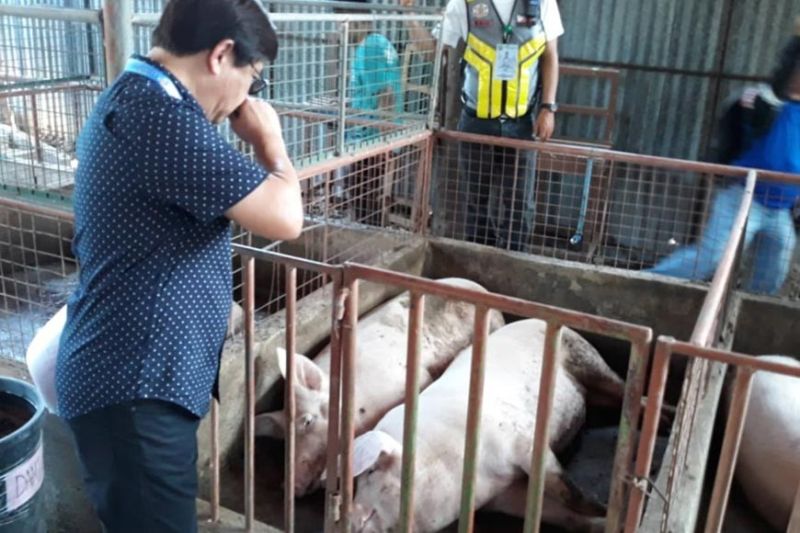 SMELL LIKE HOG filth. Lapu-Lapu City Mayor Junard “Ahong” Chan covers his nose as he inspects a piggery, which emits a foul smell in a residential area in Barangay Pajac on Monday, Dec. 9, 2019. The piggery and a poultry den in Barangay Mactan were ordered closed by the mayor for several violations, including operating without proper permits from the City. (Contributed photo / Lapu-Lapu City PIO)

LAPU-LAPU City Mayor Junard “Ahong” Chan has ordered the closure of a piggery and poultry den in two villages for operating without permits on Monday, Dec. 9, 2019.

The City also discovered that the two business establishments emitted a foul smell, violating Ordinance 484-97, or the Comprehensive Environmental Sanitation Code of Lapu-Lapu City. For operating in residential areas, the poultry den and piggery also violated the City’s Comprehensive Land Use Plan.

Before the business establishments were closed, the City had sent them notices twice last September, ordering them to cease operations for committing several violations.

The poultry den closed by the City was Dolores Egg Poultry in Sitio Ka Maria, Barangay Mactan; it is owned by Ma. Dolores Rivera Osuyos. The owner of the piggery in Barangay Pajac was identified as Henry Sta. Teresa.

Chan said he had received complaints about the piggery and poultry den. His office informed the two business establishments about their violations, but his office was ignored.

The mayor led the closure of the piggery and poultry den with his personnel.

Several residents, including foreigners, near the poultry den fell sick with respiratory-related illnesses due to the stench.

Chan said the city is no longer an agricultural area.

The mayor said he will not give permits to businessmen who would want to operate a piggery or poultry farm in the city. (GCM, RSR)