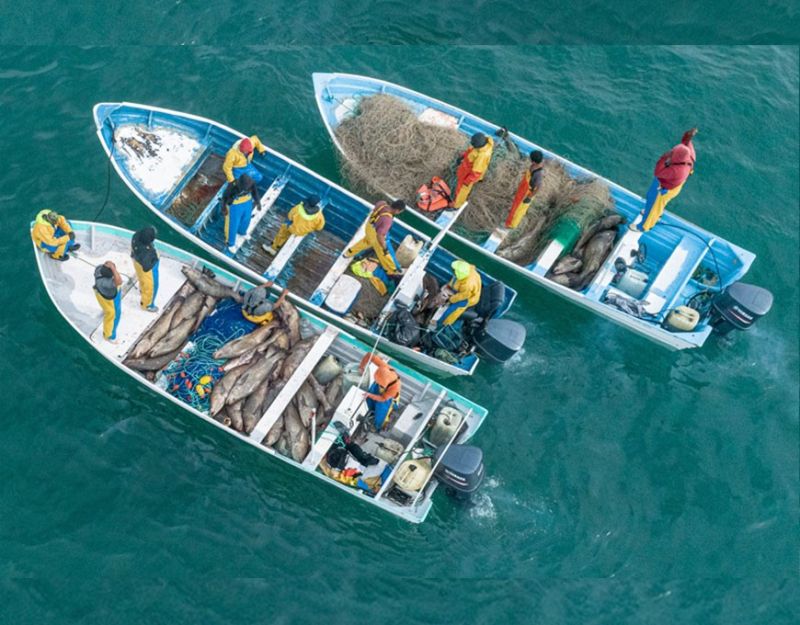 MEXICO. In this Sunday, December 8, photo released by the Sea Shepherd Conservation Society, dozens of endangered totoaba fish are seen captured inside small fishing boats in the Gulf of California, near San Felipe, Mexico. Sea Shepherd operates in the area to remove the illegal gillnets which also trap the world's most endangered marine mammal, the vaquita porpoise, but the group said the mass fishing seen Sunday was a new tactic, in which a number of boats would surround and enclose totoabas to ensure they couldn't escape the nets. (AP)

MEXICO CITY -- A conservation group trying to protect the world's most endangered marine mammal said on Monday, December 9, that hundreds of fishermen massed in dozens of boats to fish illegally in Mexico's Gulf of California.

Activists with the Sea Shepherd group said they witnessed about 80 small fishing boats pulling nets full of endangered totoaba fish from the water near the port of San Felipe on Sunday, December 8.

Those same nets catch vaquita porpoises. Perhaps as few as 10 of the small, elusive porpoises remain in the Gulf of California, which is the only place they live.

While totoaba are more numerous, they are also protected. But their swim bladders are considered a delicacy in China and command high prices.

The Mexican government prohibits net fishing in the gulf, also known as the Sea of Cortez, but budget cuts have meant authorities have stopped compensation payments for fishermen for not fishing.

Sea Shepherd operates in the area to remove the gillnets that trap vaquitas, but the group said the mass fishing seen on Sunday was a new tactic, in which a number of boats would surround and enclose totoabas to ensure they couldn't escape the nets.

The mass turnout overwhelmed the relatively few Mexican navy personnel present, the group said. In the past, fishermen have attacked Sea Shepherd boats as well as naval vessels. (AP)