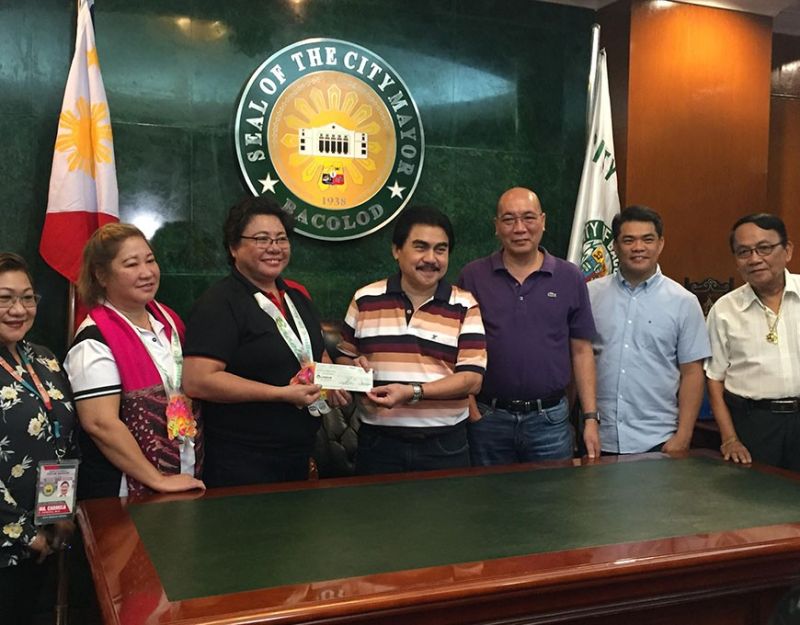 BACOLOD. Dangerous Drugs Board representatives led by Melanie Castillo turn over the check worth P5 million to Mayor Evelio Leonardia, Vice Mayor El Cid Familiaran and other city officials at the Bacolod Government Center on Monday, December 9. (Merlinda A. Pedrosa)

THE Dangerous Drugs Board (DDB) turned over the check worth P5 million to the City Government of Bacolod for the completion of the city's Drug Treatment and Rehabilitation Center project in Barangay Alijis.

Castillo said Bacolod is the only local government unit in Western Visayas with a rehabilitation center from the DDB.

"Bacolod is the first recipient of the DDB for the establishment of a rehabilitation center and we are hopeful that the City Government will operate this soon," she said, adding that "let's spread a drug-free community."

In 2018, the DDB turned over a check worth P10 million to city officials to start the construction of the facility.

The City Government, for its part, also allocated P25 million for the implementation of the project.

DDB chairman Catalino Cuy earlier said the DDB is mandated by Republic Act 9165, otherwise known as the Comprehensive Dangerous Drugs Act of 2002, to extend assistance for the establishment and maintenance of drug treatment and rehabilitation centers in the country.

The rehabilitation center will have an administration building, male and female quarters, a multi-purpose and mess hall building, and pavilion.

It will be constructed with a bed capacity of 52.

The mission of the DDB and Philippine Drug Enforcement Agency (PDEA) is to attain a drug-free Philippines by 2022.

Engineer Loen Rafael Ceballos of the City Engineer's Office said the building's construction is already 75 percent complete though more structures will still be constructed in the area.

Leonardia, for his part, said the local government is very thankful to the DDB for the implementation of the drug rehabilitation project in the city.

"We are thankful to Cuy for prioritizing Bacolod," he said, adding that the city is trying its best to comply and pursue the vision of the administration of President Rodrigo Duterte.

Addressing illegal drug problems should be a top priority, the mayor stressed.