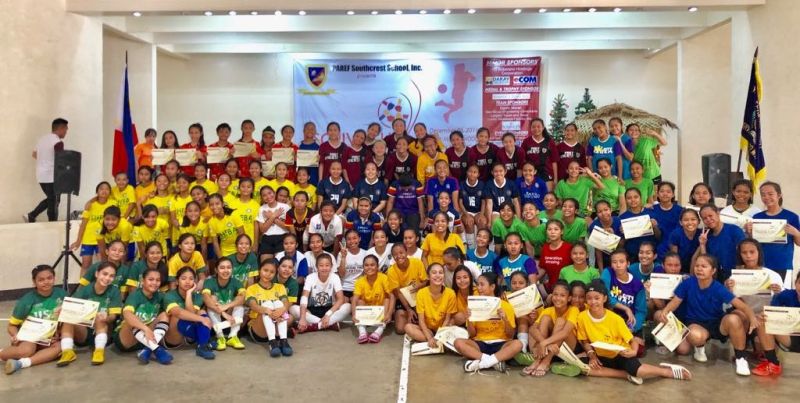 WE PLAY AS ONE. Eighteen teams joined the 5th Paref Southcrest Escriva Cup Fustal tournament over the weekened, which had the Girls 15 and 18 divisions. Among the participants was Sacred Heart School-Ateneo de Cebu, which bagged the top two spots in the Girls 18 a day after setting local football history. (Contributed photo)

THE Sacred Heart School-Ateneo de Cebu posted one of the most lopsided wins in recent local football history after beating the Cebu International School, 28-0, in the Girls 18 division of the Aboitiz Cup on Dec. 7 at the SHS-Ateneo de Cebu field.

The margin is greater than Don Bosco Technological Center’s 27-0 rout of the University of San Jose-Recoletos in the secondary division of the Cebu Schools Athletic Foundation Inc. 2016-2017 season.

Jodi Marie Banzon led the one-sided onslaught with 12 goals to her name, forcing the fourth official to use two lines to tally her goals instead of the usual one. Maegan Alforque, who played for the national U15 team, showed she was still no match for the CIS defense despite playing out of her age group as she tallied 7, including the game’s first goal.

Jin Yoo Kim had a hat trick, while three other players had one each.

The win was so one-sided that on average, the CIS defense gave a goal up every 140 seconds. During a 12-minute span alone from the 33rd to the 45th, Ateneo didn’t let up and scored eight goals despite being already ahead, 13-0, for a 21-0 lead at half time.

What was more impressive is that the team was playing in just their first game under coach Kidd Nicart. During their second stint, the team nailed a 1-2 finish in the Paref Southcrest Escriva Cup, with the Central Visayas Regional Athletic Association bound squad getting the gold.

The USC U18 girls team also tallied a one-sided win, but at a much smaller margin, 8-0, against Sheba FC. Sherlyn Tagalog had three goals, while KC Gonzaga had two in the rout.

In the Boys division, USJ-R Basak and Abellana National School (ANS) posted wins by eight goals. In the Boys 18, USJ-R Basak routed CIS, 10-2, Dustin Ray Ramirez and Louis Adrian Colina completing a hat trick each and Jay Alinsugay scoring two. Angelo Colina and Renz Murillo scored one each, while Seung Hon Shin and Liam Cergneux got one each for CIS.

The CIS Boys 16 team didn’t have much luck as it also lost, 8-0, to ANS. Francis Jay Vercide and Mark Lester Zafra had a hat trick, while Mathew Nacus and Ruben Tampus had one each.

It was a closer contest between DBTC A and Lapu-Lapu United with the Bosconians winning, 4-1, thanks to a hat trick by Joshua Ares and another goal by Francis Artes. Miguel Canoy got the lone goal for Lapu-Lapu. (ML)