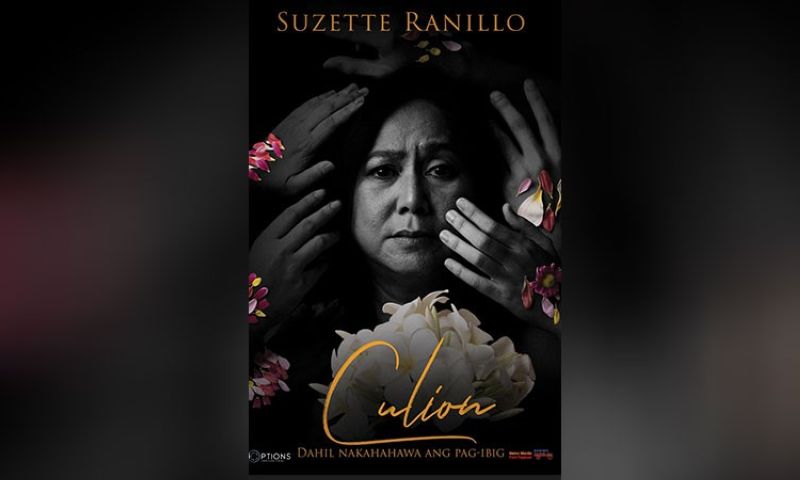 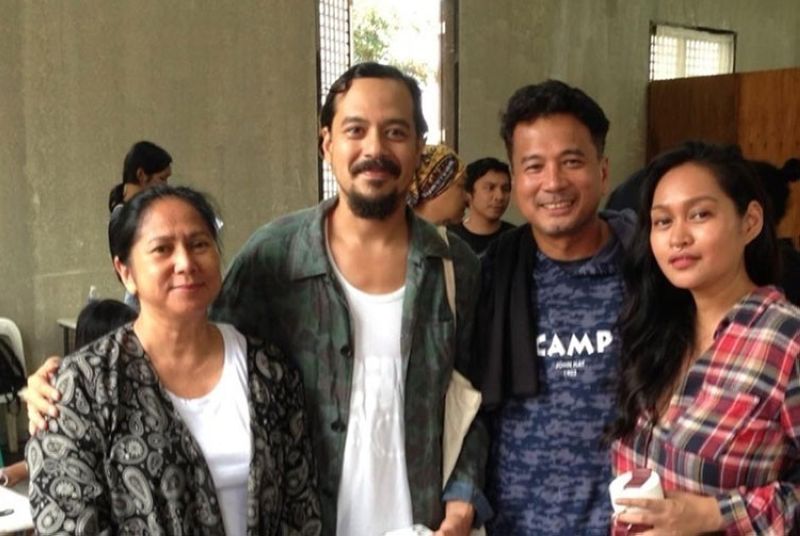 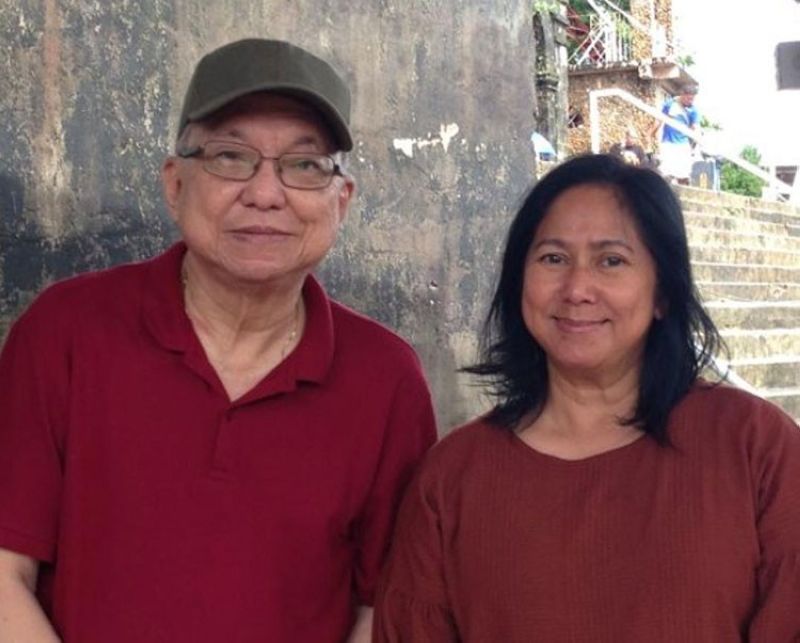 ALTHOUGH she comes from a family of acting royalty, Suzette Ranillo is one of the most underrated actresses working today, appearing in a number of odd roles for years now that failed to show off her caliber of talent, according to formidable scriptwriter Ricky Lee.

But in the upcoming historical period drama “Culion,” which is penned by Lee and one of the eight contenders in the 2019 Metro Manila Film Festival (MMFF), the Cebuana actress gets a break from being underutilized in front of camera.

She gets a challenging -- and extended -- role that showcases her acting chops in the Alvin Yapan-megged motion picture about the untold story of people afflicted with leprosy (now known as Hansen’s disease) and who are left to die at what was once the largest leper colony in the world.

Ranillo portrays Nay Mameng, a sano (leprosy-free) who heads the volunteers steadfastly providing the patients’ medical and even emotional needs at a time when no cure has yet been found for the dreaded disease that becomes a death sentence for those stricken and abandoned on the desolate island in the 1940s.

“When I saw Suzette in ‘Lucia’ with Lolita Rodriguez and Gina Alajar, I was blown away,” Lee revealed to SunStar, referring to the 1992 British Broadcasting Corp.-produced drama, written by the late Lino Brocka and directed by the late Mel Chionglo, about a family moving to the ghettos outside Manila after an oil spill at their fishing village. “I thought ‘she’s brilliant at dapat mas marami itong ginagawang pelikula.’”

Lee said when he learned that the low-key actress is in the cast of “Culion,” he seized the opportunity to give her a meaty part a thespian of high caliber deserves.

“Talagang nilakihan ko ang role,” Lee confessed with a wide grin. “I was just in the first draft of the script when I was told by Alvin and Shandii (producer Shandii Bacolod) that Suzette will step into the role of Nay Mameng. So I told them ‘lakihan na natin ang role, sayang naman dahil kayang-kaya ni Suzette and I really like her.”

Steeled by unfortunate events yet sympathetic to the unbearable suffering of her patients led by three female lead characters -- Anna (Iza Calzado), Doris (Jasmine Curtis-Smith) and Ditas (Meryll Soriano), Ranillo’s versatile range is in full display as Nay Mameng, a role that can make a mark in the awards circuit.

In a moving scene that figures well in the official trailer, Ranillo delivers a heart-wrenching monologue persuading her restless wards to not escape the island and just accept their fate.

Baclod told SunStar that Ranillo is the “first choice” for the demanding part. The two of them worked together in last year’s mind-blowing psychological thriller “Double Twisting Double Back,” which was produced by Bacolod, and where Ranillo plays a psychiatrist to the characters of Tony Labrusca and Joem Bascon. (Bascon won Famas Best Supporting Actor for the film.)

“Suzette is one of the main support cast in ‘Culion’ and her role is pivotal,” said Bacolod, who called Ranillo a “naturally-gifted” actress. “Her Nay Mameng affects everyone in the film. Malaki ang kinalaman niya sa characters nila Iza, Jasmine and Meryll. Direk Alvin is really impressed with her talent.”

Bacolod also made sure Ranillo gets proper billing befitting a veteran artist who has been in the game since the 70s and even became the toast of the Philippine cinema after winning a FAMAS at age 14.

Ranillo (then known by screen name Nadia Veloso) and her famous mom, Gloria Sevilla, made history in 1974 with a mother-daughter back-to-back win as Famas Best Actress and Best Supporting Actress for the critically-acclaimed Visayan tearjerker “Gimingaw Ako.” It was helmed by the late actor/director Amado Cortez, Ranillo’s stepfather and Sevilla’s second husband. (Ranillo’s biological father, actor and lawyer Mat Ranillo Jr. died in a plane crash.)

It made Ranillo a bona fide star and allowed her to work steadily on TV (Ang Biyenan Kong Mangkukulam, Mommy Ko Si Mayor, Balintataw) and big screen (Asyong Aksaya, Matud Nila, Kumander Alibasbas, Taga sa Panahon). She also dabbled in stage plays, essaying various lead and support roles including Sisa -- which she played for over 80 times -- in Metropolitan Theatre, Folk Arts Theatre, and Cultural Center of the Philippines, among other noted venues.

And with her famous parents and siblings (Mat Ranillo III, Lilibeth Ranillo and Dandin Ranillo), she was part of one of the most celebrated showbiz clans in the 70s and 80s.

Already a hot property, Ranillo starred with two other “it girls” of that era, Lorna Tolentino and Amy Austria, in the 1979 Ishmael Bernal acclaimed sexy drama “Aliw.” For portraying a prostitute, who is also an unwed mother and a mistress, she received a Gawad Urian best supporting actress nod.

She later shared top billing with Rudy Fernandez and Vivian Velez in the 1981 action-drama “Kahit Ako’y Lupa,” her last project before immigrating to California with the whole family.

Ranillo adjusted well in the American life. She landed a lucrative career at the Silicon Valley and worked for several years as territory manager for a computer firm just when computer technology was gaining popularity in the 80s. She handled huge accounts and traveled around the US. When President Corazon Aquino was swept into power in 1986, her stepdad, Amado Cortez, was named Philippine consul (and later consul general with a rank of ambassador) in San Francisco. (Cortez, who was born Arsenio Padilla and died in 2003, was directly related to the clan of Robin Padilla.)

‘She’s there for me’

Currently, Ranillo earnestly manages her mother’s daily schedule and healthcare needs. Gloria Sevilla, regarded as Queen of Visayan Movies, still acts in front of the camera and works regularly evaluating films and TV shows, among other things, as a board member of the Movie and Television Review and Classification Board (MTRCB).

"As a daughter, she’s always there for me," Sevilla continued. "We may have differences just like other mothers and daughters, but at the end of the day she’s there for me. She meant the world to me."

She recently acted in and directed the heavy drama “Pagbalik” (also starring her mom), which was an official entry to the 2019 Pista ng Pelikulang Pilipino. It’s her second directorial job after Care Home in 2006, with Nora Aunor and Sevilla in the lead.

Ranillo and her mom are currently in San Francisco for the screening of “Pagbalik,” to accept a lifetime achievement award for Sevilla from the San Francisco Filipino Cultural Center, and to spend some quality time with the Ranillo and Padilla clan in the West Coast.

The mother and daughter will be back in Manila this week in time for the promotion of “Culion,” produced by iOptions Ventures Corp. under Peter and Gillie Sing. The traditional MMFF parade of stars is set on December 22 in Taguig City, with the actual two-week festival kicking off on December 25.