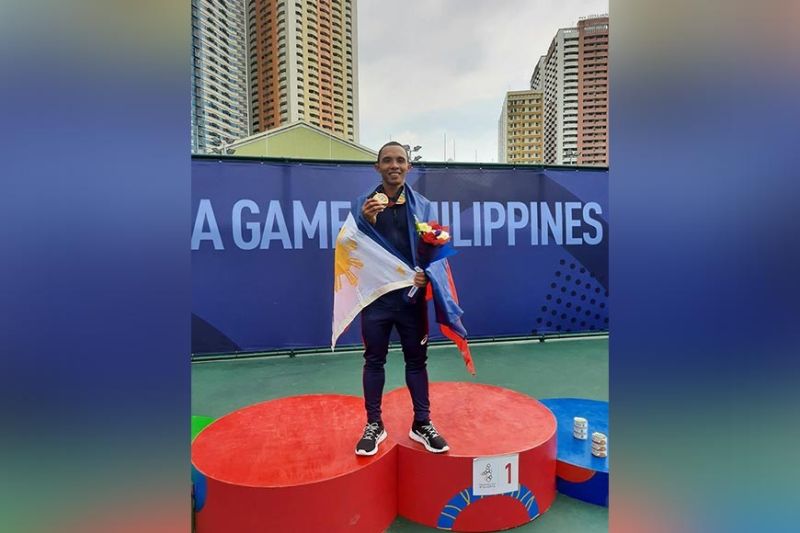 The 32-year-old Philippine Army Private First Class said, "Down mi 0-4 agad pero humabol kami naging 3-4 kaso kinapos na (We were down by four at the start but we managed to trim the lead 3-4 only to lose steam at the stretch)."

Good enough that Joseph Arcilla of Butuan City defeated Kawin Yannarit, 4-1, in their first singles clash to level the match at 1-all.

Tapos kami tanan over-all sa babae og lalake (We're very happy because this is historic for the Philippine soft tennis to win Seag gold and we are the overall champions in both men and women)," said the netter who used to be a pulot (ball) boy at Sandawa and Ecoland tennis courts at age 11. For six years, since then, he juggled going to school, tennis training and doing side job as ball boy.

After winning his Seag gold, Alcoseba wants to to share his talent to youngsters who also dream of playing in the SEA Games. He also dreams of competing in the Olympics, saying, "Masaya sa feeling man gud pagdala nimo bandera ng Pilipinas."

He dedicates his gold to his wife Dianalyn and sons Xian Anthony, seven, and Sean Gabriel, five.

Alcoseba, who joined the national soft tennis team two years ago and helped the country win a team bronze in the Korea Cup 2017, a team silver in the 1st Southeast Asian Soft Tennis Championship 2017 and a team gold in Southeast Asian Soft Tennis Championship 2018, also thanked Col. Jeff Tamayo, soft tennis president, their coaches, Philippine Army and his family for their support.

The Philippine Sports Commission (PSC) funded their training and exposures abroad to beef up their preparations for the biennial meet.

It can be recalled that Alcoseba bagged a doubles silver medal for Davao Region in the 2005 Palarong Pambansa while he was studying at Rizal Memorial Colleges. He also collected team gold medals for Davao in the National Prisaa Games (NPG) 2006 in Lingayen, Pangasinan and in Iloilo City in 2007 and doubles gold in Zamboanga 2008. He at last clinched a singles gold in the 2011 NPG in Zamboanga while he was a varsity scholar at Jose Maria College then at Brokenshire College.