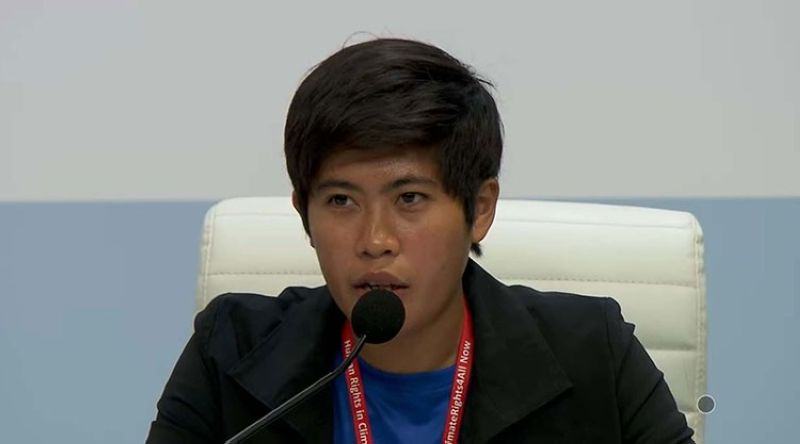 Act now. This was the request of a 23-year-old Cebuana climate activist to the local leaders of Cebu to address the problem on climate change.

Muaña was the only youth leader from the Philippines who joined the United Nations (UN) Climate Conference, or the Conference of Parties (COP25), in Madrid, Spain.

"To the local government(s) in Cebu: I am here. I am willing to help you and coordinate with you for the implementation of climate actions," said Muaña in an interview with Superbalita Cebu.

She wants to see leaders to take necessary steps to fight the climate problem, which several scientists said could threaten the existence of humanity and the planet.

Muaña was one of the seven-member panel, which included celebrity climate activist Greta Thunberg, during the COP25 press conference on Monday, December 9, 2019.

She joined other youth climate champions from various parts of the world -- Angela Valenzuela of Chile; Arshak Makichyan of Russia; Carlin Zackras of the Marshall Islands, Nakabuye Hilda Flavia of Uganda; and Rose Whipple of Dakota, USA.

In her speech, Muaña talked about the Philippines's actions in dealing with the world's rising temperature, which also raises the sea levels.

"The Philippines has been making legislative measures in response to climate change which is a really good foundation. However, real time, robust and lasting action is needed," Muaña said.

She also called out global leaders to act before it's too late.

"This is supposed to be a blue COP. Walk the talk and make it blue as possible. Every second is a time for action and we are here because we want action," Muaña said.

The 2019 UN Climate Conference brings together governments, businesses, local authorities and civil society in Madrid to express support for the Paris Agreement and for urgent climate action, according to the European Commission (EC).

Presided by the Chilean government, the COP25 started last December 2. It will end on Friday, December 13. It got the name of COP25 as it is the 25th Conference of the Parties to the United Nations Framework Convention on Climate Change (UNFCCC).

The COP25 is labeled as Blue COP, giving emphasis the close links between the climate and ocean's health.

The Paris Agreement, adopted in December 2015, sets out a global action plan to put the world on track to avoid dangerous climate change by limiting global warming to well below 2°C above pre-industrial levels and pursuing efforts to limit the temperature rise to 1.5°C. It entered into force on 4 November 2016. 195 UNFCCC Parties have signed the Agreement and 187 have now ratified it, the EC reported.

Muaña said she felt happy to represent the country in a big event as she was able to voice out her views.

"It feels different to hear me in COP25. But in my own country, there is a little support. I am happy about COP because it allows the youth's voices be heard," she said.

Muaña was interviewed by the international press and served as a panelist in other conference events.

She is also serves as coordinator of the Youth Strike for Climate Philippines, which is connected to Thunberg's group.