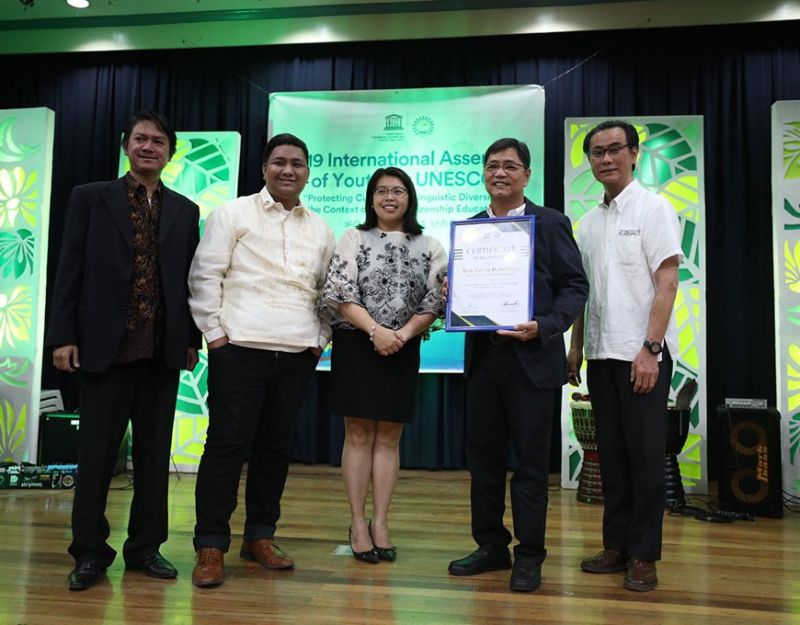 PAMPANGA. City of San Fernando Mayor Edwin Santiago receives the recognition as "2019 Unesco Club Outstanding Mayor for Good Governance" conferred by the National Coordinating Body of Unesco Clubs in the Philippines Inc. during the 2019 International Assembly of Youth for UNESCO at the University of the Assumption on December 7. (Contributed photo)

The award was given by the National Coordinating Body of Unesco Clubs in the Philippines (NCBUCP) Inc. during the 2019 International Assembly of Youth for Unesco at the University of the Assumption on December 7.

NCBUCP is a national, non-stock, non-profit, non-sectarian association of all accredited Unesco clubs in the Philippines. It aims to become a key player in mobilizing support for Unesco's ideals and mission at the grassroots level with different stakeholders in Philippine society.

In his speech, Santiago expressed his gratitude and said the award was the result of the synergy of the City Council, partners, as well as department heads, stakeholders and the people of San Fernando. This synergy, he added, put the city in the map of development and progress.

"For this award, thank you to the Coordinating Body of Unesco Clubs in the Philippines to which I have the utmost respect, regard, and admiration. With all the recognition the city is getting, I cannot help but be grateful to God, to our partners, private and non-private sectors, to my colleagues and every Fernandino contributing to our success," he said.

The mayor also championed the commitment of the local government to public service, thus elevating the culture of excellence.

"The city has been very consistent on its commitment; commitment to people and service. That is why we are called public servants. And when I say public servants, we just don't do things. We do things with excellence. True to our vision of being a model of countryside development," Santiago said.

Santiago said this has made the local government more driven to continue its efforts toward becoming a smart, green, livable and sustainable San Fernando. (PR)