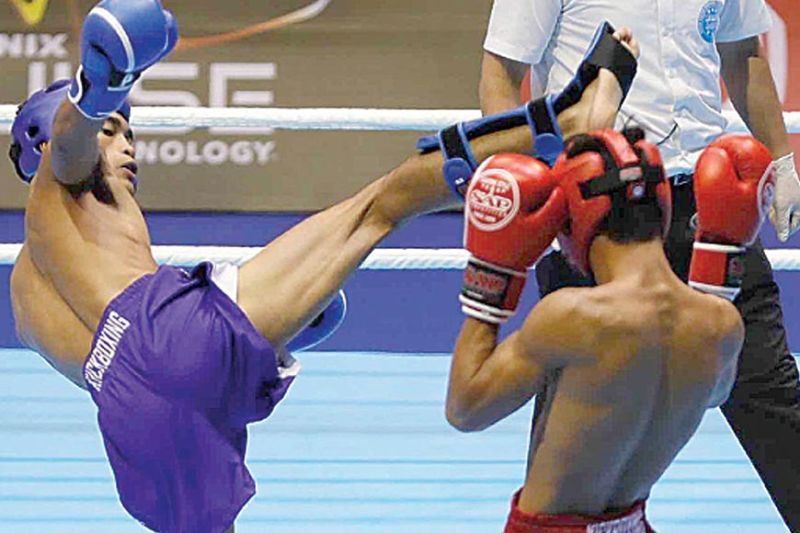 CORDILLERA PRIDE. Jomar Balangui (in blue) connects against Khem Chann of Cambodia during their bout in kickboxing of the 30th Southeast Asian Games. (Phisgoc photo)

JERRY Olsim’s conquest in the kickboxing event while wrestler Jason Baucas who secured the top mint in the 30th Southeast Asian (SEA) Games gave Cordillera region its 28th medal in the biennial meet as the country is on course of becoming the overall champion anew.

Olsim, who is also a professional mixed martial arts fighter from the famed Team Lakay, bagged the gold medal in the 69kg kick light event edging Thailand’s Srayut Klinming at the Cuneta Astrodome in Pasay.

Baucas, just like Olsim who are both from Benguet Province, also grabbed the gold medal defeating Vietnam’s Hong Phuc Duong in the men's Greco-Roman 72kg.

Also bagging a medal in wrestling is Ifugao pride Jason Balabal who copped the silver medal in Greco – Roman 87kg.

In boxing, University of Baguio’s Nesthy Petecio took home the gold in the 57-kg class (featherweight) against Nwe Ni Oo of Myanmar at the PICC Forum.

Kickboxers Renalyn Dacquel of Abra and Jomar Balangui who hails from Kalinga meanwhile snatched a silver each.

As of Tuesday, Gina Iniong and Jean Claude Saclag are still battling for gold medal in kickboxing.

Stephanie Sabalo kicked off Cordillera’s medal haul after copping two gold medals and one silver in the dancesport competition.