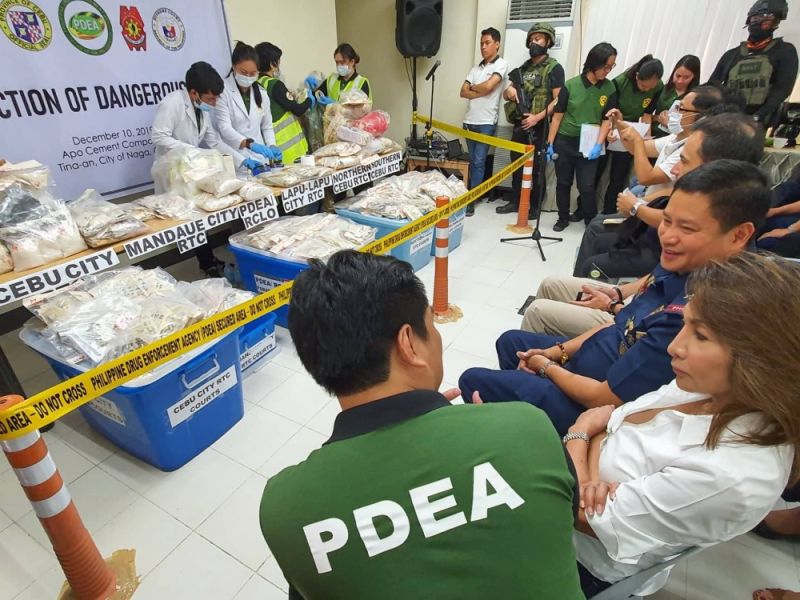 A TOTAL of P194 million worth of confiscated illegal drugs went up in smoke on Tuesday, Dec. 10, 2019 at the Apo Cement Corp. (Apocemco) plant in the City of Naga, northern Cebu, following orders from several courts across the province to destroy the drugs that were no longer needed to prosecute cases.

Loads of shabu, marijuana, and cocaine that were kept in Regional Trial Court (RTC), Philippine National Police (PNP) and Philippine Drug Enforcement Agency (PDEA) storage facilities were destroyed years after their confiscation between the period 1994 to 2019 with some in storage for close to 25 years.

The drug cases had been pending before 40 courts in Cebu.

RTC 7 Executive Judge Macaundas Hadjirasul said there are still confiscated illegal drugs not covered by court orders to destroy them, but as soon as the courts handling these cases issue the order, authorities will immediately act on it.

Hadjirasul hoped that they could proceed to destroy other confiscated drugs next month to ease public fears that evidence under the custody of the police and courts were being tampered with.

“At least this puts some kind of an end to speculations that evidence in court might have been tampered with. The PDEA had inspected them, inventoried them, tested them again, and it is still intact,” Hadjirasul assured.

He believed that dangerous drugs reported to have been recycled by so-called “ninja cops” might have been from items seized without a case filed in court or drugs that were still subject for filing as evidence.

The illegal drugs were seized from government operations in Metro Cebu and Cebu Province.

They were destroyed at the cement factory through a process called thermal decompostion.

Apocemco plant director Gery Rota explained that the thermal decomposition was done in a coal processing facility which is also used by Apocemco to process alternative fluid from garbage collected in the City of Naga and other nearby areas.

In just a millisecond, the burned items would disappear with no ashes or residues, Rota added.

Majority of the destroyed drugs were taken from the PNP crime laboratory and RTC. PDEA contributed only 400 grams to the illegal substances incinerated at the plant.

“We still have 90 percent of the seized drugs in the storage. Most of them don’t have a court order,” said PDEA 7 chief director Wardley Getalla.

These include 35 kilos of shabu left in their storage facility with a Dangerous Drugs Board (DDB) value of P238 million.

Brig. Gen. Valeriano de Leon, chief of Police Regional Office 7, said even with Tuesday’s burning, there are still 120 kilos of shabu left in the custody of the PNP crime laboratory in Central Visayas with a DDB value of P816 million.

The drugs which were ordered destroyed either had no use as evidence since no case was filed against the suspect who may have died during the police operation; or were part of a bigger bulk of prohibited drugs with smaller samples left at the court for use as evidence.

To ensure that the items subjected to destruction were indeed dangerous drugs, a PDEA chemist conducted a “presumptive analysis” through a color test where random samples were placed in test tubes and mixed with certain chemicals.

Getalla said the PDEA may still partner with Apocemco to conduct a regular destruction of its seized drugs. But PDEA, he said, is looking forward to having its own facility soon.

Tuesday’s operation was Apocemco’s second time to open up its facility for drugs destruction. The first time was in 2004 when illegal drugs from the Mandaue City police crime laboratory were burned in their plant. (KFD, AYB)