Arctic habitats and cultures on thin ice as region warms 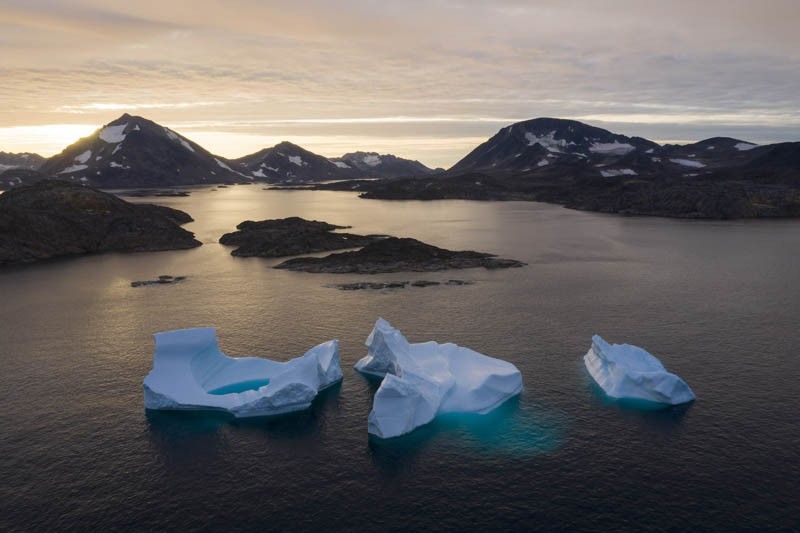 FILE - In this Aug. 16, 2019, file photo, large icebergs float away as the sun rises near Kulusuk, Greenland. Rising temperatures and diminished snow and ice cover in the Arctic are imperiling ecosystems, fisheries and local cultures, according to a report issued Tuesday, Dec. 10 by the National Oceanic and Atmospheric Administration. (AP Photo/Felipe Dana, File)

WASHINGTON -- Rising temperatures and shrinking snow and ice cover in the Arctic are endangering habitats, fisheries and local cultures, according to a report issued on Tuesday, December 10, by the National Oceanic and Atmospheric Administration.

“A lot of people think of the Arctic as being a faraway place, but the loss of ice is affecting people now -- it’s changing peoples’ lives,” said Don Perovich, a Dartmouth College geophysicist who contributed to the report.

“It isn’t just a bunch of cold statistics,” Perovich said.

The Bering Sea, which lies between Alaska and Russia, is one of the world’s two most productive fisheries. But the Arctic region is warming more than twice as fast as the rest of the planet, the report found.

The past two years saw record low levels of sea ice -- frozen seawater -- floating on the Bering Sea during winter, the report found. And the habitats of fish on which commercial fisheries and indigenous groups depend have shifted northward, according to the report released at the annual meeting of the American Geophysical Union.

“Fishing industries are built around the assumption that fish will be in a certain place at a certain time, but that’s changing in response to a rapidly changing Arctic,” said Waleed Abdalati, an environmental scientist at the University of Colorado-Boulder who was not part of the report.

For the first time, the U.S. agency's annual “Arctic Report Card” includes observations from indigenous groups who hunt and fish in the region.

“We look for the return of the sea ice every fall season,” wrote 10 representatives of the region's more than 70 indigenous communities. “The ice provides access to seals, whales, walrus, fish, crabs and other marine life for our subsistence harvests.”

The communities once saw the ice in the northern Bering Sea during eight months of the year, but now they only see it for three or four months, the report found.

Meanwhile, a new scientific paper published on Tuesday in the journal Nature found that the melting of Greenland's ice sheet has accelerated. The melting is now seven times faster than in the 1990s.

Less ice means feeding disruptions for many Arctic species. Polar bears stalk their prey, including seals, on ice. Ivory gulls scavenge on ice for scraps of those hunts, as well as for small fish and other creatures.

“Birds are migrating to the Arctic and not finding the food they need,” said Matthew Druckenmiller, a scientist at the University of Colorado Boulder's National Snow and Ice Data Center and one of the NOAA report editors.

“They are showing up with empty stomachs on the beaches. The indigenous communities are reporting seeing seabirds dead on beaches in numbers they haven’t seen before,” Druckenmiller said.

Arctic Canada's breeding population of ivory gulls has declined 70 percent since the 1980s, the report found. This is likely due to loss of sea ice as well contamination in the food chain.

“The ivory gull in the Arctic is like the canary in the coal mine,” said Abdalati. “It’s really incumbent on us to understand why these changes are happening, and what can be done.”