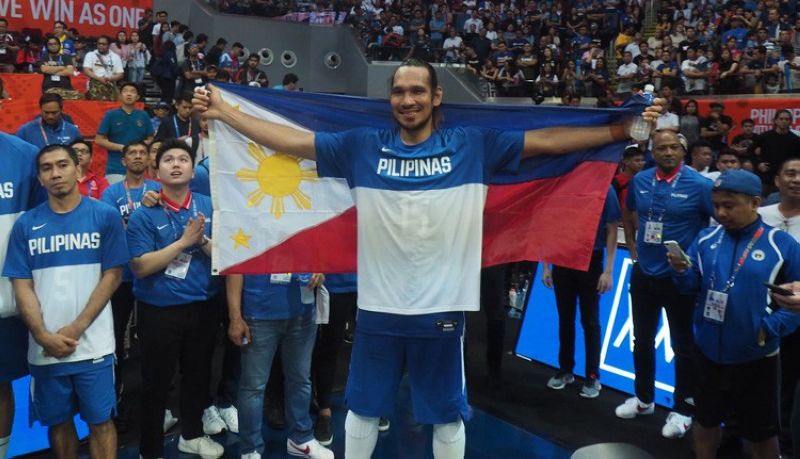 June Mar Fajardo raises the Philippine flag after leading the men’s basketball to a gold medal finish at the Mall of Asia Arena. Fajardo and Greg Slaughter were the last Cebuano athletes to win a gold medal in the 30th Southeast Asian (SEA) Games. (SunStar foto/ Richiel S. Chavez)

CEBU’s athletes came up with a performance to remember and helped the Philippines accomplish its mission — to win the overall championship — in the 30th Southeast Asian (SEA) Games.

Cebuanos and athletes with roots from the Queen City of the South racked up a total of 19 gold medals, 17 silvers and 22 bronzes as Team Philippines closed out the 11-nation sporting conclave in historic fashion with 149 gold medals, 117 silvers and 119 bronzes on Wednesday, December 11, 2019.

Former University of Cebu stalwart and five-time MVP Fajardo scored 17 points and added 13 boards to lead Team Philippines to its 18th men’s basketball title before the 12,462 paying fans in Mall of Asia Arena.

“This is a special win for the team. For me it’s also memorable since it’s my first SEA Games gold medal,” the Pinamungajan, Cebu native said after the game.

In the first day of competition, the duo of Wilbert Aunzo and Pearl Marie Cañeda sparked Cebu’s medal surge coming up with three gold medals in the debutant dancesports competition at the Royce Hotel in Clark, Pampanga.

James Deiparine, who ended the country’s 10-year gold medal drought in swimming after winning a gold medal in the men’s 100-meter breaststroke, also traces his roots from Cebu.

The same can be said of Ohio-based pole vault gold medalist Natalie Uy, whose father was from Cebu.

In the group event, Adroit bagged a gold medal in Dota II event of eSports, Metudio Suico and Jean Marie Sucalit were part of the sepak takraw gold medal team and Cebuano battlers in the Philippines baseball team.

The athletes’ hard work will be rewarded with incentives from both national and local government.

Vietnam finished second overall with a gold- silver-bronze tally of 98-85-104 and Thailand occupied the third spot with 92-103-123 harvest.

This was the second overall championship for the Philippines following the 2005 triumph.

“We were all hoping and praying for this, but it is still a sweet surprise now that it’s actually happening. I am so proud of our athletes.