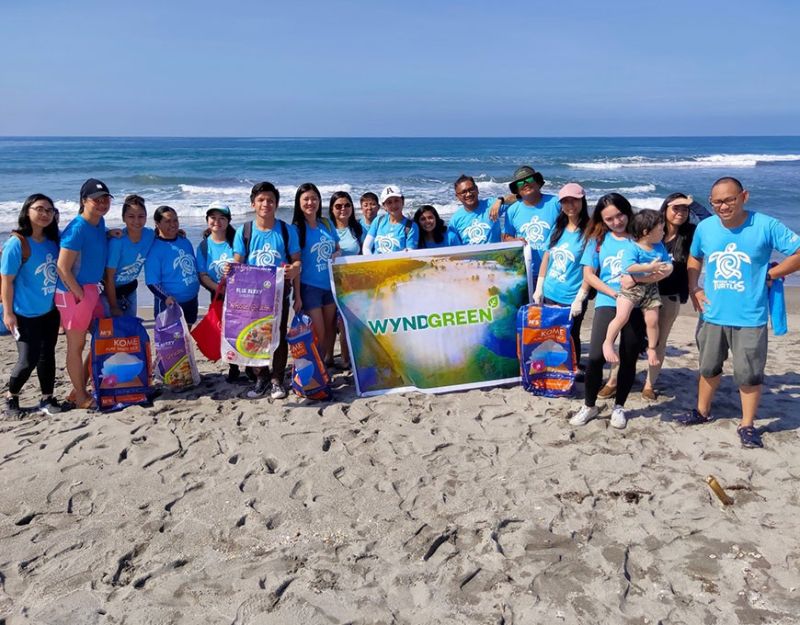 PAMPANGA. A team from the Wyndham Destinations service center in Clark, Pampanga gathered in Morong, Bataan over the weekend to join a local conservation centre safely release sea turtles into their natural habitat. (Contributed photo)

CLARK FREEPORT -- A team from the Wyndham Destinations service center in Clark, Pampanga gathered in Morong, Bataan, over the weekend to join a local conservation center to safely release sea turtles into their natural habitat.

Olive ridley turtle hatchlings at the Pawikan Conservation Center were released at Nagbalayong Beach after they hatched under the sand and scrambled from their nests last Saturday morning, December 7.

The center sits on the coast of Morong and is known as a nesting site for three out of the five species of marine turtles found in the Philippines, namely: the hawksbill sea turtle, olive ridley sea turtle, and green sea turtle.

To further support the center's efforts, the Clark team raised P10,000 through a workplace fundraising activity for the center's program that protects sea turtle eggs and rehabilitates injured marine turtles.

Jerry Estrada, Wyndham Destinations service center director of operations, said the activity was one of the team's biggest environmental initiatives of 2019.

"We are proud of our staff, who organized their own fundraising campaign and approached their family and friends, in order to raise awareness and much-needed funds to protect these beautiful creatures," Estrada said.

He said sea turtles are important in the Philippine ecosystem and stressed the need to preserve them.

Estrada also noted that sea turtles are faced with challenges not just from their natural predators, but also from climate change and plastic pollution, among others.

"We would encourage businesses, local communities and the younger generation to join us in supporting the Pawikan Conservation Centre to build safer and secure nesting areas free from rubbish and away from predators," he said.

Staff earlier participated in a briefing on the importance of sea turtles to the ecosystem and the simple practices they can adopt to keep beaches clean.

They also took part in a beach clean-up activity, with the aim of minimizing waste on Nagbalayong Beach and scattered rubbish on nearby huts.

Wyndham Destinations has also rolled out numerous sustainability initiatives such as eliminating the use of plastic straws in an effort to reduce consumption of single-use plastic through its global WYNDGreen program. (PR)