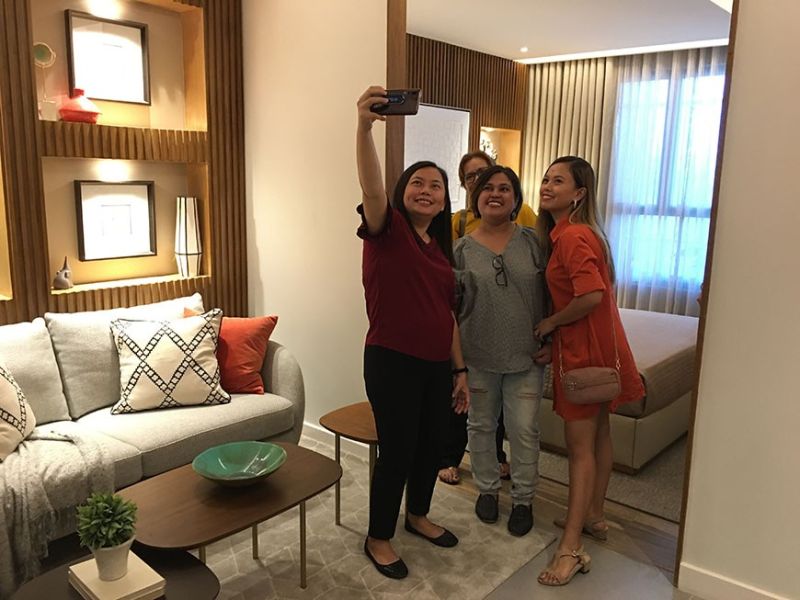 Bloggers take a groufie inside one of the model units of The Paragon Davao in its newly-opened showroom at the Sutherland Compound in Quirino Avenue on Wednesday, December 11. (Photo by Roberto A. Gumba Jr.)

CEBU-BASED developer Cebu Landmasters, Inc. (CLI) will have a total investment of P10 billion in Davao City for next year.

In a press conference during the blessing of the Paragon Davao Showroom, Wednesday, CLI executive vice president Jose Franco Soberano said four joint projects with Yhes Inc. are being developed in the city.

These are Phase 1 of the Davao Global Township (DGT), Phase 2 of The Paragon Davao, the Lyceum Casa Mira Tower, and the Magtuod housing project.

Soberano said the 22-hectare DGT which will be located in Matina will house retail strips, parks, a museum, a residential tower, and an office tower.

“Land development is actually in full swing so by the second half of next year you will see four new road accesses which will help the traffic situation. You can connect from Quimpo to McArthur through a new six-lane road,” he said.

Meanwhile, Phase 2 of the P2.6-billion mixed-use development The Paragon Davao will also be launched in March next year.

“Paragon construction is in full swing. We are doing the foundation works right now and still targets to complete in 2022,” he said.

Soberano also said they will also start the development of two Lyceum of the Philippines-Casa Mira condominium towers by the second quarter of next year located in Buhangin, Davao City.

He added that they have acquired a 28-hectare property in Magtuod in Barangay Ma-a to turn into a subdivision. It will be their first horizontal project in Davao City.

Soberano also announced that the first project of CLI and Yhes, Inc., Mesatierra Garden Residences, has been topped off and set to be completed around the third quarter of next year.

“Davao is our second biggest market outside Cebu. So it is like our second home. There are a lot of opportunities here, a lot of demand and we feel very close to Davao,” he said.