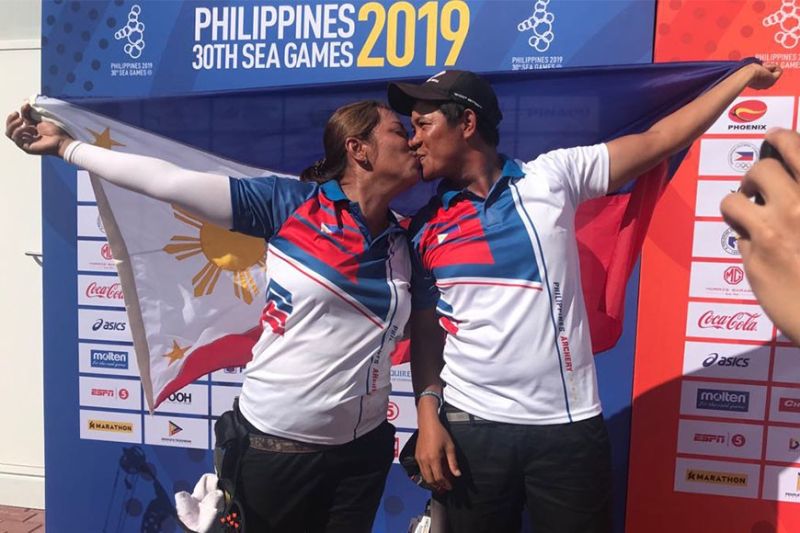 TARLAC. Husband and wife Rachelle Anne and Paul Marton Dela Cruz, who represent the country for the compound mixed team category, seal their victory with a kiss after hauling another gold for the Philippines in the archery competition of the Southeast Asian (SEA) Games held at the Clark Parade Grounds. The couple bested Vietnam's team with a score of 148-147. (CDC-CommDep)

CAPAS, Tarlac -- After 14 years, the Philippine team was the overall champion in the recently concluded Southeast Asian Games 2019.

The last time the country ruled the SEA Games was when it hosted the biennial games in 2005.

Filipino surfer Roel Casugay also received a Fair Play recognition for displaying extraordinary concern to a fellow in the midst of competition.

Casugay saved his Indonesian competitor from drowning who got swept away by waves in the midst of the competition.

During the closing ceremonies, the Philippine team also passed on the SEA Games flag to Vietnam sports executives as they will be the host of the next games in 2021.

Thousands of spectators witnessed the closing rites which was highlighted by the switching off of the cauldron.

Foreign and local guests, including athletes and volunteers, were treated to a night of spectacle, including a drone show, grand fireworks display, and mini concerts by international stars Arnel Pineda and the Black Eyed Peas.

Pineda and Black Eyed Peas member Apl.de.ap are both Filipinos.