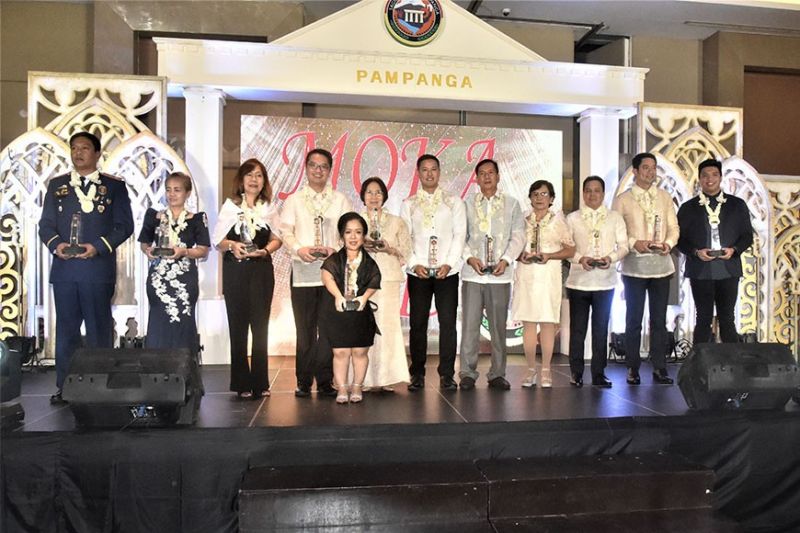 PAMPANGA. The Moka 2019 awardees gather at Royce Hotel and Casino to receive their trophies that symbolize the celebration of their exemplary contributions to the Kapampangan race. (Contributed photo)

The awarding was the main event of the celebration of the 448th founding anniversary of Pampanga dubbed as the "Aldo ning Kapampangan."

Governor Dennis Pineda, in his message, said, "Your personal excellence in your respective fields tells a lot about the community that we have: a community of talented, well-driven, and honorable individuals."

Vice Governor Lilia Pineda, Moka committee chairperson, said the annual conferment of the award is valuable to the Provincial Government because it recognizes exemplary Kapampangans who excel in their respective fields of endeavor and contribute to the welfare and reputation of the Kapampangan race.

Governor Pineda led the conferment of the "Ing Tala ning Kabiasnan at Kayapan ning Kapampangan" trophy to the 2019 Moka awardees.

Archbishop Emeritus Paciano Aniceto also graced the event as the guest of honor.

The selection and evaluation of this year's Moka awardees were conducted a week before the ceremony at the Aquino Hall, Capitol Compound here.

The Moka has been the major highlight of the Aldo ning Kapampangan since its inception in 1978 under the initiative of then Governor Juanita Nepomuceno. It is perceived as the pinnacle of all awards conferred by the Province of Pampanga to its outstanding sons and daughters.

Today, more than 400 outstanding Kapampangans from different fields have been chosen and honored with the famed award. (PR)