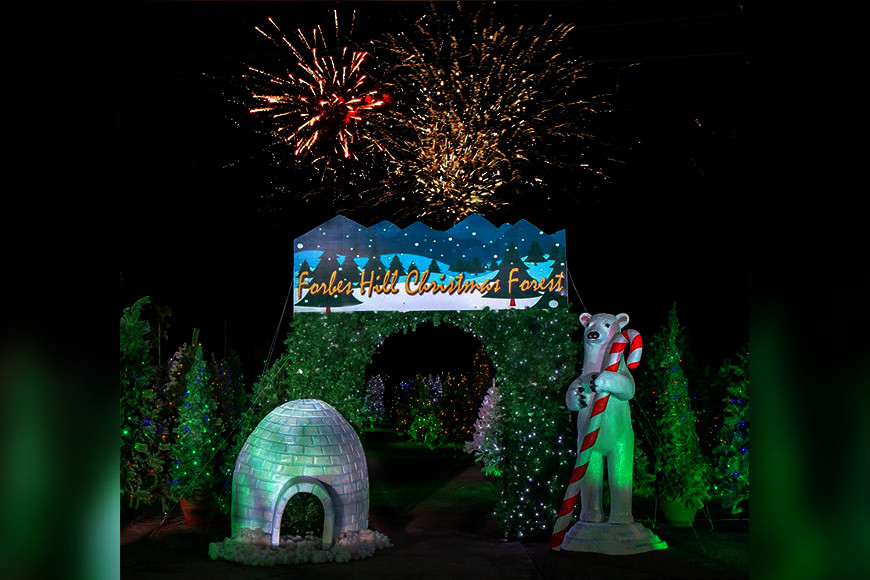 A NEWLY-UNVEILED Christmas attraction awaits Bacoleños and Negrenses, giving them more reasons to spend the holiday season in the province.

Property giant Megaworld Corporation has lighted up and opened its “Forbes Hill Christmas Forest,” which is poised as the country’s largest Christmas tree park.

Around 250 Christmas trees of varying sizes and colors are now spread all over the main road of Forbes Hill, Megaworld’s premier residential village development situated along Bacolod-Silay Airport Access Road bordering the cities of Bacolod and Talisay.

The attraction features Christmas trees adorned with thousands of dazzling colored lights that come alive at night and dance to the tune of Christmas jingles.

Megaworld - Bacolod vice president for sales and marketing Jennifer Palmares-Fong, who spoke at the switch on ceremony on Wednesday night, said this is the first time for the Negros Occidental capital city to have a park filled with hundreds of Christmas trees.

Palmares-Fong said they are very glad to introduce such attraction as their way of celebrating Christmas in Megaworld.

“While others are into putting up giant Christmas trees and dancing lights, we thought of introducing something unique and different here at Forbes Hill,” she said.

Palmares-Fong furthered “we would like to invite everyone to come and visit us here at the Forbes Hill Christmas Forest and enjoy the fun and joyful vibe of the season by bringing along their families and friends.”

The Christmas tree park, which is open to the public until January 5 from 6 a.m. to 12 midnight, is located right beside the iconic Bacolod Welcome Marker.

The structure is the Philippines’ first Las Vegas-inspired welcome marker that Megaworld and the City Government of Bacolod inaugurated last year.

The company said the Christmas trees light up in a brilliant display of colors every night.

Visitors who are either coming from the airport or the city proper can drop by the park, walk around, take as much photos and videos as they want, and feel the Christmas mood as if they are in another country surrounded by hundreds of pine trees, it added.

Meanwhile, the 15-hectare Forbes Hill is the first upscale village inside the Northill Gateway, one of Megaworld’s two townships in the city.

It is 20-minute away from the downtown area of Bacolod City and only around 10 minutes from the New Government Center passing through circumferential road.

Also rising at the eastern district of the city is its second township in the city, the 34-hectare The Upper East.

The development is the city’s first masterplanned mixed-use community that will also host Bacolod’s new and modern central business district.