Palma to public: Open your hearts 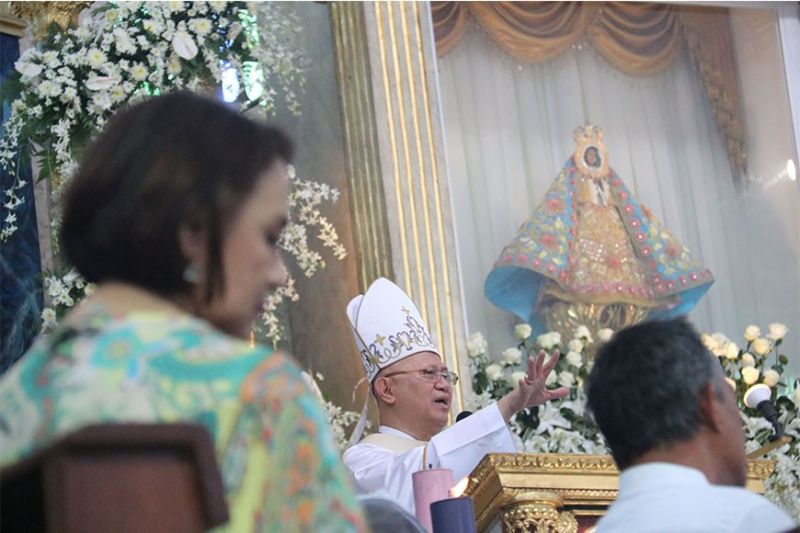 GUIDING VOICE. Cebu Archbishop Jose Palma delivers her homily during the Mass for the fiesta in honor of the Our Lady of Guadalupe in Cebu City on Thursday, Dec. 12, 2019. (Sunstar Photo / Amper Campaña)

This was the message of Cebu Archbishop Jose Palma in his homily during the 86th fiesta in honor of the Our Lady of Guadalupe in Cebu City on Thursday morning, Dec. 12, 2019.

Around 50 priests concelebrated the Mass. Eduardo Gonzales, honorary consul of Mexico for Cebu, also attended the celebration with his wife.

Palma found significance in the apparitions of the Blessed Virgin Mary before Juan Diego, an indigenous Mexican, and his sick uncle on Dec. 9-12, 1531.

The Blessed Virgin Mary’s appearances, said the prelate, convey the message of inclusivity.

“Unta mahimong parte sa atong devotion sa kang Mama Mary nga ang atong kasingkasing bukas sa tanan (I hope that our hearts are open to all as part of our devotion to Mama Mary),” he said.

He told the faithful to reflect on God’s love by all means, especially the Roman Catholic Church is celebrating 2019 as the year of ecumenism, inter-religious dialogue and the indigenous people’s year.

Respect lifeNoting that the appearances of the Blessed Virgin Mary happened during time when the Aztecs offered infants as sacrifices to their gods, Palma echoed the Church’s teachings against abortion.

“Unta, respetuhon ang kinabuhi sa kabataan diha pa sa tiyan sa ilang inahan (Hopefully, the lives of children must be respected even if they are still in their mothers’ wombs),” he said.

According to the Franciscan media, a non-profit ministry of the Franciscan friars, the feast in honor of the Our Lady of Guadalupe (also the patron saint of the Americas and Mexico) goes back to the 16th century, after her appearances to Juan Diego in a hill called Tepeyac (now part of a borough in Mexico City) on the morning of Dec. 9, 1531.

Towards the end of his homily, Palma thanked the people who keep on building churches. He encouraged the faithful to maintain the beauty of their churches.

The Archdiocesan Shrine of the Our Lady of Guadalupe in Barangay Guadalupe was founded on May 1, 1933.

In 2002, then Cebu Archbishop Ricardo Cardinal Vidal declared the Our Lady of Guadalupe to be the patroness of Cebu.

DevotionMarian devotee Rosa Pajugot, 62, accompanied her 82-year-old mother Oligaria. They came from Barangay Mambaling and joined other 700 devotees in paying homage to the Blessed Virgin Mary.

Pajugot is a devotee of the Our Lady of Guadalupe for 32 years already. She thanked the Blessed Virgin Mary, whom she believed had interceded her prayers.

The Blessed Virgin Mary’s intercession, she said, brought blessings in her life.

“Kanang maglisod mig pagkaon, akong i-ampo niya. Naa man poy mo-donate namo mga dato (I asked her to help us when we had nothing to eat. Some well-to-do persons donated food to us),” she said.

Pajugot said she always pray for her two children, one of whom suffered a nervous breakdown. Her other child was bitten by a dog and got afflicted with rabies, but her child eventually recovered from the illness. (WBS)