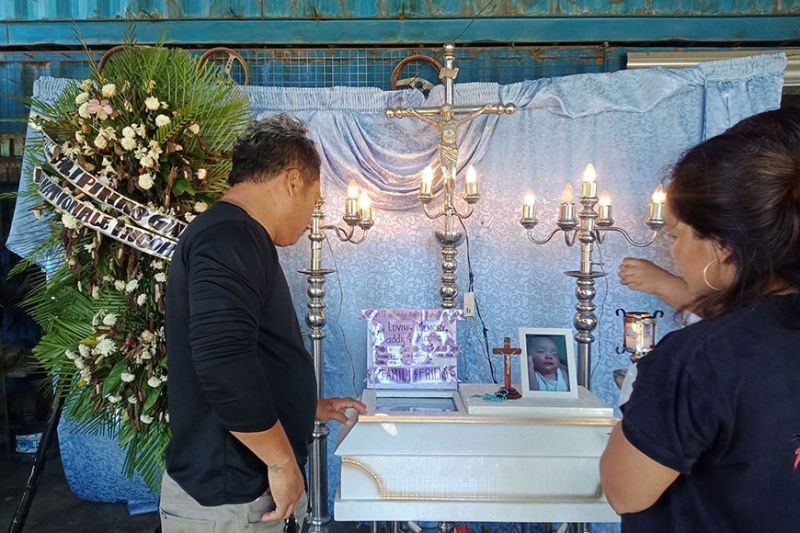 AN INFANT died a day after she was vaccinated at the Eversley Childs Sanitarium and General Hospital in Barangay Jagobiao, Mandaue City.

Parents Crisela Toniacao and Johnnel Abello were still in shock and couldn’t believe what happened to their second child, who was one month and 25 days old.

The couple told SunStar Cebu that Toniacao had a high fever when she gave birth to her baby through a cesarean section. The baby got sick and was given an antibiotic. Toniacao returned with the baby for a follow-up checkup and was told her baby’s fever had subsided and she was normal.

When the infant was six weeks old, she caught the couple’s first child’s cough and was again brought to the doctor, who prescribed medicine for one week.

The infant should have been immunized by then, but the doctor told Toniacao to wait until the infant’s cough was gone.

When they returned the following week for a checkup, the doctor said the infant was normal and was ready to be immunized in a week’s time.

Toniacao said the last time she administered cough medicine to her daughter was on Nov. 28, 2019. On Dec. 4, she had the infant vaccinated.

According to Toniacao, they arrived at the hospital at 10 a.m. The attending nurse was allegedly busy with his phone and just weighed her baby and proceeded to inject one vaccine in each of the infant’s legs and administer an oral vaccine, she said.

Toniacao said she was shocked when the nurse injected the vaccine without sterilizing her baby’s legs.

She shared her suspicion with her partner that the nurse might have wrongly immunized their baby, who wouldn’t stop crying since the injection.

“My daughter shook while she cried,” Abello said in Cebuano. He said their daughter’s left leg was kicking while the right leg trembled. The right leg was swollen and hot. Their daughter then developed a fever, he said.

They tried to contact their pediatrician but the latter could not be reached.

The couple decided to give the infant paracetamol at four-hour intervals starting at 6 p.m. At 2 a.m., they were awakened by the infant’s crying so Toniacao nursed her to put her to sleep.

At past 6 a.m., they noticed that their daughter was not responding and had blood coming out of her nose.

Toniacao said their daughter still had a pulse when they brought her to the Maayo Medical where the medical staff tried to revive her. They injected something in the infant three times to help her heart pump. The doctors also asked the couple’s permission to install a tube to support the infant’s breathing, which they gave. However, Toniacao said they noticed blood flowing into the tube from her daughter’s mouth.

The doctors decided to send the child to the Seamen’s Hospital. When they got there, the doctors injected something into their daughter to get her pulse, to no avail.

“The doctors did everything to try and revive your daughter, ma’am,” Toniacao quoted one of the medical staff in Cebuano.

After their daughter was declared dead, Abello said they wanted her to undergo an autopsy to determine the cause of death. He asked doctors for help and even went to funeral homes, private hospitals and also to the National Bureau of Investigation (NBI) 7.

Two doctors in a private hospital in Mandaue City were willing to conduct the examination, but they needed the guidance of a medico-legal officer. The couple requested one from the Mandaue City Health Office, but the person in charge was out of town.

Abello said he found a doctor who would autopsy his daughter but the doctor, who was also in charge of the Philippine National Police Crime Lab, was in Leyte and would not arrive in Cebu until Dec. 7.

While they waited for the doctor, Abello said the funeral home asked them if they wanted their daughter injected with formalin and placed in a coffin. He replied that they were waiting for the NBI to check their daughter’s body.

After NBI 7 personnel visited their house and took a photo of their daughter, the funeral home contacted them again and advised them to place the infant in a coffin.

The couple said they agreed to have their daughter injected with formalin after the doctor who would conduct the autopsy advised them to do so as long as no blood would be extracted.

On Dec. 6, the couple was told the doctor would arrive on Dec. 9.

The funeral home told them it had to extract their daughter’s blood so “it would not be rotten.” It fetched the infant’s body and extracted her blood.

When informed of the procedure, the doctor told the couple he couldn’t guarantee the result of the autopsy would be accurate since the blood had been extracted.

According to Abello, the funeral home also suggested writing down “convulsion” or “natural death” as cause of death and the couple agreed. The couple also signed a waiver.

However, the parents continue to suspect the vaccine might have caused their daughter’s death. Abello told Sunstar Cebu that they were still willing to have their daughter undergo an autopsy to put their suspicions to rest.

He said there were other infants who were immunized on the same day as Abello and Toniacao’s daughter and they didn’t suffer their daughter’s fate.

He said it was possible the vaccine had nothing to do with her death. The infant might have choked during feeding, especially if her head was not elevated, he said.

The nurse in charge of the immunization, according to Adlawan, has been in practice for almost 20 years. He believes that what the nurse did was according to hospital standards.

Adlawan said he couldn’t get a full statement from the nurse since the latter is out of town.

Adlawan told SunStar Cebu they already reported the case to the Regional Epidemiology Surveillance Unit (Resu) and they are waiting for its feedback.

He said their management is willing to coordinate with Resu and with the couple for the infant to be autopsied as they also want to know the real cause of death.

Adlawan hopes this case will not discourage parents from having their children immunized since vaccines are important to human health, adding that the public should not make any judgments until the autopsy results come out.

Toniacao and Abello’s daughter was buried at the Manila Memorial Park in Liloan, Cebu on Thursday, Dec. 12.