UN chief warns against 'survival of the richest' on climate 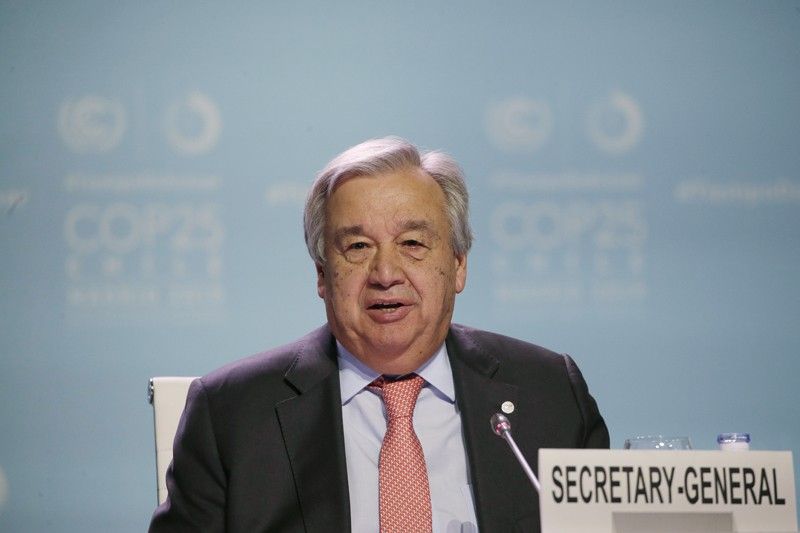 SPAIN. Antonio Guterres, Secretary-General of the United Nations, delivers a speech during a Global Climate Plenary event at the COP25 climate talks congress in Madrid, Spain on Wednesday, December 11. (AP)

António Guterres said unrestrained climate change would allow only the “survival of the richest," while former US Secretary of State John Kerry said the “absence of leadership” from Washington was a big obstacle in the talks.

“It's very difficult to get this done if the United States of America isn't there,” the veteran diplomat told The Associated Press (AP) during an interview in the Spanish capital, adding that he felt negotiators were holding their breath until the next United States (US) presidential election at the end of 2020.

President Donald Trump's administration has begun the process of abandoning an ambitious 2015 global deal forged by his predecessor Barack Obama that aimed to contain rising temperatures on the planet. Officially the US leaves the Paris accord on November 4, 2020, the day after the US election.

“I think Glasgow is already more of a target in many people's minds here, and that handicaps the process slightly,” Kerry said, referring to the venue of next year's UN climate summit.

In Madrid, “there will be accomplishments, there'll be some forward progress, but really, everyone knows that the crunch is going to come next year with the raising ambition issue," he added.

Not giving up on that goal, Guterres urged officials from almost 200 countries to embrace the economic opportunities that come with cutting greenhouse gases rather than focus on the risks to existing industries dependent on fossil fuels.

“For too long, vested interests have peddled the false story that economic growth and tackling climate change are incompatible,” the UN chief said. “This is nonsense.”

“In fact, failing to tackle global heating is a sure-fire recipe for economic disaster,” Guterres added.

He cited a study showing that shifting to a low-carbon economy could create 65 million new jobs worldwide by 2030 and boost growth by $26 trillion dollars.

“This transition needs to be done to benefit everybody," Guterres said. "And not doing this transition will only allow, as I said, the survival of the richest.”

At the talks, vulnerable countries expressed outrage over Australia's bid to hold onto piles of emissions vouchers left over from a now-discredited system that could allow it to meet its climate commitments without reducing pollution.

Asked about Australian Prime Minister Scott Morrison's recent assertion that his country was part of the “Pacific family,” the economy minister of Fiji responded that “when you have family members you also have some black sheep members too in the family.”

“At the moment, it would seem that they appear to be far from eating at the same table,” Aiyaz Sayed Khaiyum told reporters in Madrid, adding that he hoped Australia would “let go of their current position.”

Simon Stiell, environment minister of the Caribbean island of Grenada, warned that some countries at the UN meeting “are losing sight of the bigger picture as if there is no climate emergency.”

“This inaction is costing the lives of our people and impacting the lives and the livelihoods of millions around the world," Stiell said. "We need to stop talking. We know what must be done.”

Talks to agree rules for global carbon markets and aid for poor countries already affected by climate change have made little progress in recent days.

Bas Eickhout, an influential Green Party lawmaker in the European Parliament, said maintaining the “integrity" of the 2015 Paris climate accord was a priority for the 28-nation bloc.

Some negotiators have expressed concern that loopholes in a deal about international carbon markets could allow some countries to claim emissions reductions on paper that haven't actually been made.

“In that sense, from a European perspective, we are absolutely clear that: better no deal than a bad deal,” said Eickhout.

The summit's president, Chile’s Environment Minister Carolina Schmidt, urged delegates to find “no excuses for not reaching agreements" and added that the world's “youth and women" were demanding action, “one that is equal to the historical challenge that we are facing.”

“I call on you to work together to be able to give a positive response tomorrow,” she said.

Separately, two former top US officials signaled that in the absence of leadership from the US, Beijing had an opportunity to champion global leadership in fighting climate change if the world's second largest economy reconsiders its current promotion of coal.

“It would be down to China's everlasting credit if this policy of financing the construction of so many new coal plants in other countries could respectfully be reviewed and reconsidered," Al Gore, the former US vice president, told China's top climate official in Madrid, Vice Minister of Ecology and Environment Zhao Yinming.Kerry, who as the US top diplomat paved the way for the Paris accord by brokering a

US-China climate agreement in 2014, told the AP that Beijing's reliance on coal “will undo a lot of the good that's been done," but added that Chinese involvement in fighting climate change “is critical."

He also said the Trump administration's trade war with China is dragging possible solutions to the fight against climate change.

“The absence of the United States to work with China as an effective partner is a huge loss to the acceleration process we need," he said. “It really is sad to see our country absent in many ways in terms of leadership." (AP)