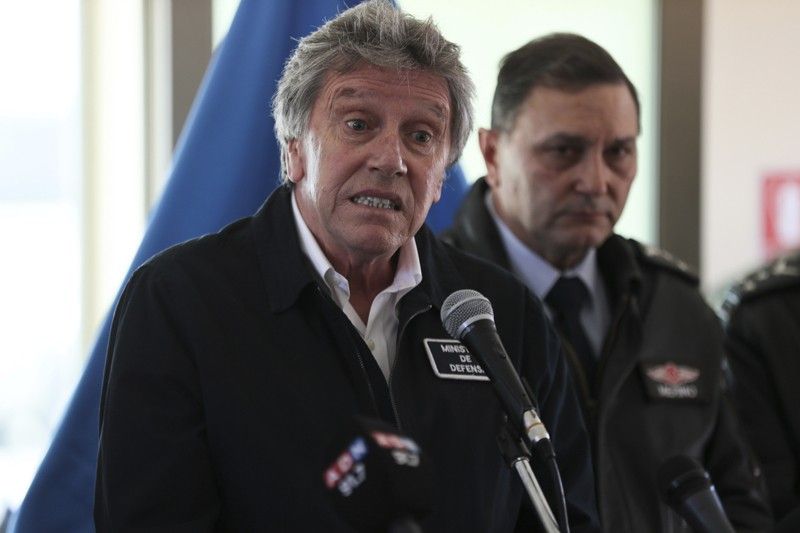 CHILE. Chile's Defense Minister Alberto Espina speaks during a news conference at the Chilean Air Force base in Punta Arenas, Chile on Thursday, December 12. Espina said human remains have been found from a military aircraft that disappeared on a flight to Antarctica. The plane was carrying 38 passengers when it took off from southernmost Chile on Monday, December 9. (AP)

SANTIAGO, Chile -- Searchers combing Antarctic seas have recovered parts of a military transport plane and human remains belonging to some of the 38 people aboard who vanished en route to the frozen continent, Chilean officials said on Thursday, December 11.

Air Force General Arturo Merino said at a news conference that based on the condition of the remains, he believed it would be “practically impossible” that any survivors would be pulled from the water alive.

An international team of searchers continued the hunt, while officials on shore said they would use DNA analysis to identify the crash victims.

Among the recovered items, searchers have found a landing wheel, sponge-like material from the fuel tanks and part of the plane's inside wall. Personal items include a backpack and a shoe, officials said.

"Remains of human beings that are most likely the passengers have been found among several pieces of the plane," Merino said. “I feel immense pain for this loss of lives.”

The C-130 Hercules, a military transport plane, departed on Monday afternoon, December 9, from a base in Punta Arenas in far-southern Chile on a regular maintenance flight for an Antarctic base. Radio contact was lost 70 minutes later.

After midnight, the Air Force declared the plane a loss, but it wasn’t until on Wednesday, December 10, that a plane scanning the seas first spotted floating debris believed to be from the plane.

The searchers located the remains roughly 30 kilometers (19 miles) from where pilots last made contact with the control tower, said officials, adding that the hunt has taken them to sea depths of 4,000 meters (13,123 feet).

Ed Coleman, a pilot and chair of the Safety Science Department at Embry-Riddle Aeronautical University in Prescott, Arizona, said recovering the plane's flight recorder will be key to understanding what went wrong.


But recovering the bulk of the plane from the ocean's bottom -- more than 2 miles underwater -- could be very difficult. He said they could resort to taking video from remote operated vehicles.

It may be impossible to return some of the crash victims to their families, he said.

“It’s possible that some of them may never be recovered,” Coleman said. “A lot of times that happens in a deep-water recovery. It’s just not possible.”

The plane was flying over Drake Passage, the sea between the southern tip of South

The aircraft would have been about halfway to the Antarctic base when it lost contact, officials have said, adding that no emergency signals had been activated.

Officials haven't said what they believe led the plane to crash.

General Cristián Pizarro said the first of the recovered human remains will arrive ashore Friday, December 13. Many relatives of the victims rushed to the Punta Arenas in search of answers.

Just three of the passengers were civilians, including Ignacio Parada, 24, who was a stand-out student of civil engineering in his last year at the University of Magallanes. He was headed to study drinking water systems at the military base.

Claudia Manzo, 37, was the only woman on board. She worked in the Air Force service that deals with aerial photographs of the continent. She also served as one of Parada's research advisers. She leaves behind a five-year-old son.

Another of those aboard, electrician Jacob Pizarro, 38, had lost his wife five months ago, leaving behind two children, ages 2 and 6, who are in the care of their grandmother.

Defense Minister Alberto Espina expressed his gratitude for the international support in the search. It included 23 airplanes and dozens of ships from Argentina, Brazil, United States, Great Britain and Uruguay as well as Chile. (AP)
< Previous PageNext Page >