Thunberg 'a bit surprised' to be Time Person of the Year 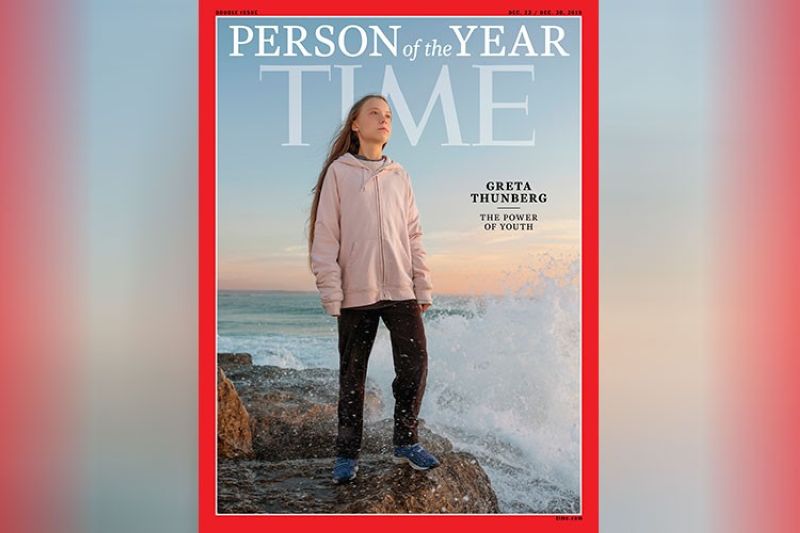 MADRID -- Teenage climate activist Greta Thunberg said she was surprised and honored on Wednesday, December 11, to be named Time’s youngest Person of the Year, while adding that others in the global movement she helped inspire deserve to share the accolade.

The 16-year-old Swede has become the face of a new generation of environmental activists, drawing large crowds with her appearances at protests and conferences over the past year and a half.

Some have welcomed her work, including her speeches challenging world leaders to do more to stop global warming. But others have criticized her sometimes combative tone.

"For sounding the alarm about humanity’s predatory relationship with the only home we have, for bringing to a fragmented world a voice that transcends backgrounds and borders, for showing us all what it might look like when a new generation leads, Greta Thunberg is Time’s 2019 Person of the Year,” the media franchise said on its website.

As she left a United Nations (UN) climate conference in Madrid, Thunberg told The Associated Press (AP) that she was “a bit surprised” at the recognition.

“I could never have imagined anything like that happening,” she said in a phone interview.

“I'm of course, very grateful for that, very honored,” Thunberg said, but added: "It should be everyone in the Fridays for Future movement because what we have done, we have done together.”

Thunberg said she hoped the message being pushed by her and other activists -- that governments need to drastically increase their efforts to combat climate change -- is finally getting through. The “Greta effect” has already been linked to a rise in support for environmental parties in Europe.

But she insisted that the media should also pay attention to other activists, particularly indigenous people, whom she said “are hit hardest by the climate and environmental crisis."

Her concern over the slayings of indigenous Brazilians in the Amazon drew a harsh rebuke from the Latin American nation's president on Tuesday, December 10.

“Greta said that the Indians died because they were defending the Amazon,” Jair Bolsonaro said. “It's impressive that the press is giving space to a brat like that,” he added, using the Portuguese word ”pirralha."

Thunberg responded by changing her bio on Twitter, where she has over 3 million followers, to say “Pirralha."

The teenager has also been a strong advocate of science, regularly citing complex studies about the causes and impacts of climate change.

On Wednesday, Thunberg used her address at the UN's annual climate summit to accuse governments and businesses of misleading the public by holding talks that she said aren't going to stop the world's “climate emergency.”

“The real danger is when politicians and CEOs are making it look like real action is happening, when in fact almost nothing is being done, apart from clever accounting and creative PR,” she said.

Thunberg cited scientific reports showing that national pledges to reduce planet-warming greenhouse gas emissions aren't enough to meet the ambitious goal set in the 2015 Paris climate accord of keeping temperatures from rising by more than 1.5 degrees Celsius (2.7 Fahrenheit) by the end of the century.

"This is not leading, this is misleading,” she told officials, adding that “every fraction of a degree matters.”

Thunberg said the youth climate movement, which has staged repeated worldwide protests attended by hundreds of thousands of people, has managed to spread awareness about the need to urgently emissions and help those already affected by global warming.

“To get in a sense of urgency in the conversation that is very needed right now to be able to move forward,” she said. "That, I think, is our biggest success.”

Asked whether she thought world leaders were beginning to respond to this message, Thunberg told the AP: “They say they listen and they say they understand, but it sure doesn't seem like it.”

“If they really would listen and understand then I think they need to prove that by translating that into action,” she added.

Thunberg said the experience of the past 15 months, going from solo-protester outside the Swedish parliament to speaking in front of world leaders at the UN General Assembly, had changed her.

"I think life is much more meaningful now that I have something to do that has an impact," she said.

Thunberg has tried to preserve some privacy despite the relentless interest she's received from media and adoring fans.

She was mobbed on her arrival in Madrid last week and the attention paid to her appearances at the climate conference has far outstripped that of other events, save for Hollywood stars like Harrison Ford.

“I would like to be left alone,” Thunberg said when asked about her immediate plans. But before heading home to Sweden, to spend Christmas with her family and dogs, she will attend a climate protest Friday, December 13, in Turin, Italy.

“After that, I have no school to return to until August because I've taken a gap year,” she said.

"I will probably continue a bit like now, travel around. And if I get invitations, to come. And just try everything I can," she added.