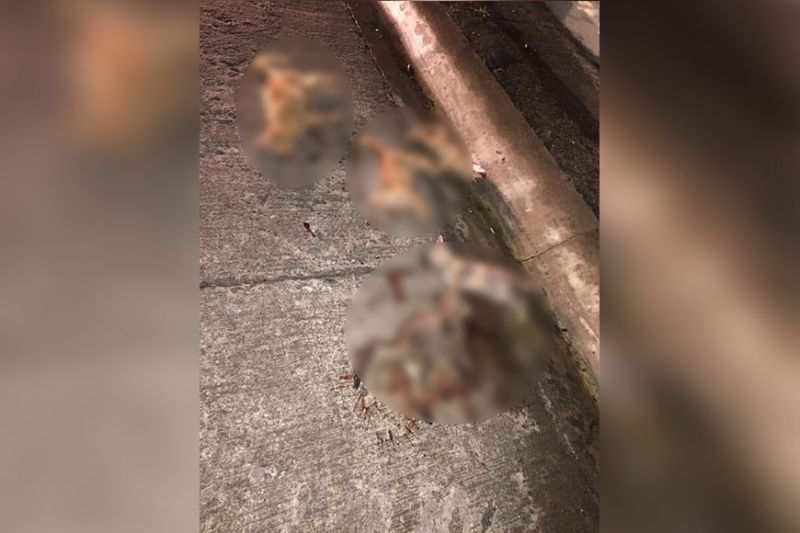 A FACEBOOK post showing five stray cats found lifeless on the street on Tuesday dawn, December 10, which were seemed to be intentionally killed, spurred public outrage against animal cruelty and drew concern from animal welfare advocates.

Naval took to social media to air her concern regarding the dead cats sprawling in Barcelona Street in Villa Alevida Subdivision, Barangay Indangan in Buhangin, Davao City bathed in their blood.

“Mao ni Akong nakita Sa labas Sa blay Sa among silingan pag uli nako Karon Lang mga 1 am. Mga ering murag gi massacre. Mga wai kaluoy!!! (This is what I saw outside the house of our neighbor when I went home around 1 a.m. The cats seemed to be massacred. They have no pity)” Naval’s post read.

She added that she called the Central 911 to report the case but was told to report it first to the barangay. She also has already requested for the barangay officials to have the incident investigated.

Naval said that as of yesterday, there was no update yet on the investigation since there is no strong evidence that will lead to the suspect. They assumed that the perpetrator is a resident within the subdivision.

Under Republic Act No. 8485, an act to protect and promote the welfare of all animals in the Philippines by supervising and regulating the establishment and operations of all facilities utilized for breeding, maintaining, keeping, treating or training of all animals either as objects of trade or as household pets, any person found guilty violating such will face punishment of imprisonment of 6 to 12 years and a fine of at least P100,000.

For his part, Police Major Roy C. Mateo, station commander of Buhangin Police, said based on the initial investigation it was found out that the cats allegedly were accidentally ran over by an unknown type of vehicle. A deeper probe is now being conducted to determine the circumstances that led to the killing of the cats and punish the perpetrators.

"We urge the public especially the residents in the area who have knowledge on the incident to report to us for immediate solution of this case. People must be sensitive that cruelty to animals is a serious offense under the law," Mateo said.

He added that they only came to know of the incident after it trended online.

Mateo said they have designated animal welfare trained enforcement officers (AWEO) to focus on the case.

In an interview with Marites Sia-Tan Batacan, founder and president of Animal Rescue Rehabilitation and Fostering (ARRF)-Davao, Inc., said as an animal welfare advocate, she was saddened with the report. She also only read it on Facebook.

Batacan said they are willing to assist the complainant provided that there are witnesses or evidence.

However, she revealed that most of the times the witness cowers to proceed with the case and back off, saying they are only interested when emotions are high but once these are settled, they no longer cooperate.

She is also seeking justice for the animals and hope for the apprehension of the people who perpetrated the killing of the cats.

“Animal abusers are definitely abnormal, psychotic criminals. And criminals must pay, through our laws or through karma,” she said.

In terms of law enforcement and response to these reports, she further called on the policemen to strengthen their action as she observed that although there is already such incident if there is no complaint they will not take action, unlike in other countries like the United States.