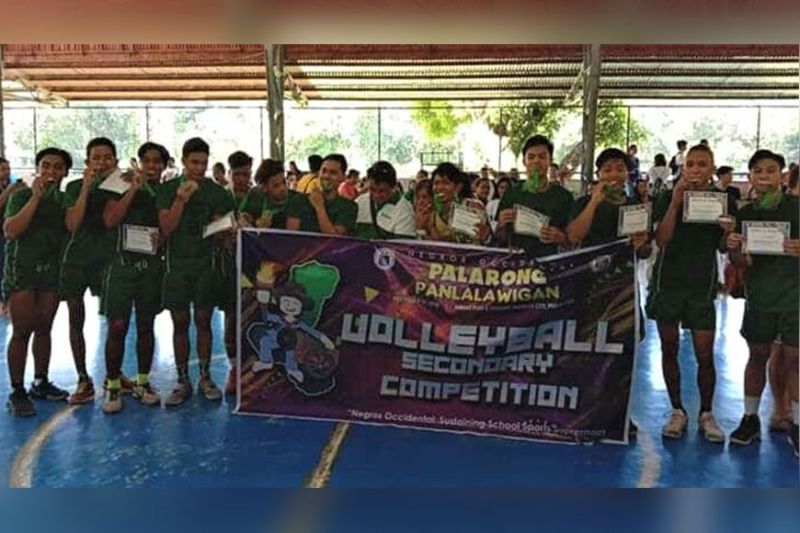 BACOLOD. Bacolod City secondary volleyball boys in posterity after clinching the title on Thursday beating Area 4 in 5 sets in the just concluded 2019 Palarong Panlalawigan. They will be representing Negros Occidental in the upcoming Regional Meet in Makato, Aklan. (Jerome S. Galunan Jr.)

IT TOOK lots of sweat, blood, and sacrifices before Bacolod City secondary volleyball boys made history on Thursday, December 12, when they beat Area 4 in five sets to clinch the title in the just-concluded 2019 Palarong Panlalawigan.

Playing before the jam-packed crowd at the University of Negros Occidental-Recoletos covered court, the Bacolod City Golden Titans of Claro Tigallo started slowly as they messed up in the opening set, wherein almost nothing went right with the team yielding to the La Carlota City-anchored squad, 15-25.

Despite downed by two sets, the Bacolod team did not lose hope as they regrouped and poured a stunning performance to take the third set, 25-15.

In the fourth set, Bacolod maximized their advantage as momentum shifted to their favor and eventually tied the match at two sets apiece.

Still, in control of the game, Bacolod surged to a commanding 8-4 lead in the deciding set.

As both teams changed ends, Bacolod kept control of the game but, service errors hurt them as Area 4 came close, 11-9.

Determined to win the match and represent Negros Occidental in the Regional Meet next year in Makato, Aklan, the Bacolod squad sealed the victory, 15-10.

"Today, we changed history. Making it to the Top 4 is a great achievement already. But, to be a champion is unbelievable," Tigallo said.

"I did not expect this kind of achievement although my boys kept on saying that we will go to the Regionals," he added.

"To the parents, thank you so much for entrusting your children to me. In spite of finishing our training late, you never complain. To our OIC, Ma'am Ma. Cristina Doriman and my fellow teachers at Sum-ag National High School, thank you for the support," he said.