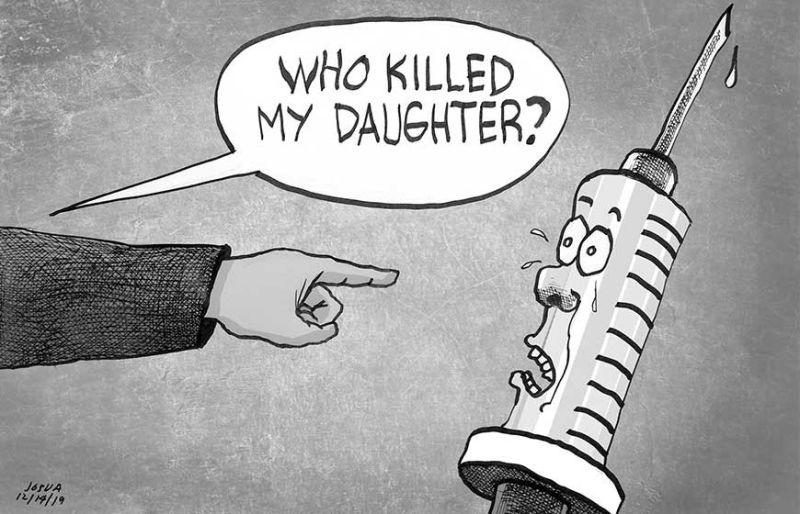 AN INFANT girl died less than a week shy of celebrating her two months of existence, her brief life fraught with illness and visits to the doctor’s office.

Understandably, her parents Crisela Toniacao and Johnnel Abello are grief-stricken. They still can’t believe their daughter is gone so soon after burying her at the Manila Memorial Park in Liloan on Thursday, Dec. 12, 2019.

According to the infant’s death certificate, she died a “natural death” from “convulsion.”

The parents, though, think otherwise. And yet, despite their suspicions, the couple signed a waiver, saying they just heeded the funeral home’s suggestion.

However, they wanted to know what really killed their daughter. They requested an autopsy but it seemed like no one was interested in conducting the examination except for two doctors in a private hospital in Mandaue City who agreed on the condition that they would have the guidance of a medico-legal officer and a doctor who happened to be out of town.

The day before the infant died, she was immunized at the Eversley Childs Sanitarium and General Hospital in Barangay Jagobiao.

The mother believes that had something to do with her daughter’s death, especially after she noticed that the nurse allegedly didn’t sterilize her daughter’s legs before injecting each one with the vaccine.

Although they have no evidence, they went ahead and blamed the vaccine for their daughter’s death.

Dennis Adlawan, Eversley’s administrative officer, denied any negligence, saying the nurse in charge of the immunization has been in practice for almost two decades.

“Every time we do the immunization, we make sure that the baby is well, the vital signs are okay. Then that’s the time we give the immunization,” Adlawan said, pointing out that there were other infants who were immunized on the same day Toniacao and Abella’s daughter received her shots and they didn’t die.

He, too, believes only an autopsy will put everybody’s suspicions to rest. Adlawan doesn’t want this incident to discourage the public from getting their children vaccinated.

It had happened before right after the Dengvaxia scare and many parents stopped having their children immunized. As a result, the Philippines recorded the worst dengue outbreak in years killing hundreds of children this year alone. Polio cases have also reemerged for the first time in 19 years.