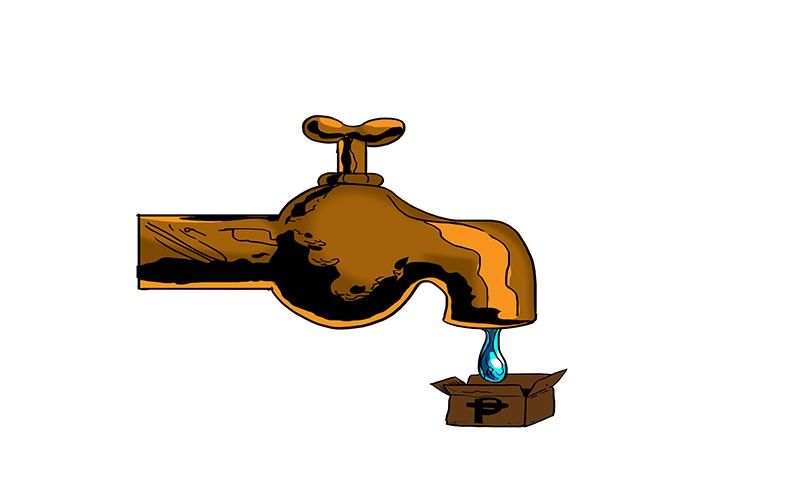 THE taps are dry today, which is apt.

At no time does a problem seem more urgent than when we feel its consequences directly.

A hot day in December or a driving rain that soaks thousands of commuters and floods low-lying streets remind us just how real the climate emergency is. In the same way, faucets that yield nothing but a short hiss on a humid Saturday afternoon make me want to understand Metro Manila’s water service troubles better.

If I relied only on social media chatter, these would be the story’s broad strokes: the large corporations that provide 16 million Metro Manila consumers with water had wanted to raise rates some four years ago, but government regulators prevented them.

So, they went to the Permanent Court of Arbitration in Singapore to ask that the Philippine Government be compelled to compensate them for the revenues they would have made, had they been allowed to adjust rates as their contracts stated.

When an arbitral ruling granted them a combined P10.8 billion in awards, President Rodrigo Duterte ordered a review of the concession agreements and claimed economic sabotage. Both companies have since said they will no longer collect compensation (P7.39 billion for Manila Water and P3.4 billion for Maynilad) but will instead open themselves to a renegotiation and possible amendment of their agreements with the government.

Tough talk and a refusal to bow to big business save the day, or so the pro-administration parts of Facebook and Twitter would want us to believe.

Except it’s not that simple. There are other forces at work, other questions we need to ask.

Last week, the government agency in charge of the privatization of water services in Metro Manila revoked a board resolution that extended until 2037 its concession agreements with two companies, Manila Water and Maynilad Water Services.

Both companies confirmed receiving the board resolution from the Metropolitan Waterworks and Sewerage System (MWSS), but Manila Water told the Philippine Stock Exchange that it did not believe the new resolution would revoke the extension of its concession agreement from 2022 to 2037. Manila Water’s agreement was extended in October 2009, when Gloria Arroyo was President.

But Metro Manila’s water problem goes back further than that. And it is now a problem seen and felt in other parts of the country, Metro Cebu included. Even if your own taps flow freely, you don’t have to look far to find someone who has to wake up past midnight to store water in large containers, otherwise their household would have no supply the next day.

When President Fidel Ramos first brought up the idea of privatizing water services during his term (1992-1998), the water services problem was already complex. It included a supply shortage, inefficient distribution that led to waste and was worsened by pilferage, the lack of attention to and investment in watershed conservation, and “the serious matter of graft and corruption in all the water agencies.”

That last part comes from the National Water Crisis Act of 1995 or Republic Act 8041. In this law, government clearly admits it lacks the resources to fix or improve water facilities, much less build new ones, and so must turn to the private sector, through build-operate-transfer agreements.

It also gave President Ramos a year to enter into negotiated contracts for water supply projects, with government paying only to acquire road right-of-way. In 1997, the Ayala and Lopez groups surfaced over two other competitive bidders and won their concession agreements. (For a good look at the context, do look up the series “Public Interest, Private Hands” by Ralf Rivas of Rappler.)

Now, the Duterte administration must find out which provisions of these agreements need to be amended. Or if it insists on working with other private sector players, what terms must be put in place so that government and technical experts can get better oversight over such deals than they have in the last 22 years. Can it now afford to consider returning water services completely under government control?

Would that be a wise idea?