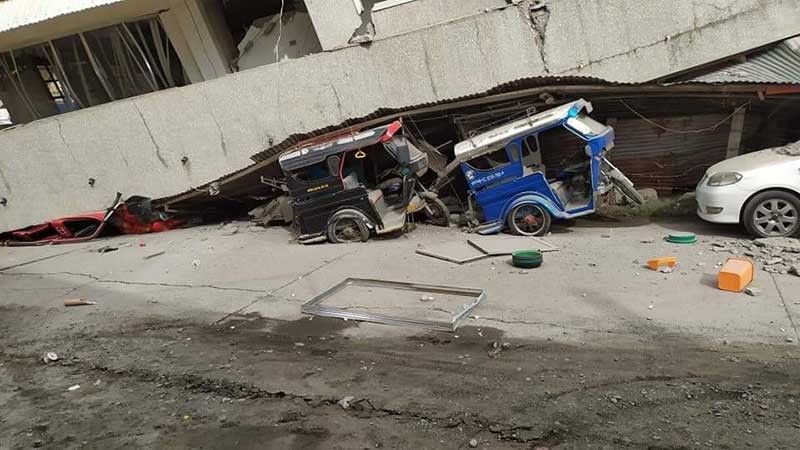 (UPDATED) A six-year-old girl died in Matanao town while 12 persons were injured and several others were feared trapped when a couple of structures collapsed in Padada town, both in Davao del Sur, following the magnitude 6.9 earthquake that struck near the town.

The Philippine Information Agency (PIA) Davao regional office said the Davao del Sur Public Information Office reported that the girl, identified as Cherbelchen Imgador, was inside their house in Barangay Asinan in Matanao when it collapsed.

In Padada, Municipal Disaster Risk Reduction Management Officer Luke Cadoyas made an urgent call for assistance in conducting search and rescue operations because his team is not properly equipped and skilled. The call was made through the PIA.

Two commercial buildings and an old water reservoir collapsed in Padada. Four were injured near the Southern Trade store while eight residents near the reservoir were also hurt. Several shoppers and employees were believed trapped in Southern Trade.

No casualties were reported when the second building, the two-story Canlas Commercial building, also collapsed.

Several roads and bridges in Davao region, meanwhile, were found to have sustained cracks after the tremor, officials said.

President Rodrigo Duterte, who was at home in Davao City with his daughter Veronica "Kitty", is unhurt, Presidential Spokesperson Salvador Panelo assured.

Veronica and her mother, Honeylet Avanceña, are also fine. Avanceña was on her way home when the ground shook. Panelo said her car swayed, but she was unhurt.

The Philippine Institute of Volcanology and Seismology (Phivolcs) initially reported the epicenter of the strong tremor near Padada, but later revised its advisory.

Phivolcs had warned that damage and aftershocks were expected. Shallow quakes are usually more destructive.

A magnitude 5.2 quake occurred about an hour later, at 3:09 p.m., about 19 kilometers south of Matanao. Other aftershocks were as strong as magnitude 4.0.

The Davao City Information Office said the Mahayahay Bridge on Diversion Road has been closed to vehicles because of cracks.

As of 4 p.m. Sunday, all vehicles have been diverted to Matina Crossing going to McArthur Highway.

The Davao City Government said it was coordinating with the Department of Public Works and Highways (DPWH) on this matter.

Classes in technical and vocational schools are also suspended.

The President's youngest son said this is to pave for the inspection of all school buildings to check on their structural integrity following the quake.

Areas with structural damage are to be immediately condemned and closed to the public.

Resumption of classes will be on a case-to-case basis on Tuesday, December 17. (MVI/SunStar Philippines)