Strongest quake to hit Mindanao in 2019 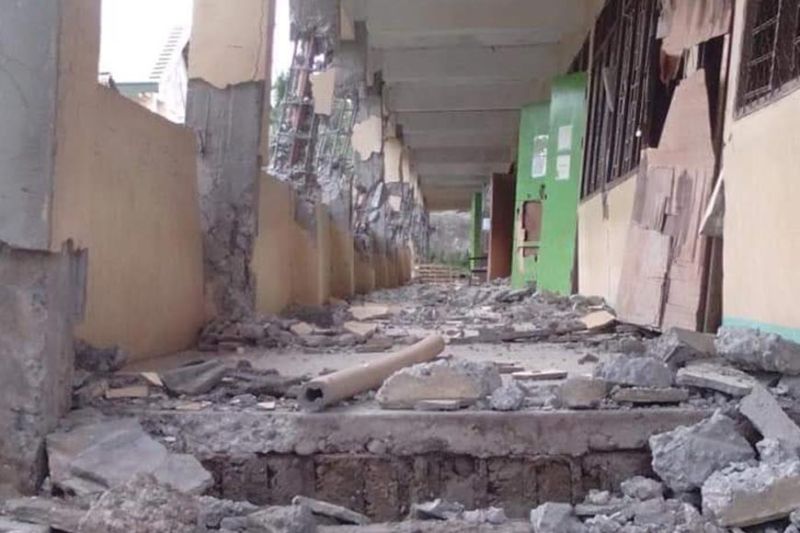 RESIDENTS of a condominium along C.M. Recto Avenue in Davao City were half dressed and barefoot when they rushed out of their building following a magnitude 6.9 earthquake that struck Matanao, Davao del Sur at 2:11 p.m. Sunday, December 15.

This latest earthquake, which occurred 45 days after the series of major earthquakes in Mindanao, was the strongest to date in 2019.

The Philippine Institute of Volcanology and Seismology (Phivolcs), in its third advisory on the same incident, said the epicenter was located about five kilometers north of Matanao town at a depth of three kilometers.

The quake was tectonic in origin.

These tremors struck near Tulunan, Cotabato but were felt in several areas in Mindanao.

The October 31 earthquake caused the collapse of Ecoland 4000 and compelled the government to condemn eight residential buildings.

Following the quake on Sunday, social media was abuzz with reports on damaged structures and deaths and injuries due to the quake. However, the sentiments of many Dabawenyos were the same - this has to be the strongest quake felt this year.

In its first advisory on the quake, Phivolcs said the tremor occurred about six kilometers north of Padada town at a depth of 30 kilometers.

An hour later, Phivolcs revised its advisory to say that the quake struck about nine kilometers north of Matanao at a depth of only three kilometers.

The latest advisory, issued at 5:26 p.m. Sunday, said the quake was centered about five kilometers north of Matanao at a depth of three kilometers.

A six-year old girl in Barangay Asinan in Matanao, was confirmed dead due to the earthquake, the Davao del Sur Provincial Information Office reported.

The victim, identified as Cherbelchen Imgador, was inside their house when it collapsed, the DavSur PIO report stated.

In Padada, Davao del Sur, 12 people were injured after a couple of structures collapsed.

Four individuals who were near the three-story Southern Trade commercial buildings were hurt when the building collapsed, according to Municipal Disaster Risk Reduction Management Officer Luke Cadoyas.

Several shoppers and employees were also feared to have been trapped inside the collapsed building.

Still in Padada, eight residents were injured when an old water reservoir at the public cemetery collapsed.

The two-story Canlas Commercial building also collapsed, but no one was reported hurt.

Cadoyas made an urgent call for assistance in the search and rescue operations at the Southern Trade, admitting that his team is not properly equipped and skilled.

He also confirmed an incident where flower vendors at the public market were pinned down by a concrete wall that fell when the ground shook.

Cadoyas said they were not done making the casualty count and were still conducting rescue and retrieval operations.

According to the initial report of the City Government of Davao, a number of establishments in the city were damaged following the earthquake.

New cracks were found on the structures of Palmetto Place in Ma-a. The city condemned two buildings of the condominium complex after the October 31, 2019 earthquake.

"The entire building 2 and 3 have already been abandoned since the last earthquake, except for 5 residents who refused to leave. Forced evacuation will be done in coordination with the owners of the building," the city government said.

Cracks were also found on the structures of SM City Davao. In a statement, the mall management said it is conducting a thorough inspection of all its facilities.

"The safety of our customers, tenants, and employees is our utmost priority," the management said.

Major cracks were also found at the Center Point overpass in Barangay Matina Crossing. The overpass was cordoned off to keep the public away.

In Barangay Lizada, seven houses were damaged and one two-story house collapsed.

The City Goverment of Davao has also issued an advisory on the total closure of Mahayahay Bridge along Matina Pangi/Carlos P. Garcia Road because of cracks.

"As of 4 p.m., all vehicles are diverted to Matina Crossing going to McArthur Highway. Davao City LGU is coordinating with DPWH on this matter," the city government said in a statement.

The local government of Davao City announced the suspension of classes on Monday, December 16, in all public and private schools in Davao City due to quake.

All establishments and organizations must immediately take precautionary measures to ensure the structural integrity of their buildings by conducting safety inspection with a qualified engineer. Areas with structural damages must be immediately condemned and close off from public use, the proclamation signed by acting Mayor Sebastian Duterte, read.

Teachers must report to work to prepare the classrooms for the resumption of classes depending on the discretion of the school heads in consideration of the safety of their personnel.

Panabo City Mayor Jose E. Relampagos also declared the suspension of classes in both private and public schools in all levels in the city.

The City Government of Panabo said in a statement that this is to give way for school heads, the disaster office, and its partner agencies to conduct a thorough inspection of school facilities.

Photos of the badly damaged Matanao High School have been posted on social media.

Areas serviced by the Dumoy Water Supply System Lines 1 and 2 will experience low water pressure to no water due to power interruption of the wells following the earthquake.

DCWD, in a Facebook advisory, said there is no definite time of resumption.

Duhaylungsod said the agency has started checking waterlines after the earthquake.

She added that they checked the structural integrity of the major water infrastructure after the previous earthquakes.

For this earthquake na medyo kusog-kusog, we need to do another round of inspection. It is the SOP (standard operating procedures) of our field personnel that patrols in our wells and storage facilities in addition to our technical team that monitors our pipes especially the big ones, he said.

It can be recalled that elevated areas in Davao City experienced water interruption or low water supply for four days in November when DCWD repaired one of its water transmission pipelines. The pipelines were damaged by the tremors in October 2019.