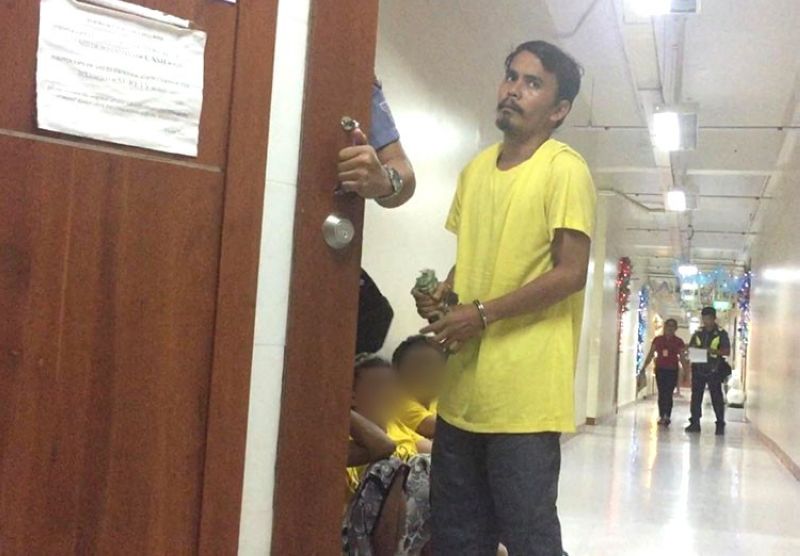 He was originally charged with violation of section 4[c][2] of RA 10175, which is punishable by 40 years imprisonment.

Under his plea agreement Monday, however, he pleaded guilty to another offense under section 4[b] of RA 9775.

Nelson Turayno, who hails from Iligan City, is still facing other charges

of qualified trafficking, acts of lasciviousness and rape.

He was arrested in Cebu City on April 12, 2019 in a joint operation by the National Bureau of Investigation-Anti-Human Trafficking Division (NBI-AHTRAD) and the Philippine National Police-Women and Children Protection Center (PNP-WCPC).

“Turayno preyed on vulnerable children, sexually abusing young Filipino boys for his own deviant desires. He then recorded himself raping these young children in videos that he shared with other offending pedophiles around the world -- men who selfishly consume videos of suffering children only to satisfy their perverse lusts. They care nothing for the trauma and violence they inflict on the most precious members of our society,” said lawyer John Tanagho, International Justice Mission (IJM) Cebu Field Office director.

"Today’s conviction in Cebu City will resound globally as a shout of justice from the Philippines for all children ravaged by online child sexual abuse -- the world is on your side and we will bring this violence against you to an end until all children are safe and free,” he added.

Federal agent Graeme Marshall, Australian Federal Police liaison officer-Philippines, stated that "the result in court today demonstrates the commitment of the Australian Federal Police, Queensland Police Service, our state and territory partners in Australia, together with the Philippine National Police, National Bureau of Investigation International Justice Mission and our international partners, including Interpol and Europol, to ensuring perpetrators of child sexual exploitation are charged and prosecuted regardless of their location.”

"We are committed to protecting our children from the violence of this kind of exploitation," said Regional State Prosecutor Fernando Gubalane, chair of the Inter-Agency Council Against Trafficking-Central Visayas.

"I applaud all of our partners who continue to work together to let the world know that we are serious in this fight to end the online sexual exploitation of children. This case is just one example of how we will continue to pursue justice," he added.

The joint PNP and NBI investigation was a consequence of an Australian Federal Police and Queensland Joint Anti Child Exploitation Team (Jacet) referral in August 2018.

Armed with evidence acquired during investigations, a search warrant was secured on April 11, 2019 from Judge Ramon B. Daomilas Jr. of Regional Trial Court Branch 11 Cebu City, the designated Cybercrime Court in Central Visayas.

The following day, joint forces from NBI-AHTRAD and the PNP-WCPC arrested Turayno for possession of child sexual exploitation materials (CSEM) with intent to sell, distribute, publish or broadcast, with the use of information communications technology.

He was arrested at his rented room in Barangay Luz, Cebu City where thousands of CSAM, including videos depicting Turayno sexually abusing children, were found in his possession.

"Turayno's actions are inexcusable, and this case is another example of how these online sex offenders will be held accountable under the law for their actions,” he said. "WCPC will support working under Picacc to ensure global cooperation and response until the Philippines is protected from those who victimize our innocent children using the internet. Regardless of the nationality of the perpetrator or wherever he is, we will stop at nothing to provide justice in these cases."

NBI-AHTRAD chief Janet Francisco echoed these sentiments. "It is critical that we all work together as partners with the common goal to end the online sexual exploitation of children. This case is an example of the excellent international, national, and local collaboration that will make this possible. To those still abusing children, take this as a lesson that we will not stop until justice is served."

The Picacc is a collective effort to combat child exploitation across the Philippines by law enforcement -- the PNP, the NBI, the Australian Federal Police, and the United Kingdom National Crime Agency, in partnership with IJM. This collaborative international effort protects children through an enhanced global response to combating the online sexual exploitation of children (Osec).

So far in IJM-supported cases, 74 persons have been convicted in the Philippines for perpetrating Osec since 2011. IJM has supported Philippine law enforcement agencies in the arrest of 238 Osec perpetrators and the rescue of 566 victims and children at-risk across the country.

Occurring in different communities in the Philippines, Osec is a crime that violates the Anti-Trafficking in Persons Act or RA 9208 (as amended by RA 10364), which comes with a maximum penalty of life imprisonment and a fine of P2 million to P5 million.

You may report a suspected case of Osec by texting ENDOSEC (space) (message/report) to 7444-64.