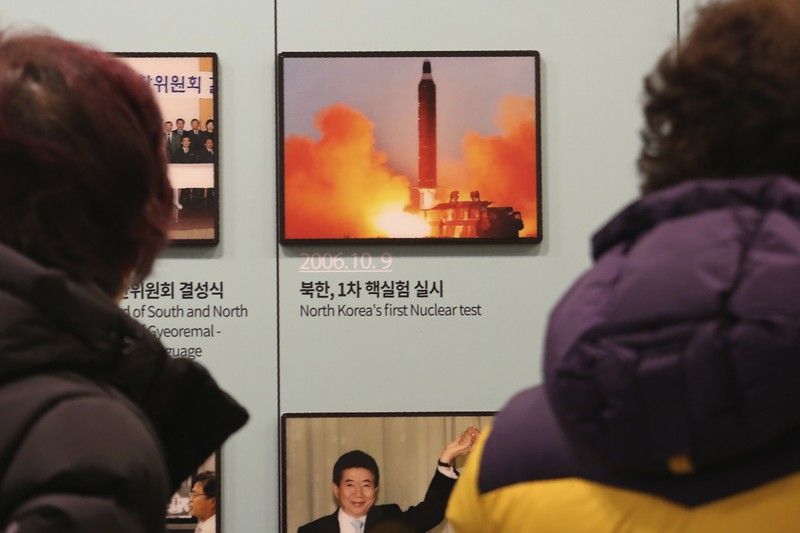 SOUTH KOREA. Visitors watch a photo showing North Korea's missile launch at the Unification Observation Post in Paju, South Korea, near the border with North Korea, Friday, Deember 13. North Korea accused the United States of "hostile provocation" on Thursday, December 12, for criticizing its ballistic missile tests during a United Security Council meeting and warned that the Trump administration may have blown its chance to salvage nuclear negotiations. (AP)

(UPDATED) China and Russia are calling on the United Nations (UN) Security Council to terminate sanctions on North Korean exports such as textiles, seafood and statues, “with the intent of enhancing the livelihood of the civilian population.”

A draft resolution circulated to council members on Monday, December 16, by the two allies of North Korean leader Kim Jong Un would also lift a ban on North Koreans working overseas and terminate a decision to repatriate all those earning income abroad by December 22.

The council expressed concern when the repatriation provision was adopted two years ago that earnings from the nearly 100,000 overseas North Koreans, according to a United States (US) estimate, are being used to support the North’s nuclear and ballistic missile programs.

China and Russia made these and other proposals 16 days before Kim’s end-of-December deadline for the US to come up with new proposals to revive nuclear diplomacy.

At Kim’s second summit with US President Donald Trump last February, negotiations faltered after the US rejected North Korean demands for broad sanctions relief in exchange for a partial surrender of the North’s nuclear capabilities.

North Korea has carried out 13 ballistic missile launches since May seeking to pressure Washington, and it has hinted at lifting its moratorium on nuclear and long-range missile tests if the Trump administration fails to make substantial concessions before the new year.

The proposed resolution, obtained by The Associated Press, welcomes the continuing dialogue between the US and North Korea and calls on all parties to consider implementing “further practical steps to reduce military tension on the Korean peninsula and probability of any military confrontation by all appropriate means.” Its suggestions include adoption of a formal declaration and/or peace treaty ending the 1950-1953 Korean War.

The draft resolution also calls for “prompt resumption of the six-party talks or re-launch of multilateral consultations in any other similar format, with the goal of facilitating a peaceful and comprehensive solution through dialogue.”

The six-party talks involving North Korea, South Korea, the US, China, Russia and Japan began in 2003 and led Pyongyang to accept a deal in September 2005 to end its nuclear weapons program in exchange for security, economic and energy benefits. But after difficult negotiations, North Korea refused to accept US-proposed verification methods, and the agreement fell through in December 2008. The six-party talks have been stalled since then.

The China-Russia draft resolution reiterates “that all parties should commit to work toward complete denuclearization of the Korean peninsula.” It would call on the nuclear weapon states — the U.S., Russia, China, Britain and France — that are parties to the Nuclear Nonproliferation Treaty to work with North Korea on “the process of practical denuclearization of the Korean peninsula.”

It welcomes further development of relations between the two Koreas, in particular on rail and road connections, and would exempt the inter-Korean rail and road projects from sanctions.

The proposed resolution would terminate specific provisions in council resolutions adopted in 2016 and 2017 that banned the sale or import of textiles, seafood and “statues.”

The draft resolution would also lift a ban on North Korea’s import of some industrial machinery and transport vehicles used for infrastructure construction that can’t be diverted to the country’s nuclear and ballistic missile programs.

It also would ask the Security Council committee monitoring sanctions on North Korea to adopt “the most favorable approach towards requests for exemption from existing UN sanctions ... for humanitarian and livelihood purposes.”