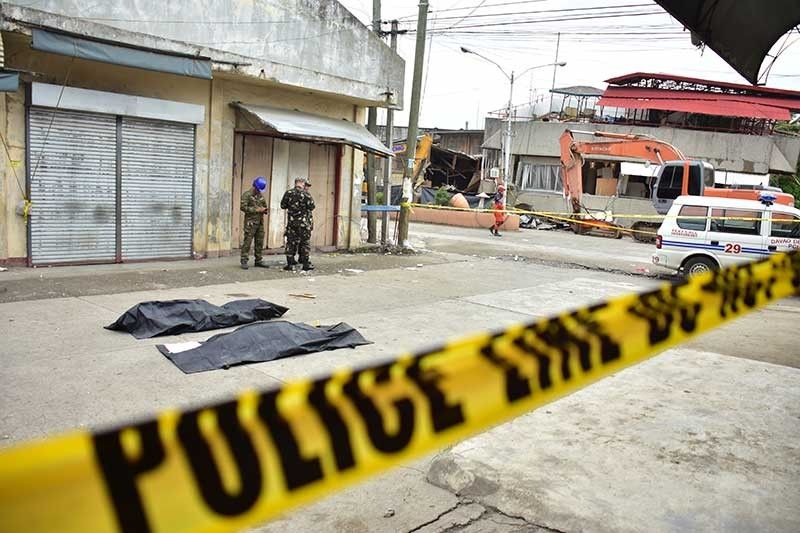 DAVAO. Rescuers retrieved two bodies from the collapsed building in Padada, Davao Del Sur. They were identified as Elsa Ababon and Evangelyn Artiaga, who were both shopping for some goods when the ground shook on December 15, 2019. (Photo by Macky Lim)

(UPDATED) The casualty count from the magnitude 6.9 earthquake that hit Davao on Sunday, December 15, has climbed to eight.

Rescuers recorded three fatalities in Padada, two in Matanao, one in Hagonoy, one in Magsaysay, and one in Bansalan.

They were identified as:

The bodies of Ababon, Artiaga and Golyegos were retrieved from the collapsed Southgreen Commercial (not Southern Trade) building in Padada town, Davao del Sur.

Ababon was pulled out of the building first at about 2 a.m. Monday, December 16, followed by Artiaga at around 8 a.m. and Golyegos at 9:55 p.m. also on Monday.

Contrary to initial reports that six were trapped in the collapsed building, the Bureau of Fire Protection (BFP) said their life and motion detector has not detected any human bodies inside after the retrieval of Golyegos.

The search, rescue and retrieval operations were jointly undertaken by the Municipal Government of Padada, Philippine National Police Regional Office in Davao Region (PRO-Davao), Rescue 911 of Davao City, and BFP-Davao.

In its update on Tuesday, December 17, the National Disaster Risk Reduction Management Council (NDRRMC) said 49 individuals were also injured due to the earthquake.

A total of 36 public structures and 19 other structures were destroyed while 11 schools sustained damage. The affected structures included places of worship and commercial buildings.

The disaster bureau said 1,951 families or 9,755 persons were affected by the tremor. Some 1,913 families of 9,565 persons took temporary shelter in evacuation centers.

The quake, which struck at 2:11 p.m. Sunday about nine kilometers north of Matanao town in Davao del Sur at a depth of only three kilometers, occurred 45 days after the series of tremors that struck Cotabato in late October.

The Philippine Institute of Volcanology and Seismology (Phivolcs), in a primer on the latest quake, said ground shaking was felt as far as 300 kilometers away from the epicenter.

As of 1 p.m. Monday, December 16, 2019, the Philippine Seismic Network has recorded a total of 530 small to moderate earthquakes.

All quakes since October 16, 2019 were tectonic and inland. They do not indicate volcanic activity, Phivolcs said.

Phivolcs warned of landslides, rock falls, and other types of mass movements on mountainous or hilly areas.

The Davao Region in southern Mindanao is one of the seismically active regions in the country, Phivolcs said.