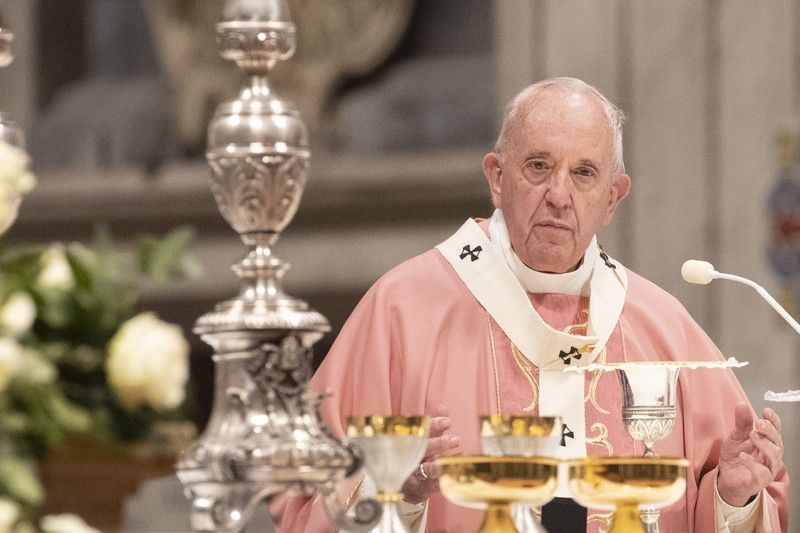 THE VATICAN. Pope Francis celebrates a Mass for the Philippine community of Rome, in St. Peter's Basilica at the Vatican to Sunday, December 15. (AP)

VATICAN CITY -- Pope Francis abolished the use of the Vatican's highest level of secrecy in clergy sexual abuse cases on Tuesday, December 17, responding to mounting criticism that the rule of “pontifical secrecy" has been used to protect pedophiles, silence victims and prevent police from investigating crimes.

Victims and their advocates cheered the move as long overdue, but cautioned that the proof of its effectiveness would come when the Catholic hierarchy is forced to respond to national inquiries, grand jury subpoenas and criminal prosecutors who are increasingly demanding all internal documentation about abusers.

“The carnival of obscurity is over,” declared Juan Carlos Cruz, a prominent Chilean survivor of clergy abuse and advocate for victims.

In a new law, Francis decreed that information in abuse cases must be protected by church leaders to ensure its “security, integrity and confidentiality.” But he said the rule of “pontifical secrecy” no longer applied to abuse-related accusations, trials and decisions under the Catholic Church’s canon law.

The Vatican’s leading sex crimes investigator, Archbishop Charles Scicluna, said the reform was an “epochal decision” that will facilitate coordination with civil law enforcement and open up lines of communication with victims.

While documentation from the church's in-house legal proceedings will still not become public, Scicluna said, the reform now removes any excuse to not cooperate with legitimate legal requests from prosecutors, police or other civil authorities.

The new laws were issued Tuesday, Francis’ 83rd birthday, as he struggles to respond to the global explosion of the abuse scandal, his own missteps and demands for greater transparency and accountability from victims, law enforcement and ordinary Catholics alike.

“The reforms are long overdue but symbolize an important step in the right direction," said the Survivors Network of those Abused by Priests (Snap), the victims advocacy group.

“Still right now they are only words on paper and what needs to happen next is concrete action," it said.

The new norms are the latest amendment to the Catholic Church’s in-house canon law -- a parallel legal code that metes out ecclesial justice for crimes against the faith — in this case relating to the sexual abuse of minors or vulnerable people by priests, bishops or cardinals. In this legal system, the worst punishment a priest can incur is being defrocked, or dismissed from the clerical state.

When he was a cardinal, Pope Benedict XVI had persuaded St. John Paul II to decree in 2001 that these cases must be handled by the Vatican's Congregation for the Doctrine of the Faith and be dealt with under the “pontifical secret" rule. The Vatican had long insisted that such confidentiality was necessary to protect the privacy of the victim, the reputation of the accused and the integrity of the canonical process.

However, such secrecy also served to keep the scandal hidden, prevent law enforcement from accessing documents and silence victims, many of whom often believed that the “pontifical secret” rule prevented them from going to the police to report their priestly abusers.

While the Vatican has long tried to insist this was not the case, it also never mandated that bishops and religious superiors report sex crimes to police, and in the past it has also encouraged bishops not to do so.

According to the new instruction, which was signed by the Vatican secretary of state but authorized by the pope, the Vatican still doesn’t mandate reporting the crimes to police, saying religious superiors are obliged to do so where civil reporting laws require it.

But it goes further than the Vatican has gone before, saying: “Office confidentiality shall not prevent the fulfillment of the obligations laid down in all places by civil laws, including any reporting obligations, and the execution of enforceable requests of civil judicial authorities.”

The Vatican has been under increasing pressure to cooperate more with law enforcement, and its failure to do so has resulted in unprecedented raids in recent years on diocesan chanceries by police from Belgium to Texas and Chile.

But even under the threat of subpoenas and raids, bishops have sometimes felt compelled to withhold canonical proceedings given the “pontifical secret” rule, unless given permission to hand documents over by the Vatican. The new law makes that explicit permission no longer required.

“The freedom of information to statutory authorities and to victims is something that is being facilitated by this new law," Scicluna told Vatican media.

Robert Hoatson, a survivor and founder of the clergy abuse advocacy group Road to Recovery, said the change was long overdue and a “hopeful sign that the church will finally hold itself accountable for the centuries-old scandal.”

The Vatican in May issued another law explicitly saying victims cannot be silenced and have a right to learn the outcome of their canonical trials. The new document repeats that and expands the point by saying not only the victim, but any witnesses or the person who lodged the accusation cannot be compelled to silence.

“Excellent news,” tweeted prominent Irish survivor Marie Collins, a founding member of Francis' sex abuse advisory commission who noted that the reform was one of the first proposals of the commission.

“At last a real and positive change," she wrote.

Lawyers for victims and accused priests have also advocated for a change to the pontifical secret rule, since it restricted their access to documentation from the case.

Scicluna said the reform now facilitates making documents available to “interested parties” in a penal case, although it is not clear if these lawyers will still only be able to view the documents -- as is currently the case — or can now make and keep copies of them, under the understanding that they remain confidential.

In recent years, individual abuse scandals, national inquiries, grand jury investigations, United Nations denunciations and increasingly costly civil litigation have devastated the Catholic hierarchy’s credibility across the globe, and Francis’ own failures and missteps in dealing with particular cases have emboldened his critics.

In February, he summoned the presidents of bishops' conferences from around the globe to a four-day summit on preventing abuse, where several speakers called for a reform of the pontifical secrecy rule.

“To date, the church has been especially lenient towards priests who offend against older children" with pornography, said Anne Barrett Doyle of the online resource BishopAccountability.

“Extending the pornography ban sends a message that this vulnerable group of minors must be protected too,” she said.

The Vatican's editorial director, Andrea Tornielli, said the new law is a “historical" follow-up to the February summit and a sign of openness and transparency.

“The breadth of Pope Francis' decision is evident: The well-being of children and young people must always come before any protection of a secret, even the ‘’pontifical secret,'" he said in a statement.

Also Tuesday, Francis accepted the resignation of the Vatican's ambassador to France, Archbishop Luigi Ventura, who is accused of making unwanted sexual advances to young men.

Ventura turned 75 last week, the mandatory retirement age for bishops, but the fact that his resignation was announced on the same day as Francis' abuse reforms didn't seem to be a coincidence. (AP)