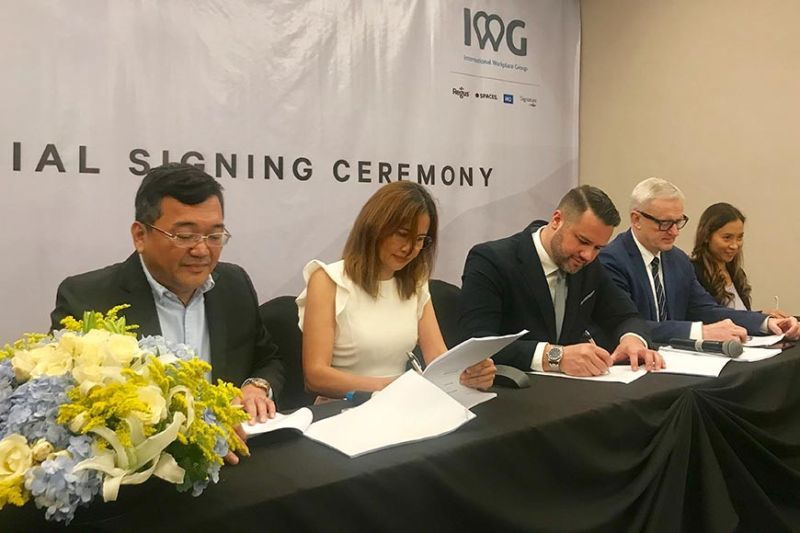 The firm on Wednesday, Dec. 18, 2019, signed a franchise partnership agreement with global workspace provider International Workplace Group (IWG) to develop eight centers in six cities in the Visayas region within a span of five years.

It also announced it is acquiring two Regus sites in Cebu.

API is the first workspace franchise partner of IWG in Southeast Asia and in the Philippines.

The company said it is confident that the endeavor will “generate strong yields and higher property values within its own portfolio, as well as the wider market.”

API chief executive officer and president Ray Go Manigsaca identified Cebu City, Lapu-Lapu City, Dumaguete, Iloilo and Bacolod as potential sites for the workspace centers that will have a total of at least 2,500 workstations.

Joy Veloso, executive vice president of API, said the company’s venture into the co-working and flexible office space segment is a natural progression for a company that already has stakes in residential and hotel developments.

Veloso said API wants to rebalance its property portfolio and the company recognizes the solid growth and high occupancy rate of this sector in today’s digital era.

“We all know that the property sector is cyclical and we want to ride with the cycle,” said Veloso, adding that the firm’s venture into this segment will boost the company’s commercial portfolio to 10 percent.

IWG is the world’s largest provider of flexible workspace solutions with brands such as Regus, Spaces, HQ and Signature by Regus. It has 2.5 million customers in over 3,400 locations throughout 120 countries worldwide.

In the Philippines, IWG has 28 locations in 10 cities across Metro Manila, Cebu, Davao and Clark.

“This partnership with such a successful homegrown property developer will help us contribute to suburban economic growth,” said Matthew James Kenley, head of partnership growth in Asia Pacific of IWG.

“This will benefit the local economy in numerous ways from creating jobs both inside and outside the center, stimulating businesses and services in the nearby area, improving productivity and opening of new opportunities to those who live locally,” said Kenley.

He noted that on a global scale, IWG’s business growth is accelerating and that it wanted to keep up with the demand through opening new centers through franchising.

“Our partnership (with API) will enable us to work smarter, better and accelerate our growth,” said Kenley.

Lars Wittig, IWG country manager for Philippines, Thailand, Vietnam, Cambodia and South Korea, said the franchise partnership will help IWG cement its foothold in the Philippines, a country he described as the “best performing market” in Asia for flexible office space.

Wittig said its occupancy in the Visayas is almost 100 percent, the reason they wanted to do more and expand quicker to fill in the demand.

The business of flexible working spaces is fast rising in the global market. There are an estimated 35,000 workspaces in the world today with a global market value of US$26 billion.

“We see an exciting growth taking place here. We see a lot of inclusive growth in the Philippines,” said Wittig.

IWG entered the Philippine market in 1998. It expanded its business to Cebu in 2013.