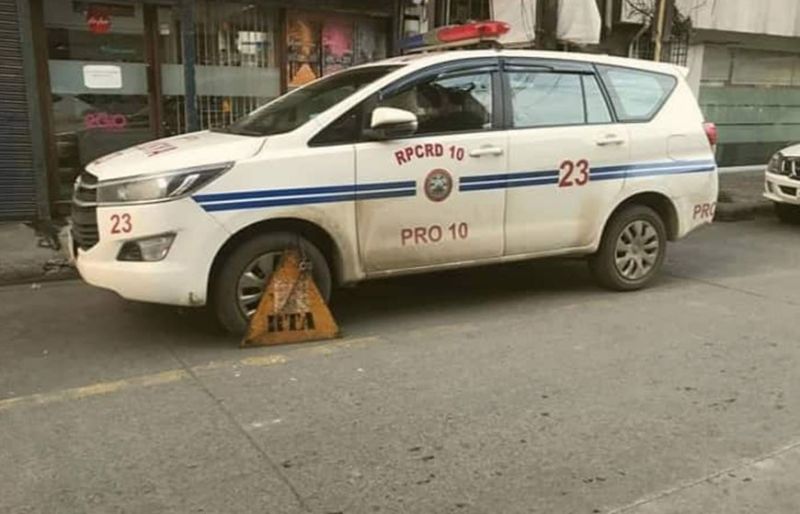 THE Police Regional Office (PRO)-Northern Mindanao is conducting an investigation on the policeman who drove a patrol car that got clamped for parking in a "no parking" area on Cruz-Taal Street on Wednesday, December 18.

If investigators found his reasons valid, he will only be reminded of the traffic rules. But if there is enough merit to warrant a penalty, Hortillosa said the police officer could get suspended.

Initially, Hortillosa said the police officer claimed to have not seen the "yellow box," which indicates that the area should be free from any obstructions.

The police officer was attending a forum with a police official when a traffic personnel saw the patrol car and clamped it.

Violators will be fined P1,500 if they are found parking in a no parking zone.

Hortillosa said the patrol car is already back at the PRO-Northern Mindanao headquarters after paying the penalty.

The patrol car is owned by the PRO Regional Community Affairs Development Division and was driven by a police senior master sergeant.

"Wala ni gitolerate sa PRO nato, kay kami baya ang tig-implement sa kahusay ug kalinaw unya kami na nuon mo violate. So we will investigate the incident but assure the police officer that due process will followed in the course of the investigation," he said.

(We don't tolerate this, because we are supposed to be the ones implementing policies for peace and order. So we will investigate the incident but assure the police officer that due process will be followed in the course of the investigation.)