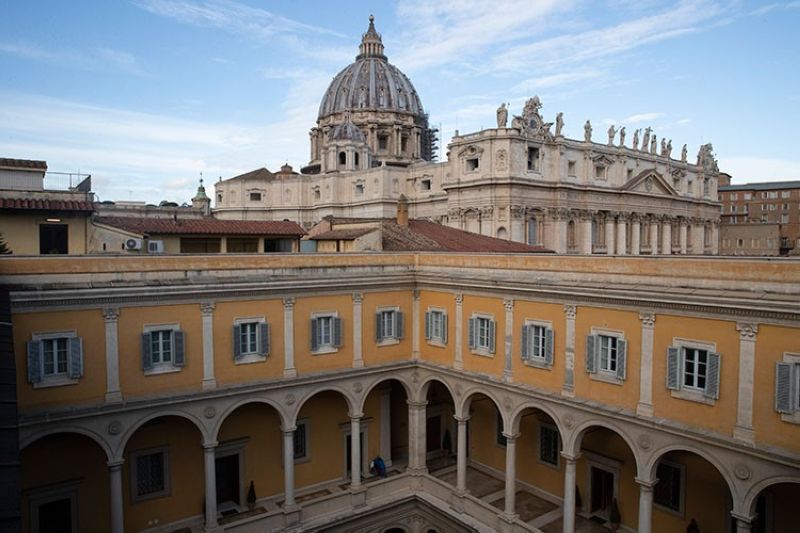 ITALY. This Monday, December 9, 2019 photo shows the Congregation for the Doctrine of the Faith offices at the Vatican. (AP)

VATICAN CITY -- The Vatican office responsible for processing clergy sex abuse complaints has seen a record 1,000 cases reported from around the world this year, including from countries it had not heard from before -- suggesting that the worst may be yet to come in a crisis that has plagued the Catholic Church.

Nearly two decades after the Vatican assumed responsibility for reviewing all cases of abuse, the Congregation for the Doctrine of the Faith is today overwhelmed, struggling with a skeleton staff that hasn’t grown at pace to meet the four-fold increase in the number of cases arriving in 2019 compared to a decade ago.

“I know cloning is against Catholic teaching, but if I could actually clone my officials and have them work three shifts a day or work seven days a week," they might make the necessary headway, said Monsignor John Kennedy, the head of the congregation’s discipline section, which processes the cases.

"We're effectively seeing a tsunami of cases at the moment, particularly from countries where we never heard from (before)," Kennedy said, referring to allegations of abuse that occurred for the most part years or decades ago. Argentina, Mexico, Chile, Italy and Poland have joined the US among the countries with the most cases arriving at the congregation, known as the CDF.

Kennedy spoke to The Associated Press and allowed an AP photographer and video journalists into the CDF’s inner chambers -- the first time in the tribunal’s history that visual news media have been given access. Even the Vatican’s most secretive institution now feels the need to show some transparency as the church hierarchy seeks to rebuild trust with rank-and-file Catholics who have grown disillusioned with decades of clergy abuse and cover-up.

Pope Francis took a step towards showing greater transparency with his decision this week to abolish the so-called “pontifical secret” that governs the processing of abuse cases to increase cooperation with civil law enforcement.

But the CDF’s struggles remain, and are emblematic of the overall dysfunction of the church’s in-house legal system, which relies on bishops and religious superiors, some with no legal experience or qualified canon lawyers on staff, to investigate allegations of sexual abuse that even the most seasoned criminal prosecutors have difficulty parsing. The system itself is built on an inherent conflict of interest, with a bishop asked to weigh the claim of an unknown alleged victim against the word of a priest who he considers a spiritual son.

Despite promises of “zero tolerance” and accountability, the adoption of new laws and the creation of expert commissions, the Vatican finds itself still struggling to reckon with the problem of predator priests -- a scourge that first erupted publicly in Ireland and Australia in the 1990s, the US in 2002, parts of Europe beginning in 2010 and Latin America last year.

"I suppose if I weren't a priest and if I had a child who were abused, I'd probably stop going to Mass," said Kennedy, who saw first-hand how the church in his native Ireland lost its credibility over the abuse scandal.

“I'd probably stop having anything to do with the church because I'd say, ‘Well, if you can't look after children, well, why should I believe you?”

But he said the Vatican was committed to fighting abuse and just needed more time to process the cases. “We're going to look at it forensically and guarantee that the just outcome will be given,” he said in an interview.

“It's not about winning people back, because faith is something that is very personal,” he added. “But at least we give people the opportunity to say, ‘Well, maybe give the church a second chance to hear the message.’” (AP)