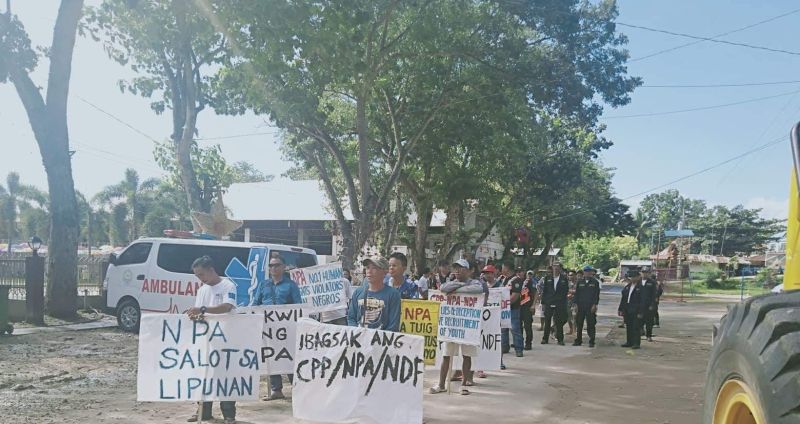 RELATIVE to the 51st founding of the Communist Party of the Philippines (CPP) celebration on Thursday, December 26, the army in Western Visayas offered peace talks anew to the rebels.

In his message, 3rd Infantry Division spokesperson Captain Panchito Cenon said: "The people's will is for peace and development. May this time around make us realize that the real victim of fighting the duly instituted government is the common people."

The military official said the rebels should abandon the armed conflict, pointing out that after more than 50 years of fighting the armed group still failed to accomplish a strategic victory over government forces.

"Should you continue to believe that something has to be done for the welfare of the people, then come out in the open and voice your ideas in the proper forum and let's work together in achieving that genuine and lasting peace," he added.

On the part of the CPP-New People’s Army (NPA), Cecil Estrella, spokesperson of the Roselyn Jean Pelle Command (RJPC) of the NPA-Northern Negros Guerilla Front, said RJPC-NPA and the broad masses of the people in Northern Negros are one with the revolutionary movement and people in the whole country in celebrating the 51st anniversary of the CPP.

"The Red commanders, fighters and revolutionary forces of the RJPC-NPA offer the highest salute to all revolutionary martyrs who offered their lives in the service of the masses! Particularly in Northern Negros, the RJPC-NPA salutes the great sacrifice of Red fighters Ka Julie and Ka Zero, along with peasant youth Sulpicio Hernan Jr. who were martyred during the encounter in Marcelo, Calatrava last April," she said.

Estrella added that Negrosanons also mourn the passing of activists and civilians "who fell victim to the bloody counter-revolutionary war waged by the US-Duterte regime against the people."

"Like the peasants massacred in Sagay in 2018, Felipe Dacal-dacal, Bernardino 'Toto' Patigas and other victims of state terrorism in Negros Island are now considered heroes of the people and the struggle for justice," she said.

Estrella claimed that in 2018, armed revolutionary movement gained strength through active and determined engagement with the challenges posed by de facto Martial Law in Negros.

Meanwhile, the Philippine Army reported that thousands of citizens in Northern Negros and Bacolod City gathered in different venues to protest and condemn the atrocities committed by the NPA rebels.

Indignation rallies were held in the cities of Escalante, San Carlos, Bacolod and the Municipality of Toboso relative to the 51st Founding Anniversary of the CPP.

According to the Philippine Army, the protesters condemn the 51 years of oppression, torment and terroristic actions committed by the rebels to the Filipino people, which have affected socio-economic growth, disrupted peaceful living and hindered peace and progress in the province and the country.

The protestors also expressed support for the total end of insurgencies.

“Since more localities in Northern Negros declared CPP-NPA as persona non-grata, I highly appreciate these concerned Negrosanons for they were aware on the lies and deceptions of the communist terrorists, its initiative significantly contributes the mandate of President Rodrigo Duterte to End Local Communist Armed Conflict," Logan pointed out.

On Thursday, the indignation rally was held against the Communist Party of the Philippines-New People’s Army-National Democratic Front (CPP-NPA-NDF) at the old Bacolod City Hall at 8:00 a.m.

The activity, spearheaded by the Department of Interior Local Government (DILG)-Bacolod, was intended to bring awareness of the acts of the CPP-NPA-NDF terrorists.

Two former NPAs spoke against their previous affiliation and encouraged the attendees, especially parents, to protect their children against recruitment by party-list organizations under the CPP, since the youth are the main targets of the terrorist organization.

A video presentation was shown to the attendees which showed the deceit, atrocities and criminal activities of the NPAs over their 51 years of existence.

The program ended with the message of support and pronouncement of indignation from May Perez Malongayon, DILG-Bacolod program manager.