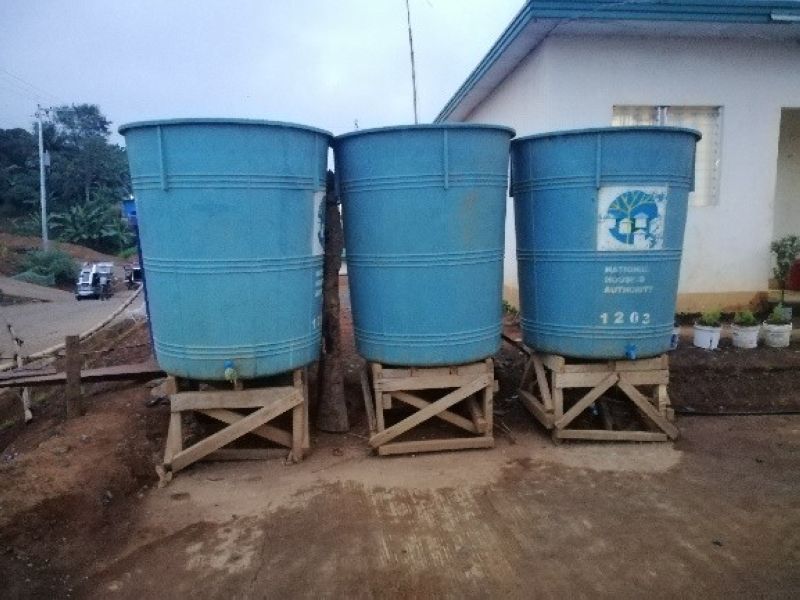 MARAWI CITY. The water reservoirs originally installed in the transitory houses but were removed by the residents so that the NHA water tanks can fill them (Riz Sunio). 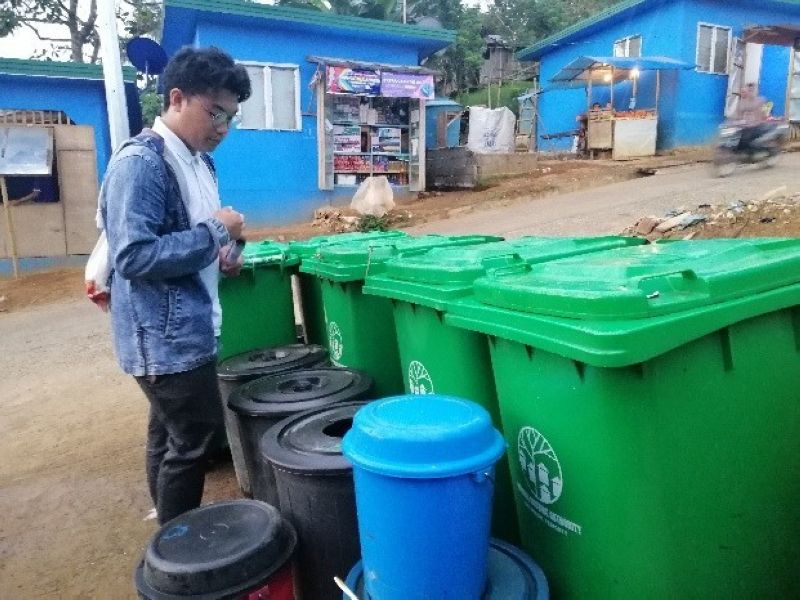 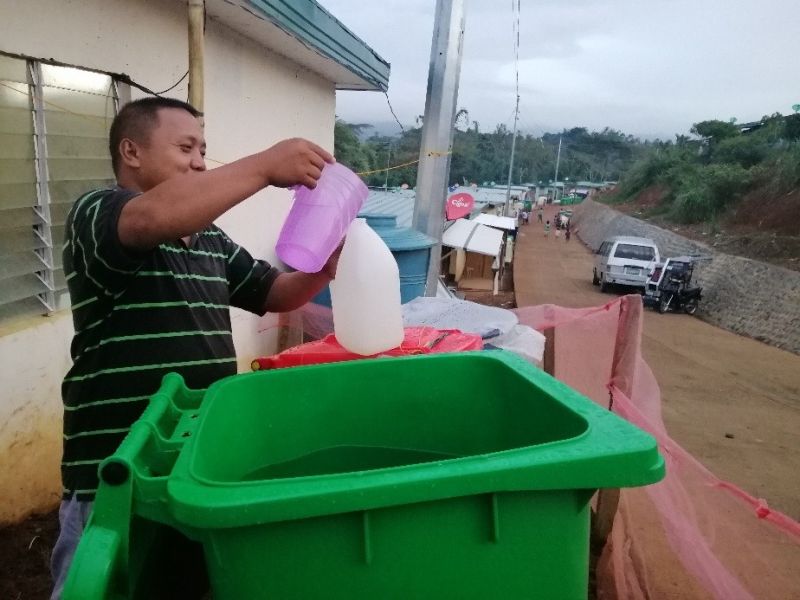 EVERY morning, the internally displaced persons (IDPs) wait for the “bombero," the National Housing Authority’s (NHA) water truck that supplies water for the 1,500 homes of Lakeview Boganga Transitory Shelter in Marawi City.

In almost every corner block of the shelter, five to seven green waste containers are placed together with other makeshift water containers the locals call “baril,” which are waiting to be filled by the bomberos.

These waste containers were supposed to help with the waste management and sanitation of the shelter, and the IDPs were scolded by the NHA for using them for water. However, the residents deem that they need to secure their household water first before other matters.

Muslimah Solaiman, an IDP who evacuated to Baloi Evacuation Center before coming to Boganga, said a filled waste container has about 10 pails of water.

Other blocks decided to remove the water reservoir installed by NHA in their homes and placed about three of them out in the highway for the “bombero” to reach them easier.

To help the senior citizens who could no longer lift heavy pails, the residents installed a hose for them to get water from the reservoirs.

The water filled in both the reservoirs and makeshift containers are being shared by everyone in the block.

All of them also tries to make do of the insufficient water supplied to them day-by-day for cleaning, laundry and bathing, shared Caironisa Cabugatan, 27, who formerly lived in what is now Marawi City’s Ground Zero and is now housed in the Boganga Transitory Shelter.

The shelter started housing IDPs in January 2019 and is home to about 1,500 families from evacuation centers such as the Sarimanok and Pantar Tent Cities, and Baloi Evacuation Centers with a 24-square-meter houses each made of concrete floors and walls.

It should be a big improvement from the brittle tents that IDPs lived in for about two years during and after the Marawi Siege in 2017.

The tents can be very hot inside when the sun is high and have already become worn out after two years of use. But now the IDPs live day to day with another problem -- their water taps run dry easily.

Marawi’s soon-to-be largest transitory site for the Marawi IDPs overlooks Lake Lanao, Lakeview Boganga Transitory Shelter. And yet the barangay doesn’t have enough water, despite the daily ration of water from the NHA since January.

Solaiman said the water the “bombero” provides could not fill each house’s reservoir. They also do not hose out water to these containers. Instead, the residents scoop water from their improvised water containers to their reservoirs so that their taps could work.

But a whole block is sharing water from a few waste containers. Whenever water is not enough, they would go up and down very slippery dry slopes down to a well which already has moss growing around its mouth to add to their supply of water for cleaning and bathing.

This part of Barangay Boganga in Marawi City is noticeably dry. The soil is yellowish and reddish, and fine like baby powder.

Doing so requires a good amount of strength and foot work to carry a buckets of water. That is why even if the water already has molds growing around it, she has to take a bath right by the well because it is hard to lift the pail to her home.

The water from the tabay and NHA is not drinkable, which is why Cabugatan has to spend about P40 for transportation every day to buy a barrel of potable water in the next neighborhood.

Those who live near the newly installed water pump from the Community and Family Services International (CFSI) and other organizations get more water than the others. Residents from three other divisions that do not have water pumps in their areas have to do pilgrimage to divisions that have one to carry a few gallons of water home, said Imran Lumabao, president of Division 5 of the shelter.

To get water from the water pumps, the residents must abide the schedules when the pumps will work. These schedules are yet to be determined said Lumabao.

The homes in the shelter are in good condition, according to initial assessments conducted by the Mindanao Humanitarian Team.

The United Nations High Commissioner for Refugees (UNHCR) in its Site Protection Profile found that the Boganga Transitory Shelter has four taps per household, functioning toilets and available drinking water, but no adequate water supply. That’s a problem. Insufficient water may result in inadequate sanitation because residents cannot freely clean, wash and flush.

Dr. Emelda Gandamra-Taib, Marawi City Hall Mayor’s Office chief-of-staff, said the Boganga Transitory Shelter was one of the only available lands to build the temporary shelter.

It is a privately owned lot lent to the government under the conditions that some of the relatives of the owner who have lost their homes to the siege in 2017 also be given shelter.

According to Gandamra-Taib, about 1,500 shelters are to be built in the area but will soon increase in number.

Furthermore, the Memorandum of Agreement (MOA) between the local government unit (LGU) of Marawi and the owners of the land states that the shelters will only be there for five years.

Gandamra-Taib furthered that there have already been many efforts to drill water in the area.

However, the LGU has been able to find two areas with water, that is why the distribution of water in the pumps installed by the LGU has schedules and are shared by all seven areas of the shelter. These pumps are regulated by controllers hired by the LGU.

Various private organizations have contributed about $28 million for the Marawi rehabilitation. The money is to improve water, sanitation, and hygiene (Wash), food security and livelihood, shelter, health and nutrition, and protection.

However, Red Cross Lanao del Sur Wash focal person Johanisah Ditucalan said while they are able to provide water for other shelters such as Sagonsongan Transitory Shelter, they are unable to do so in Boganga because their water tank could not fit in the shelter’s narrow roads.

When we visited the site, the bombero did not come today, the residents said.

Cabugatan said he already sent his husband today to get more water from the tabay because they definitely need more water for the house.

Her taps were working, actually. She filled them yesterday with water from the rations. But not today.

“It was a good thing that it rained today,” Cabugatan said. “We can get our water containers out to catch some rain. We are happy whenever it rains hard.”